On 15 December 2016, Croydon’s planning committee met to consider plans for a 17-storey tower in Purley. While the council had previously agreed that a “landmark building” should be developed in the area, the decision was set to be controversial. Objectors included local Conservative MP Chris Philp. When it came to the vote, councillors narrowly approved the application – six in favour, four against.

Four months later, the application was called in by the secretary of state. Rob Pearson, executive director at Nexus Planning and planning consultant for the project, was taken aback. “We’d done all the groundwork,” he says, describing a two-year pre-application process. “It was given a fair hearing at the planning committee. You expect at that point not to be hearing much more about it.”

The idea of building a tower in Purley had evolved over a number of years. In 2013, Croydon Council adopted a local plan document that marked Purley as a district centre and appropriate for tall building proposals. That same year, Purley Baptist Church began working with developer Thornsett Group to explore options to accommodate its growing congregation. In November 2015, the council published a draft local plan document identifying the “potential for a new landmark of up to a maximum of 16 storeys” in Purley. In 2014, Purley Baptist Church submitted plans for a mixed-use scheme including 220 homes, of which 39 were affordable, and a 17-storey tower, spread across two sites (see illustration, below). 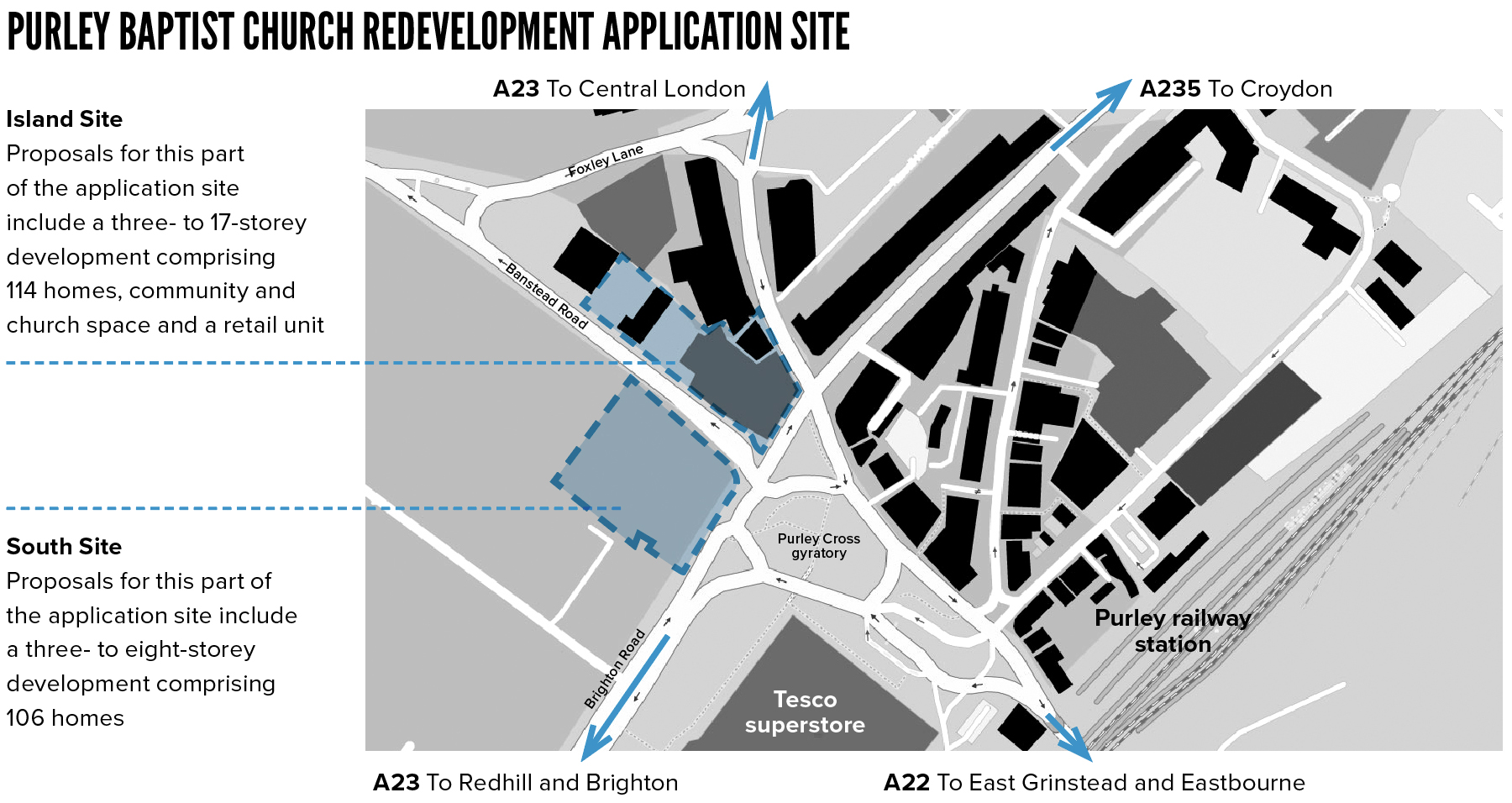 James White, team leader in the Croydon Council planning team, recalls a close working relationship with the development team. Before submission, the proposals were presented to the planning committee on three occasions. “There was sustained scrutiny throughout the pre-app [process],” says White. “That allowed members to get sight of it, but also to play an important role in providing constructive input into the design.”

After Croydon voted to approve the plans and the application was called in, a public inquiry took place in January 2018. In his submission to the inquiry, Philp argued that the proposed tower was of an “excessive height” and would “fundamentally change the character of Purley”. Arguments about the tower continued to play out in the weeks after the inquiry. The development team argued that Croydon planning policy had established the principle that a “landmark building” should be developed in the area. Objectors noted that the policy in question stated any such tower should be “a maximum of 16 storeys”.

In December 2018, then housing secretary James Brokenshire overruled the recommendation of a planning inspector and refused the application, raising “serious concerns” about the scheme’s design, particularly its height. He also concluded that the tower’s height was not in accordance with the development plan.

The development team launched a judicial review of Brokenshire’s decision, aided by law firm Temple Bright and Christopher Katkowski QC of Landmark Chambers. Croydon Council wrote to the High Court to support the challenge. In a statement at the time, the authority said: “Although the proposed 17-storey tower was one storey higher than the local plan, there was no reason to refuse.” In April 2019, the High Court quashed the secretary of state’s decision. According to the council, the minister conceded that he had failed to provide adequate reasons.

With the application to be redetermined, a second public inquiry was held in December 2019. With controversy swirling around the case, both the council and the development team focused on material planning considerations and their central argument that the application was supported by the local plan. “There was a lot of noise around it,” says White.

On the question of whether an additional storey meant the proposed tower was in breach of the local plan, the development team argued: “It is well-established that in order to accord with the plan, a proposal does not have to accord with every aspect of it. Instead, one looks to see whether what is proposed broadly accords with the plan.” Pearson says it was also crucial to highlight the public benefits of the tower. “Without the height, you don’t get the number of houses, you don’t get the number of affordable units, you don’t get the full weight of the benefits of the church,” he says.

In July, housing secretary Robert Jenrick approved the application. The verdict marked the end of a four-year battle to secure planning permission, involving two public inquiries, a judicial review, and two secretary of state decisions. Barring any judicial reviews of the latest decision, the tower will now be built. “This scheme was always going to be controversial, because it is a significantly taller building than any other in Purley,” says Pearson. “We wore that as a badge of honour because we felt that Purley needed that sort of investment.”