On 13 May, housing secretary Robert Jenrick used a written ministerial statement to set out plans for the majority of appeal hearings and inquiries, local plan examinations and other events run by the Planning Inspectorate (PINS) to be moved online. The announcement, which has been widely welcomed, came about two months after PINS in mid-March postponed all planning appeal hearings and inquiries. While PINS has since continued to determine many appeals following written representations, the lockdown has seen the number of undetermined cases increase by 337.

Jenrick’s statement said the government expects all events “to be taking place virtually by mid-June, other than in exceptional circumstances”. But to date just one hearing, an appeal in Cornwall, has been held virtually, leading to criticism that the body has not responded quickly enough and raising questions as to whether it is ready to meet Jenrick’s request.

Despite Jenrick’s statement, which directed that virtual events should be “the default method of operation in the vast majority of cases” by mid-June, PINS appears not to be deviating from its previously stated timetable to roll out the use of virtual hearings and inquiries over a three- to six-month period. Subsequent guidance from PINS, published on the same day as Jenrick’s statement, merely said it hoped that “at least a further 20 examinations, hearings and inquiries will follow during May and June”. Zack Simons, a planning barrister at Landmark Chambers, said: “The idea of virtual meetings starting in earnest at the end of the year seems a long way short of what Jenrick was requiring. There’s no reason this can’t be done quicker.”

In a statement issued to Planning, a PINS spokesman said the body was making “fast progress” but that it was only expecting to develop the capability to conduct fully digital and so-called 'hybrid' events – meaning those that combine digital and telephone procedures with physical attendance – for “most” cases in “the coming months”, as opposed to June. PINS’s statement said that meeting Jenrick’s June target “requires everyone involved in the planning process” – and not just the inspectorate – to “engage proactively”, but did not specify if the body itself expects to meet the deadline. It also revealed that PINS is proposing to use Microsoft Teams as the standard technology platform for virtual events.

In addition, the statement did not specify whether PINS will be able to return to working at full capacity when the digital system is up and running. It simply said being able to deliver cases virtually “enables us to re-schedule postponed cases for delivery sooner” than would otherwise be the case. According to chief executive Sarah Richards, about 10 per cent of PINS’s staff have been seconded to work at the housing ministry. Bob Bennett, chair of the Planning Officers’ Society’s development management network, said it seemed likely the move to a virtual events system was “going to slow them down”.

For PINS to speed up the timetable, a number of practical difficulties will have to be surmounted. Lee Armitage, a director at consultancy Intelligent Plans and Examinations and a former planning inspector, said problems of broken internet connectivity, for example, were “a high risk for the conduct of fair proceedings”. Sarah Platts, current president of the Planning Officers Society, said many of the challenges were similar to those experienced by local authorities with online committees. “It’s problems with broadband, ensuring events are transparent and secure, and the challenge of virtually managing a large group of people,” she said.

For many, the biggest practical concern is ensuring fair access for those without broadband. PINS’s statement makes clear the body is “working hard” to include those with limited or no access to technology. It said: “It is vital that events held virtually uphold the same values of fairness, openness and impartiality as physical events.”

PINS has started writing to those involved in some “potentially suitable” appeals in order to set up case management conference calls prior to arranging virtual meetings. A letter seen by Planning makes clear that PINS is considering how it might “hold these events virtually, including a phone option for those people without internet access”. Its aim, the letter adds, is to “find dates and formats which can be agreed by all parties, without having to impose them”.

IPE’s Armitage said it was right that inspectors ensure an “equality of arms” in access to technology to ensure that fair and equal access to an independent adjudication “should not be undermined in a haste that risks flawed and inappropriate decision making”. Jenrick’s statement, however, states that the government believes there are in principle no legislative barriers to running events virtually. Christopher Young QC, a planning barrister at No5 Chambers, said there were no “legal obstacles” that would leave events open to challenge, provided appropriate notice is given. Practically, Young added, “MS Teams could have been made for cross-examination”.

Many on the private sector side simply want PINS to take the plunge so lessons can be quickly learned and problems ironed out. Mary Cook, partner at law firm Town Legal, called for PINS to publish pilot events online. “They need to get on with it and be transparent,” she said. PINS said it will not publish such events, but it was putting in place guidance and training for its staff. It also said it will be publishing more guidance for participants – including video guidance – and advice “shortly”. PINS said the first event had shown it that “‘traditional’ events cannot simply be converted to online and we cannot expect parties to spend unreasonable lengths of time in front of a screen”. 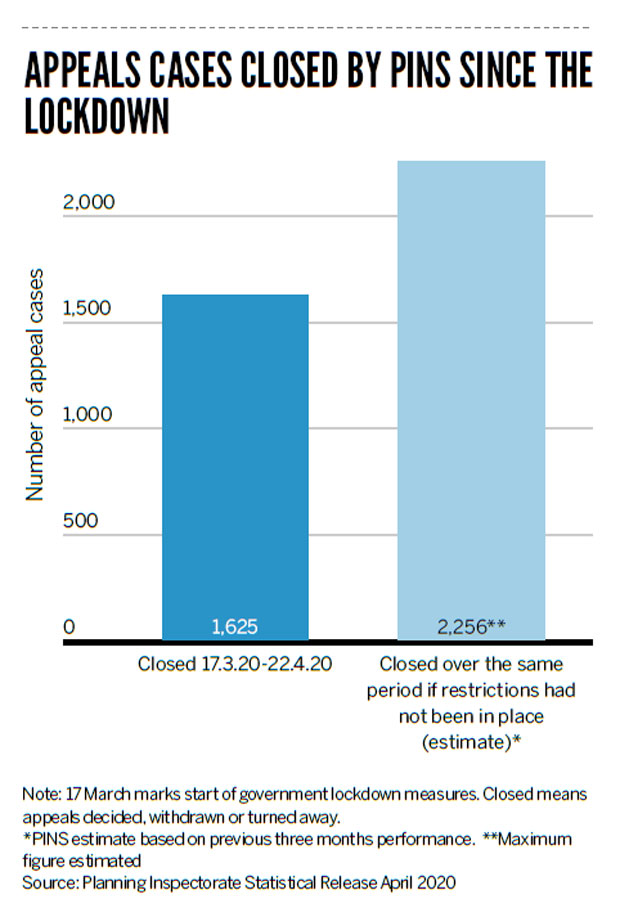