At the end of last month, housing secretary Robert Jenrick issued two important decisions that saw him approve hundreds of new homes on green belt. In his first decision, Jenrick approved plans for 325 homes and a special needs school in the Greater Manchester green belt in Stockport. Just a couple of days later, he granted Oxford Brookes University permission to redevelop its Wheatley campus, about 3.5km outside of Oxford, and turn it into 500 homes. The decisions were the 13th and 14th he has made on residential-led schemes since his appointment last August, of which ten have been approved - all since the December general election - and five refused (see graphic at end of article).

The first of Jenrick's decisions last week saw the Seashell Trust, an educational charity that caters for severely disabled children, win an appeal against Stockport Council's refusal of permission for its scheme in January 2018. Jenrick agreed with planning inspector Michael Boniface's recommendation that the appeal should be allowed on the basis that the authority could only demonstrate a 2.8 year supply of housing land and that "very special circumstances" existed to justify development in the green belt.

In the Wheatley campus appeal, he ruled that while South Oxfordshire council could demonstrate a five year residential land supply, its local plan was out of date. Jenrick concluded that the scheme's contribution to addressing an "acute" need for affordable housing in South Oxfordshire and the benefit of removing the campus's 12-storey tower on the openness of the surrounding green belt both carried "very substantial" weight in favour of the proposal.

"Both cases involve councils which have simply failed to progress an up-to-date local plan - this gives us a good indication of the secretary of state's present thinking," said planning barrister Christopher Young QC, of No5 Chambers, who represented appellant Oxford Brookes. South Oxfordshire's emerging local plan has been the subject of a long-running dispute between the local authority and the secretary of state over the speed of its preparation. Both sites were also allocated for de-designation from the green belt in their respective authorities' draft local plans, but these were afforded limited weight given that the documents have not passed examination.

Another common theme in both decisions was that educational benefits weighed in their favour, according to Tim Burden, director of consultancy Turley. Jenrick noted in his decision letter on the Stockport appeal that the educational benefits from the Seashell Trust's new school, which would be subsidised by the proposed housing, should be given "substantial weight" when determining the application. "They needed a quantum of development to pay for the school and the school didn't have anywhere else to go," said Burden. Similarly, the receipts that Oxford Brookes stood to gain from selling off its campus for housing were given "significant" weight by the secretary of state.

However in both appeals, the most important factor was meeting housing need. Claire Dutch, partner and co-head of planning and environment at law firm Ashurst, said the Stockport decision "swung" on the issue of housing need. Similarly, housing was the key factor in the Oxford Brookes decision, said Jason Lowes, town planning partner at Rapleys. "Even though there was a five-year supply, the fact that there was such a shortage of affordable housing was given strong weight." While meeting housing need in itself is not usually deemed very special circumstances by councils, said Lowes, it formed a large part of the secretary of state's thinking in both of these decisions.

So do these decisions expand our understanding of what counts as very special circumstances? The significant weight given to housing need in the Stockport decision proves that it can constitute very special circumstances, said Dutch. However, while substantial weight was given in both decisions to the provision of affordable housing, other more site-specific factors helped to tip the balance.

Lowes believed that while housing need was probably given sufficient weight in the Oxford Brookes decision to justify consent, other factors were deemed to be important too, such as the benefit of getting rid of the campus's tower that looms over the surrounding countryside. Burden agreed, adding: "It's not saying that residential sites in the green belt are up for grabs - you have to look at the special circumstances of the site and the planning constraints."

Nevertheless, Dutch believes that these two decisions should embolden developers to appeal where a council refuses their plans on green belt protection grounds and the local plan is out of date or the local authority has not allocated five years' worth of housing land. "If plans are not in place and there is such an acute shortage of housing, developers will have no choice but to proceed on very special circumstances and submit an appeal before the plan is in place," she said. "These decisions will encourage developers to do that. It's not a decision to be taken lightly because everyone wants the plan to support their development."

Burden agreed, adding: "It proves that there is a time and a place for being brave in pressing the button on an appeal." But while it is helpful to see the direction of travel of the secretary of state's thinking, he added that too much should not be read into individual decisions. Lowes was wary too about drawing wider lessons. "The issues were very site specific - not all green belt sites have a tower that can be removed."

The appearance of two such major green belt decisions hot on the heels of one another comes at a time when the government faces pressure to ease planning restrictions in order to provide a post-lockdown stimulus to the development market. "The government is keen to try and get the economy going as quickly as possible," said Paul Miner, head of strategic plans and devolution at the Campaign to Protect Rural England. Young pointed out that, in the Oxford Brookes case, Jenrick placed "significant weight" on the economic benefits of the scheme, a factor, he said, that is usually only given moderate weight in decisions.

However, no change of policy on the green belt can be read into the decisions, said Sarah Platts, president of local authority body the Planning Officers Society. "It may difficult to use them alone to draw conclusions that they indicate a change in government thinking on green belt matters." The decisions can be seen in the context of last year's publication of new Planning Practice Guidance on green belt, she added, which outlined the matters planners should take into account when assessing "openness".

Meanwhile, given that many MHCLG planners are understood to have been redeployed internally due to the Covid-19 outbreak, commentators said it was unlikely that there has been sufficient time since the beginning of the pandemic for a change of stance on the green belt to feed through into the secretary of state's decisions. The forthcoming Planning White Paper, which commentators speculated would still be published soon, will show future students at Oxford Brookes and other planning schools whether last week's decisions were outliers or the signals of a change of direction on the green belt. 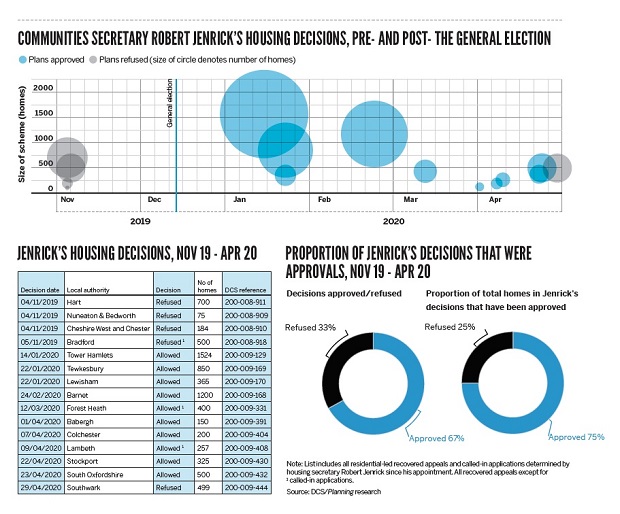