The research, carried out by Planning’s sister organisation DCS, analysed decisions on planning applications for five homes or more over a period of almost two and a half years ending in March 2020. 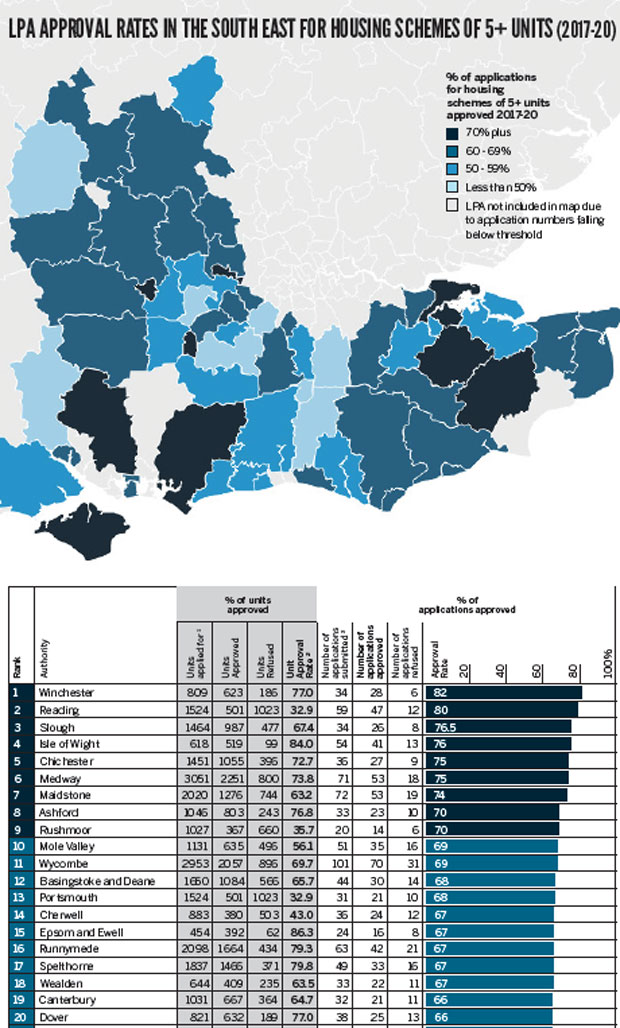 The results suggest that, across all categories of local authority in the region, medium-sized and large schemes have higher approval rates than those of five to 50 units. The data shows that overall, 61 per cent of qualifying planning applications in the region were approved over the study period. The rate was slightly higher for urban authorities, at 64 per cent, and lower for rural authorities, at 59 per cent. Over this two-and-a-half year period, 1,801 applications for five homes or more were approved, out of a total of 2,949 such applications on which decisions were made. Under these decisions, 52,961 housing units were approved and 27,210 refused, representing an approval rate of 66 per cent by unit.

Our 61 per cent figure for the proportion of applications approved in the South East is significantly lower than the official statistics for major (ten or more homes) and minor (nine or fewer homes) applications. Ministry of Housing, Communities and Local Government (MHCLG) figures show that 76 per cent of major applications, and 70 per cent of minor applications in the South East were granted permission between October 2017 and December 2019. The difference is likely to be attributable not only to the difference in the size of the schemes counted and the timeframes, but other differences in our methodology (see panel at foot of page).

The government’s figures show that application approval rates nationally (82 per cent for majors and 74 per cent for minors in 2018/19) are higher than they are in the South East.

Practitioners suggest that the appreciably lower approval rates for the South East are likely to be a combination of a challenging political environment and more extensive planning constraints. “In combination with higher levels of housing need, this presents a more challenging set of planning circumstances for proposals in the South East than elsewhere,” says Matthew Spry, senior director at consultants Lichfields.

Nonetheless, Spry says the lower approval rate is a concern. An approval rate of only 61 per cent, he says, “should be a wake-up call for those who don’t see planning as relevant to the question of how many homes are built.” Spry points out that the cost of embarking on the planning process is “significant”, especially for small to medium-sized developments. “So this scale of uncertainty is a barrier to ramping up housing delivery in one of the least affordable regions in the country,”
he says.

David Bainbridge, planning director at consultancy Savills, says the region’s lower approval rates could be partly explained by “sites that seek to push the envelope in policy terms or don’t get design or technical matters quite right at the first time of asking”, leading to developers having to submit revised plans. 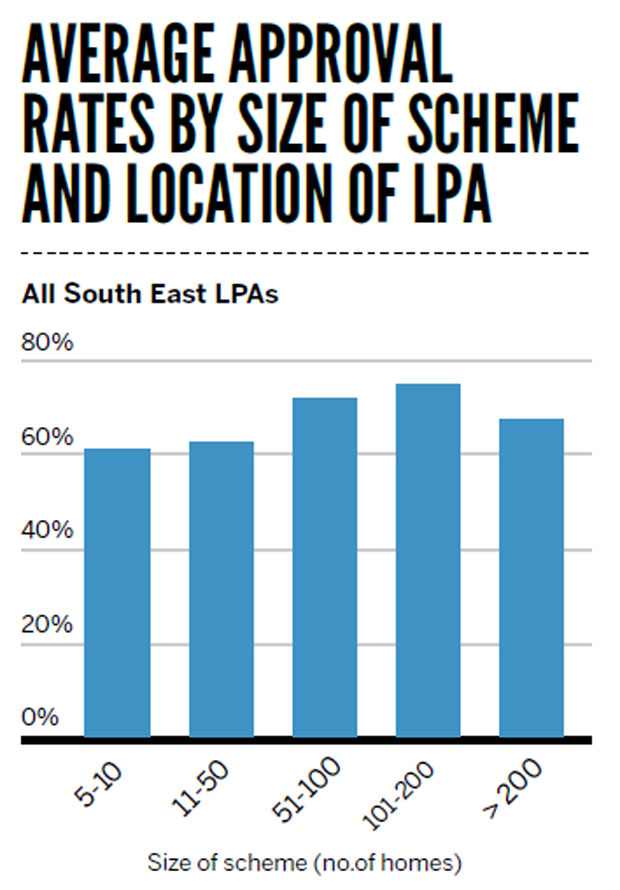 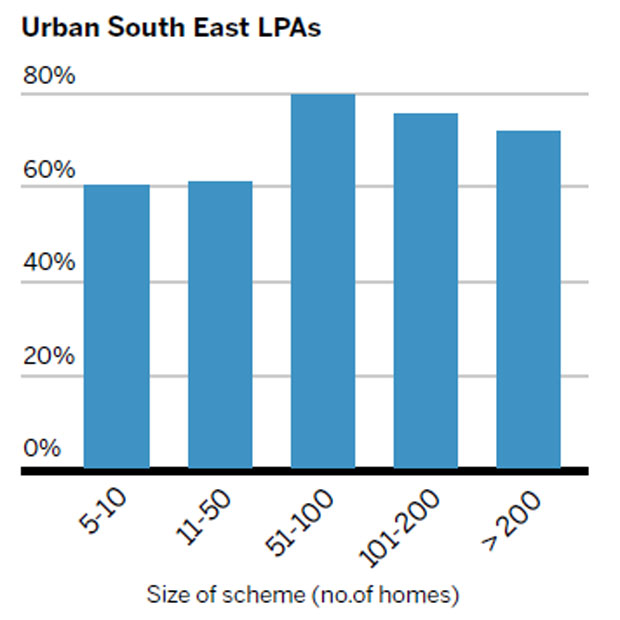 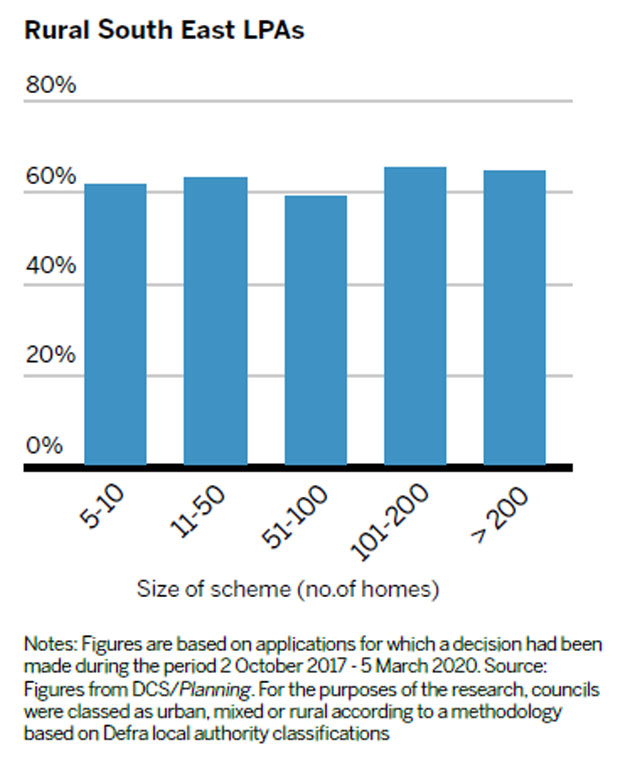 The councils with the highest application approval rates were Winchester (82 per cent), Reading (80 per cent), Slough (76.5 per cent) and the Isle of Wight (76 per cent), with Chichester, Medway and Maidstone close behind.

Some of these are urban authorities with a relatively low coverage of land with major constraints, such as Reading and Slough. But others are more constrained, such as the Isle of Wight and Chichester. At the top of the list, 41 per cent of Winchester City Council’s largely rural area is covered by major planning constraints.

Other authorities receiving a relatively high number of housebuilding applications also maintained a high approval rate. Maidstone Borough Council approved 53 of the 71 qualifying applications decided during the study period. William Cornall, the authority’s director of regeneration and place, says its high approval rate follows adoption of a local plan in 2017, which he describes as being “invaluable in terms of setting out where and how we want development to occur”.

In Maidstone’s case, Cornall explains that the local plan adoption helped lead to higher approval rates as it was coupled with “a much greater emphasis on encouraging applicants to take up pre-application advice, often in the form of planning performance agreements”. The overall result of these actions, he says, has been that the council has “developed a shared culture with our regional development sector partners of getting applications right first time”, avoiding the need for resubmissions.

Another authority with a high approval rate, Rushmoor Borough Council, says its rate of 70 per cent reflects its corporate priority to deliver housing. “Our approach is founded on a sound and up-to-date local plan, adopted last year, and development management procedures that focus on the needs of our customers,” says Marina Munro, the council’s cabinet member for planning and economy. “In particular, we emphasise and promote the use of pre-application advice which is designed to be responsive, add value to projects and ease them through the planning process.”

The South East councils with the lowest approval rates for qualifying housing applications over the study period were West Oxfordshire (29 per cent), Test Valley (33 per cent), Crawley (42 per cent) and Guildford (43 per cent). Tandridge, Mid Sussex, Elmbridge and Bracknell Forest also showed approval rates of less than 50 per cent. All of these bar Elmbridge can demonstrate a five-year housing land supply, with five of them having more than six years’ worth, and one – Crawley – showing a 9.59-year land supply.

A number of factors can explain lower approval rates. At West Oxfordshire District Council, a spokesman points to the council’s recent adoption of a local plan as a factor. He added that, thanks to some difficult decisions made during the plan-making process, the council now has a healthy housing land supply, making it less vulnerable to appeal, and thus more able to ensure applications comply with its planning policies.

A spokeswoman for Elmbridge Borough Council says that it is “a relatively small borough”, with 60 per cent of its area protected by green belt designation and the remaining 40 per cent made up of smaller towns and villages. Consequently, she says, the council receives relatively few applications for five units or more. “Development opportunities in the borough are often on small constrained sites,” she says. “As such, developers are not able to build out generic schemes and many are failing to adapt by providing well-designed schemes.” The authority points out that its record in defending planning refusals at appeal is good, with a 72 per cent success rate at appeals involving qualifying applications submitted in 2019.

Bainbridge lists some of the key factors that tend to lead to high approval rates. “Areas that have an up-to-date development plan, that look to meet their own objectively assessed housing need and have a properly costed infrastructure delivery plan should always have high approval rates and better delivery rates,” he says.

Overall, the approval rate for applications for five homes or more over the two-and-a-half-year period was 64 per cent for urban authorities, 63 per cent for mixed urban-rural areas and 59 per cent for rural authorities. Nicky Linihan, communications manager for the Planning Officers Society, which represents public sector planning officers, points out that in urban authorities, the constraints are different from those affecting other councils. In many cases, she says, there is more likely to be “an in-principle acceptance of development”, with decisions on schemes being more influenced by issues such as relationship to local character, impact on existing residents’ living conditions and local infrastructure issues.

Conversely, largely rural Winchester, the Isle of Wight and Chichester were among the authorities with high approval rates, at 82, 80 and 75 per cent respectively. 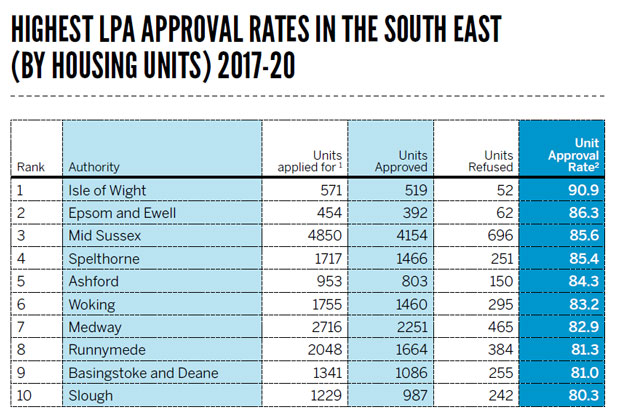 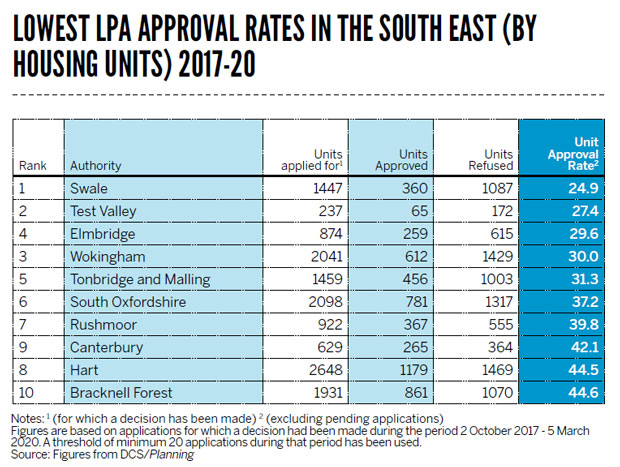 The impact of scheme size

In our study period, schemes of between 101 and 200 homes had a higher approval rate (74 per cent) than any other size grouping. This was followed by a 71 per cent approval rate for proposals of 51 to 100 units. The approval rate for the smallest schemes, those involving five to ten units, trailed behind at 61 per cent.

In urban areas, schemes of 51 to 100 units were also the most likely to be approved, with an approval rate of 79 per cent.

The Federation of Master Builders (FMB), which represents small and medium-sized (SME) construction firms, says the research results confirmed its argument that the planning system was not sufficiently helpful in generating sites of a suitable size for its members. “The planning system is often geared more towards larger developments, and SMEs often feel that it is an uphill battle to get permission,” says FMB chief executive Brian Berry.

Bainbridge suggests some factors that can lead to a higher success rate for larger schemes. “I often find that large strategic sites are more likely to be successful because the gestation period includes significant pre-application discussion and engagement,” he says. “Delivery timescales can be a different thing, of course, but upfront the number of approvals should be higher than for a larger number of smaller sites.”

The figures show that housing applications to South East local authorities affected by a greater extent of major planning constraints – such as green belt, national parks, areas of outstanding natural beauty and sites of specific scientific interest – have a lower than average approval rate. This averages out at 58 per cent for districts where more than 75 per cent of their area is covered by such constraints. Appeals are also more likely to succeed in areas with fewer constraints, our research shows.

Policy constraints are likely to affect approval rates for obvious reasons, says Bainbridge –
“not least for unallocated or unconsented sites, as [the constraints] tend to disapply the tilted balance under the National Planning Policy Framework (NPPF)”. 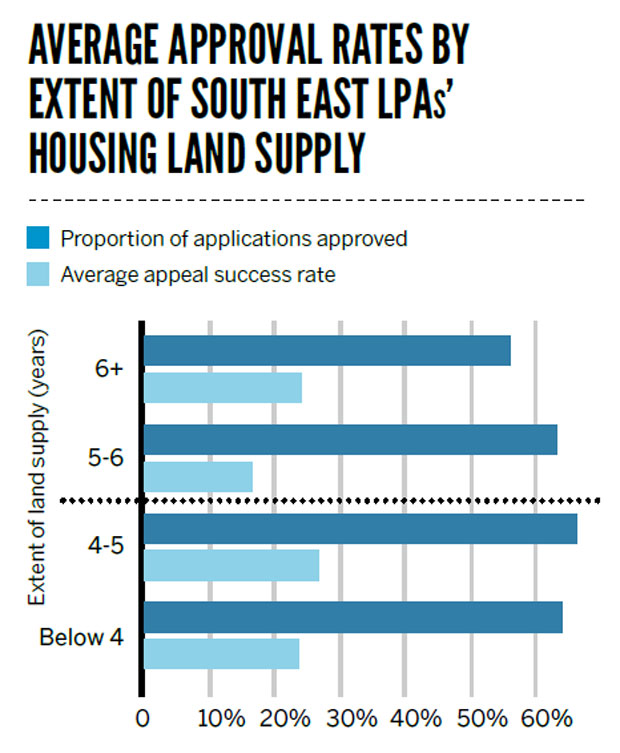 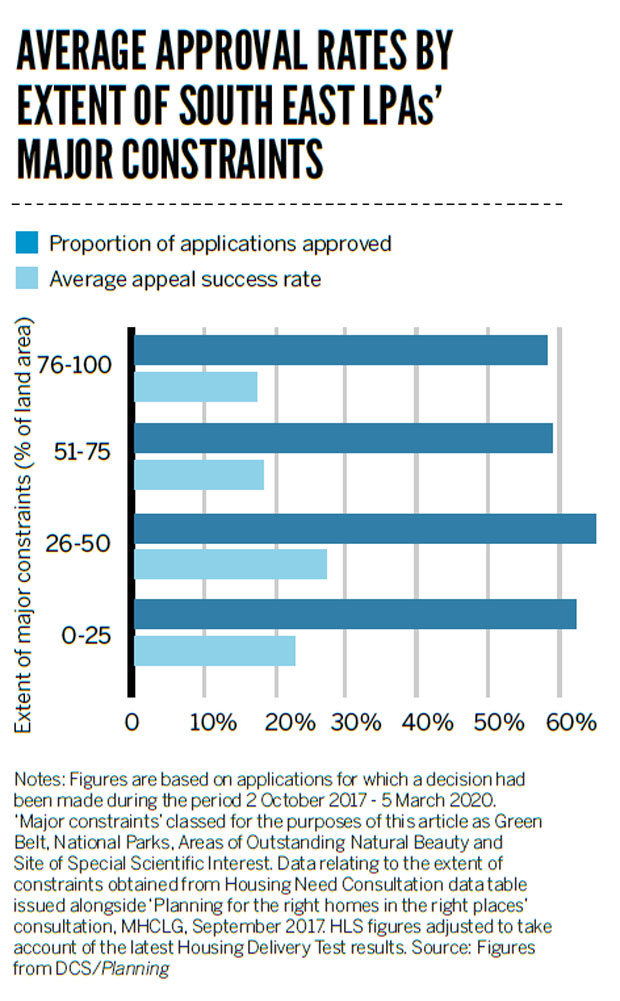 The research presented in this article was carried out by Planning’s sister organisation DCS. It details South East planning authorities’ record in determining planning applications for five or more homes between 2 October 2017 and 5 March 2020.

For the ranking of council approval rates (see map above) and tables (above), the research adopted a minimum threshold of 20 qualifying applications decided during the study period, thus excluding 11 authorities.