Things were shaping up nicely at the beginning of this year, reflects Andrew Bridge, managing partner at multidisciplinary consultants Fisher German. "After a continued degree of uncertainty over the last three years, there was a bit of a bounce and people were genuinely excited about 2020," he recalls.

Apart from a handful of medical experts, few of us were aware then that China had already seen the outbreak of a new strain of coronavirus, which has subsequently brought the global economy to its knees. The dire economic consequences of the pandemic were laid out earlier this month by the Office for Budget Responsibility, which forecast that the ongoing shutdown of business activity across the UK will wipe 35 per cent off GDP this quarter.

For the first part of Planning's exclusive survey looking at how the coronavirus is affecting the consultancy sector, click here.

Against this grim backdrop, Planning has updated its survey on how the planning consultancy sector is responding to the coronavirus crisis. The survey, the initial results of which were published last week, has since been expanded to cover the companies ranked 21 to 40 in the 2019 Planning Consultancy Survey by the numbers of chartered town planners they employed last September. Some 13 of the top 40 practices have responded (see pie charts below). 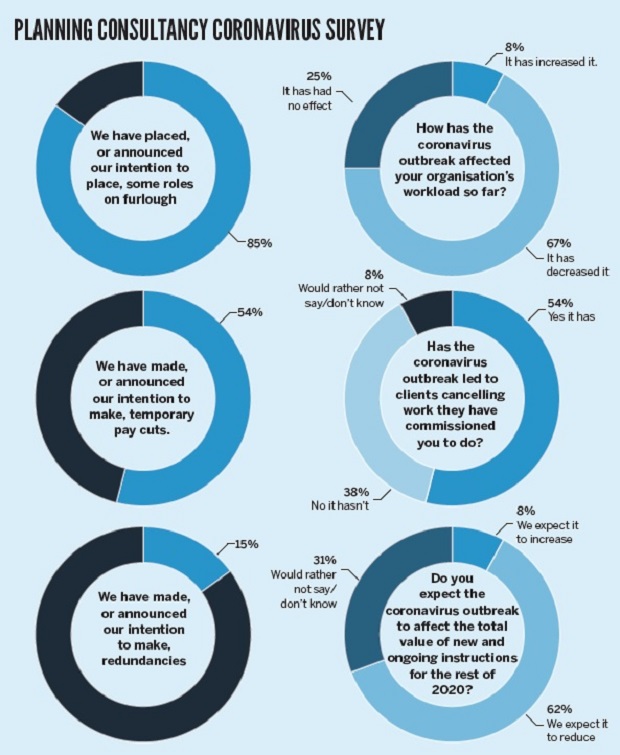 The most common response from planning firms has been to take advantage of the government's furlough scheme. This pays 80 per cent of wages for staff whose workload has tailed off as a result of the dramatic restrictions on economic activity announced by the prime minister last month. Eleven consultancies reported that they have already placed some roles on furlough or intend to do so, leaving only two who say they have not. Seven said they have announced or intend to make pay cuts but only two consultancies said they are making staff redundant.

Fisher German has furloughed staff with the objective of keeping the company going through the current difficult period, according to Bridge. "We are sharing the pain to protect the core business, so that when the light at the end of the tunnel becomes brighter and bigger we will be in a stronger place to be able to get back to business and move forward."

A similar approach is being taken at planning and design consultancy Barton Willmore, said joint senior partner Mark Sitch. "We are furloughing a number of our people as we focus on staying flexible and using all the options available to us to support clients, individuals and the longer-term position of the business. We will be ready for the restart and the actions we are taking now will contribute directly to our capability post COVID-19," said Sitch.

Philip Smith, board director for planning at LUC, said the firm has so far only announced voluntary furloughing. The employee-owned practice’s relatively small size means that it has been able to tailor employees’ hours to available workload more easily, rather than seeking blanket reductions, he added. "Our priority is to continue to deliver the project work and provide continuity of staff input," Smith reported. LUC, which derives around 80 per cent of its workload from public sector clients, has seen its existing projects continue "largely unchanged", he added.

Although the rapidly unfolding nature of the crisis makes the situation very hard to predict, Bridge said Fisher German has not made any redundancies across its 600-plus team. "Touch wood that position remains the same as long as physically possible. It's very difficult to gauge because nobody truly understands the ramifications for the economy as we start to come out of this crisis period."

Seven of the 13 consultancies giving a view report that the coronavirus outbreak has led to clients cancelling work, against five reporting that they have retained pre-crisis instruction levels so far. Fisher German hasn't lost any existing work, although Bridge said new work has slowed down. "We have teams that are busy and we're very fortunate that we have some incredibly loyal clients who are progressing what they can. Some schemes have been brought forward because there is an opportunity for them to stand back and realign some of their priorities."

Eight firms in the survey said the pandemic's outbreak has reduced their firm's workload so far, with three saying it has had no effect. In addition, seven firms expected the outbreak to reduce the total value of new and ongoing instructions for the rest of 2020. Jacobs, which focuses on infrastructure planning, is the one firm surveyed that expects to see its work increase during the current crisis. "Clients like Highways England are saying that they need to get projects shovel-ready," said Suki Coe, director of town planning at the company.

Clients and architects are focusing on infrastructure-related rather than residential projects, Coe said. She pointed out that much infrastructure construction work can be carried out in the open air, which makes it relatively to carry on or resume jobs with relatively straightforward social distancing measures. Bridge painted a similar picture at Fisher German, which generates around a third of its work from infrastructure-related projects. Jobs for utility clients tend to be large schemes with long lead-in times and these have been largely unaffected, he said.

Coe said Jacobs has been pressing the Planning Inspectorate not to slow down work on infrastructure applications, much of which can be carried out on a desktop basis. "It's so we will have some things ready to go when we emerge from this and get the economy going again," she said. "I've long worried that infrastructure has lagged behind housing because it has to go through such a painful planning process and takes a long time. Maybe, ironically, this is an opportunity for infrastructure to catch up [with housing]."

While larger developers are continuing work on strategic projects, Bridge said he found that smaller developers are tending to delay. "There is undoubtedly an impact because individuals and smaller organisations are thinking what it means for them and their financial position and putting things on hold," he said. But once the current health crisis eases, he hopes it will be possible to recapture some of the optimism that was circulating at the beginning of the year. "As we start to come out of this crisis period, we hope we can get some of that back."

*NOTE: this article was updated at 1pm on Wednesday 22 April to clarify that Suki Coe at Jacobs mentioned Highways England as one of its clients, not Homes England. Coe is also not a member of the National Infrastructure Planning Association board.