Seasonally adjusted figures published by the Ministry for Housing, Communities and Local Government show there were 34,260 housing starts during the three months to the end of December 2019, down 11 per cent on the previous three months, and a 17 per cent decrease on the same quarter in 2018.

Completions remained relatively stable at 44,980 for the quarter, down one per cent from the previous quarter but up three per cent compared to the same period a year ago (see MHCLG chart below). 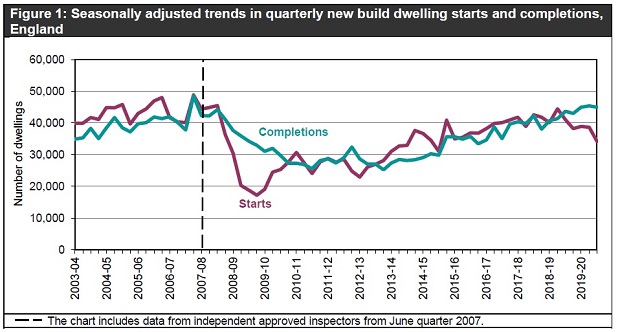 Completions in 2019 totalled 178,800, an increase of nine per cent compared to the year before.

Clive Docwra, managing director at construction consultancy McBains, said: “The government’s ambitious housebuilding target – delivering a million homes in the next five years – was always going to be extremely challenging, and the latest statistics bear this out. However, the impact of the COVID-19 pandemic will mean this is now virtually impossible.

“Many sites are empty, supply chains have been disrupted and multi-million pounds worth of private investment is on hold for the foreseeable future. That will knock back housebuilding rates months, if not years.

“The government has already announced an unprecedented package of measures to help support business, but once we’ve turned the tide on the virus, further help, such as tax incentives, will be needed to get the UK building again.”