Our annual report found that 13 of the 25 largest legal planning teams report an increase in qualified planning solicitor numbers since last year’s survey. Meanwhile, six have the same number and six record a drop.

As of the end of February, the 63 firms providing information were fielding 720 qualified solicitors, including 226 partners.

Meanwhile, several of the largest firms report significant growth in the number of specialist planning lawyers they employ (see table, below)

Pinsent Masons, the largest firm, says it has increased its solicitor numbers from 79 to 88.

Meanwhile, Town Legal, in joint sixth place, has gone up by seven from 14 to 12, an increase of 50 per cent.

Also in joint sixth, Burges Salmon has grown its planning team from 16 to 21 solicitors. 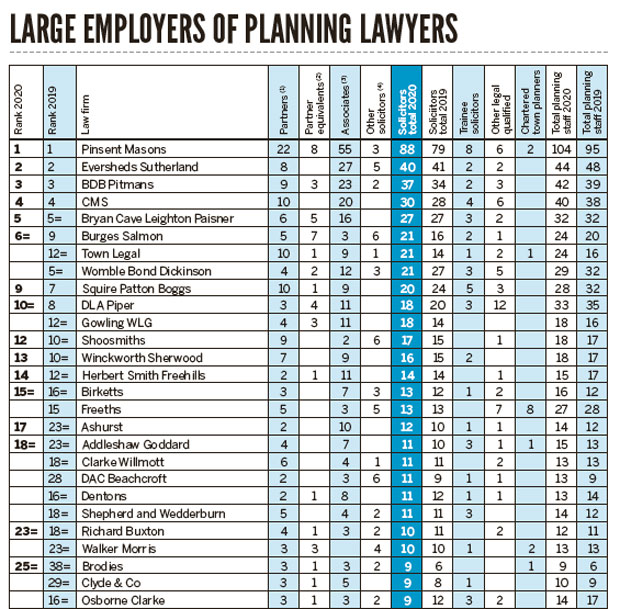 In other parts of the survey, Town Legal continues to be the most highly-rated planning law firm with Pinsent Masons in second and Eversheds Sutherland third.

In the individual solicitors' rankings, Simon Ricketts of Town Legal is still at number one, a place he has occupied for more than a decade.

Ian Ginbey of Clyde & Co has entered the top five along with Rickett's colleague Clare Fielding.

In the barristers' categories, Christopher Katkowski QC, of Landmark Chambers, returns to the top of this year’s table of planning QCs.

Among junior barristers, Richard Turney of Landmark Chambers retains his place at the top of the table, while Zack Simons, also at Landmark Chambers, and Rebecca Clutten of Francis Taylor Building are in second and third respectively.