The annual Planning Law Survey highlights established excellence and rising talent among barristers working in the field. First published in 1998, the survey reflects the views on barristers of solicitors, consultants, developers and councils. This year, more than 200 voters took part. Around 44 per cent of respondents are legal professionals and another 40 per cent are consultants, with the remainder split between developers and local authorities. Their opinions have seen some familiar names returned to the top of the barristers’ rankings, but have also given increased prominence to several members of a new generation.

Top of the table

Christopher Katkowski QC, or “KitKat”, as he is known to many, returns to the top of this year’s table of planning QCs (see table, below). For the past half-decade, the top two positions in our rankings have been occupied exclusively by the Landmark Chambers’ silk and Martin Kingston QC of No5 Barristers’ Chambers. However, Katkowski can just claim an edge, taking first place in three of the last five years. Kingston took the top spot last year in what would turn out to be his last appearance in the table – in January, he announced his retirement after five decades of legal practice.

Rupert Warren QC of Landmark Chambers takes joint second alongside Christopher Young QC of No5 Barristers’ Chambers, who has continued his rapid rise up the rankings after debuting at joint tenth in 2018, the year in which he was called to the bar.

Rounding out the top five

Next in the table is Paul Tucker QC of Kings Chambers, who rises an impressive eight places from 12th to fourth in this year’s rankings. Tucker is “very approachable and client-focused”, says one solicitor. “He gets the importance of commerciality in formulating his advice.” His clients include Moda Living, which he represented at the Brighton Community Infrastructure Levy examination, and Liberty, for whom he acted at public inquiries into proposed developments including an Eddie Stobart national distribution centre in the Warrington green belt – a decision from the secretary of state is pending. Another solicitor says Tucker “can never do enough for you, such that you feel you are his only client, even though he is busier than ever”.

Fifth place is taken by James Maurici QC of Landmark Chambers, who was fourth equal in last year’s survey. In the past 12 months, he has represented Royal Botanic Gardens, Kew in its role as an objector to the 32-storey Chiswick Curve development at the High Court and promoted the expansion of Oxford University Science Park as part of the Cherwell local plan review. Other clients include the Department for Transport, for whom he has acted in relation to judicial review challenges of its Airports National Policy Statement, on grounds including the impact on habitats. Maurici is “an intellectual heavyweight”, says one solicitor. “I view him as the expert on issues arising under the Habitats Directive.”

Neil Cameron QC of Landmark Chambers, who rises to seventh place from 15th, is notable for his “absolutely meticulous” preparation and “unmatched feel for the best approach to arguing difficult points”, says one solicitor. Another says Cameron “leaves no stone unturned”, adding: “His cross-examination of witnesses at public inquiries is highly impressive.” One recent inquiry involved contesting the refusal of plans for Burgess Business Park in Southwark. Cameron also promoted the Transport and Works Act order application for the Wednesbury to Brierley Hill tram extension and acted alongside Zack Simons in a Supreme Court case that established a community fund donation cannot qualify as a material planning consideration.

Michael Humphries QC at Francis Taylor Building and Charles Banner QC of Landmark Chambers move into the top ten silks list, from 11th and 13th respectively last year to joint eighth alongside Morag Ellis QC of Francis Taylor Building.. One solicitor observes that Humphries is “always calm under pressure and delivers advice succinctly”. His work has included leading the counsel team promoting a new runway at Heathrow Airport, offering pre-development consent order (DCO) application advice on plans for a nuclear power station in Anglesey and acting for RiverOak Strategic Partners on their plans to reopen Manston Airport in Kent.

Banner serves as lead counsel for Heathrow West in relation to plans for a sixth terminal. He appeared for the transport secretary to successfully defend a judicial review brought by Stop Stansted Expansion and acted for Arora Group as an interested party in the judicial review challenges to the Airports National Policy Statement. In non-aviation cases, he has appeared at planning inquiries for housebuilders including Persimmon and CALA. One solicitor says: “Charles has a rare quality of being very approachable and commercialminded, yet at the same time having an extensive and superior knowledge of the planning system.” 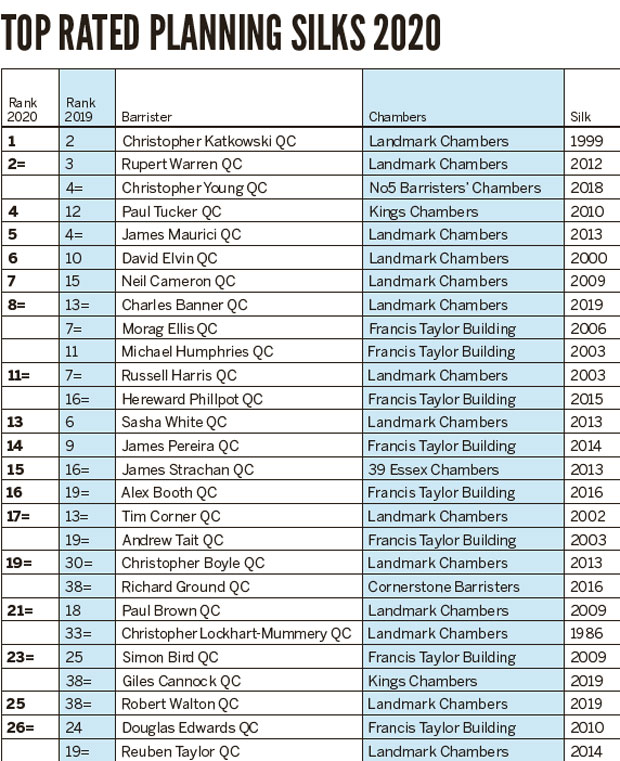 Best of the juniors

Richard Turney of Landmark Chambers retains his place at the top of the juniors’ table (see table, below) for the second year running, after rising from joint fifth in 2018 and joint 16th five years ago. Zack Simons, also at Landmark Chambers, and Rebecca Clutten of Francis Taylor Building have swapped places – Simons claims second while Clutten takes third place. Clutten marks her fourth year in a row among the top five juniors. Simons, having made his debut in the top five last year, has risen from joint 17th in the table just two years ago.

Fourth place in the juniors table is occupied by Melissa Murphy of Francis Taylor Building, a barrister described by one legal colleague as “technically excellent” and “very good on tactics and strategy”. In one notable case, Murphy acted for the National Trust as an interested party to an appeal in which she helped persuade the court to uphold refusal of permission for a redevelopment of the grade I listed Bramshill House in Hampshire. In another, she represented the London Borough of Hillingdon at a judicial review opposing works linked to the High Speed 2 rail link.

Rising 11 places, from 17th to joint sixth, is Richard Moules of Landmark Chambers. Described by one solicitor as “good on his feet, calm and considered”, Moules acted for the government to defend its refusal of permission for 470 homes in Kent, in a case that produced a seminal judgment on the consideration of air quality. In another case, he defended Newcastle City Council’s decision to grant one of the largest residential planning permissions of 2019. One solicitor praises his “clear and commercial advice” on “technically complex planning issues”.

Also joint sixth is Scott Lyness of Landmark Chambers, who became a QC after our survey was conducted. Lyness promoted the City of York Local Plan at examination, paving the way for the authority’s first development plan since 1956, and acted for Historic England at an inquiry focusing on the heritage impacts of a proposed 18-storey tower close to Royal Botanic Gardens, Kew. One solicitor says: “His easy style and great client bedside manner belies a strong cross-examination technique and unfailing work ethic.”

Richard Honey of Francis Taylor Building has moved up to joint eighth place from joint 11th last year. Honey is described by one voter as “very thorough, very bright”. His instructions have included acting for the government on a series of cases, including a successful defence of the Guildford local plan in the face of three judicial reviews and the dismissal of a High Court challenge to the communities secretary’s refusal of permission for 600 homes in Greater Manchester. A legal colleague commends his “readily accessible style, for both public sector and private sector clients”. 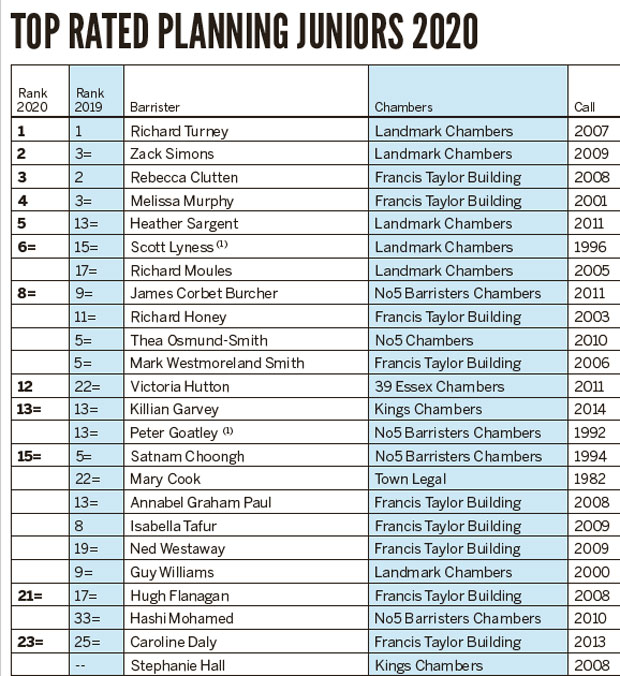 Zack Simons of Landmark Chambers leapfrogs his contemporaries to take the top spot in our table of the highest rated juniors under the age of 35 (see table, below), up from joint fourth last year, pushing every other member of the top five down one place. Rebecca Clutten of Francis Taylor Building is in second, meaning that she has spent five years in one of the top two under-35s positions. Heather Sargent of Landmark Chambers is in third, Thea Osmund-Smith of No5 Barristers’ Chambers takes fourth and Killian Garvey of Kings Chambers rounds out our top five.

Another notable performer in the under-35s table is Caroline Daly of Francis Taylor Building, who rises from eighth place last year to joint sixth this year. Recent work includes acting for the successful local authority in an inquiry concerning an application by a private school to modify a maximum limit on its pupil numbers set out in a section 106 planning obligation. She also acted, as junior to Gregory Jones QC, in a successful judicial review of Craven District Council’s adoption of affordable housing guidance.

Sharing joint sixth position is Victoria Hutton of 39 Essex Chambers, who climbs from 13th equal last year. She recently successfully defended Wealden District Council’s refusal of a mixed-use urban extension, comprising up to 700 dwellings, 8,600sq m of employment floorspace and various community facilities, at Polegate in East Sussex, despite the lack of a five-year housing land supply. Last year, acting as junior to John Steel QC, she succeeded in gaining planning permission with a full award of costs for new sports and science facilities at Harrow School.

Also breaking into the top ten this year is Ashley Bowes of Cornerstone Barristers, rising from 17th equal last year. According to his chambers, his recent work has particularly focussed on the issues arising from residential schemes, determining housing land supply, residential development on the green belt, promoting sites through local plan examination and the application of the presumption in favour of sustainable development. 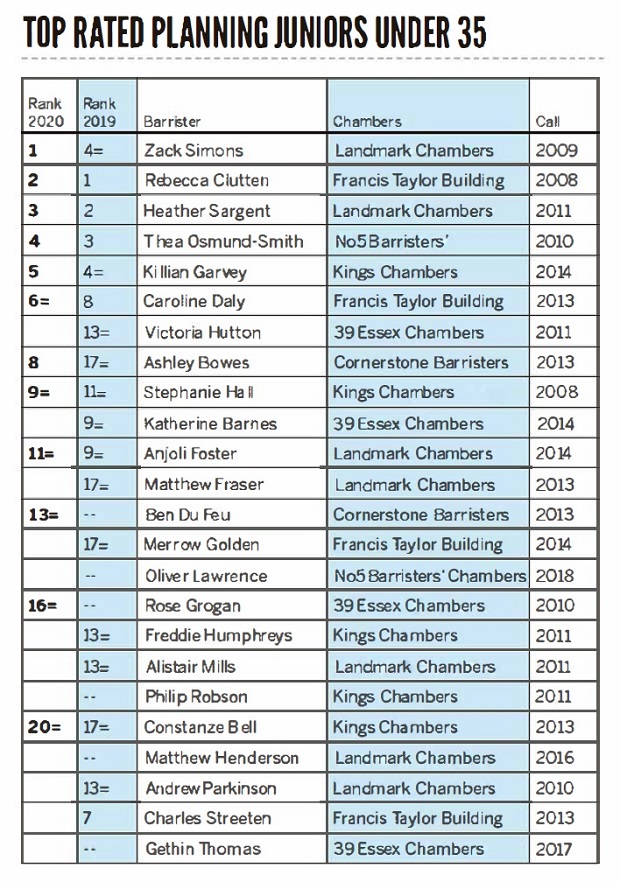 The Top under 35s: Profiles

Michael Humphries QC “brings a wealth of knowledge and experience to the development consent order regime”, says one solicitor. He tops our rankings of infrastructure QCs after a year in which he acted on projects ranging from airport expansion to nuclear power stations and major highways works.

Chris Young is named the highest-rated QC in the residential sector. He is “the go-to QC for major housing inquiries”, says one consultant, adding: “He wins cases through a combination of attention to detail, close collaboration with the team and massively effective cross-examination.”

Christopher Katkowski QC is described by a legal colleague as “one of the most popular, approachable and successful advocates at the planning bar”. He tops our rankings in the commercial and retail category. 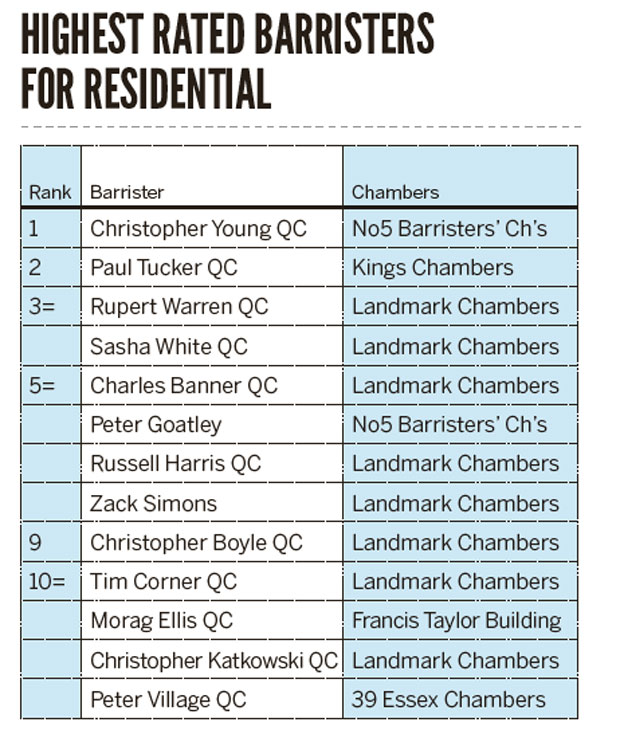 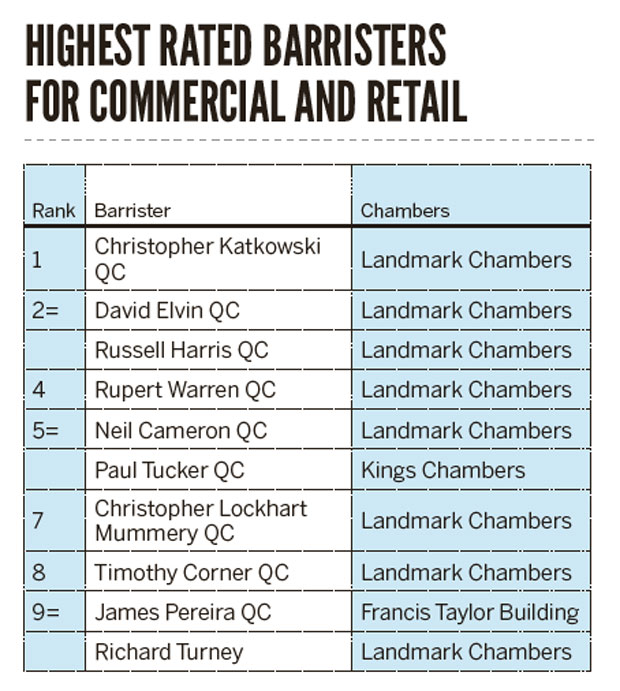 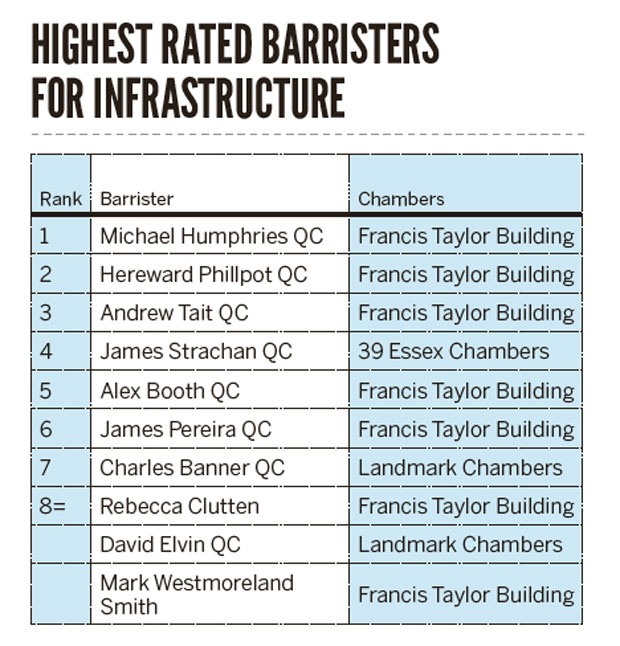