Khan's political foes have frequently attacked his housing record. Last month, on the same day that the mayoral election was postponed, communities secretary Robert Jenrick ordered Khan not to publish the new London Plan until "missed opportunities to increase housing delivery" were rectified. In a letter conveying his directions, Jenrick said "housing delivery in London under your mayoralty has been deeply disappointing", pointing to completion figures of little more than half of Khan's original target of 65,000 per year.

Khan's manifesto promised he would set a target that 50 per cent of new homes be affordable, and deliver a "step change" in housing supply with thousands more homes built each year. In fact, Khan's flagship policy has been the introduction of a 35 per cent affordable housing threshold above which schemes can benefit from a "fast-track" planning approach. So, what difference have Sadiq Khan's planning policies made, and has the threshold approach led to more affordable housing without compromising delivery of housing overall?

It's not hard to build a case that Khan has failed to deliver his housing promises. Most stark, perhaps, is government data showing Khan actually has delivered lower average annual affordable housing starts than Boris Johnson managed over his two terms. 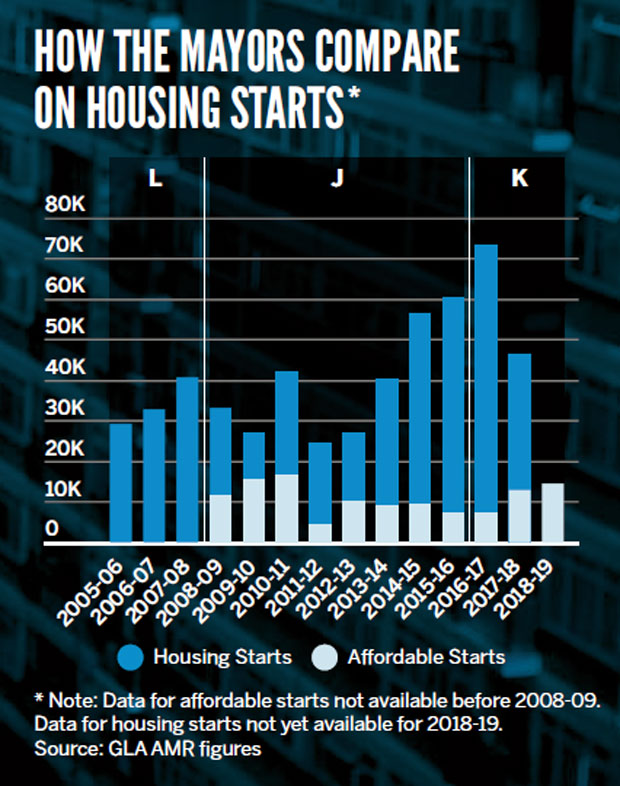 Furthermore, 2017-18's Greater London Authority Annual Monitoring Report (AMR) reported the net number of homes given permission had fallen to just over 65,000, its lowest level since 2014-15; starts were down 37 per cent on the prior year, to just over 46,000; and overall completions were 10,000 homes short of the London Plan target. 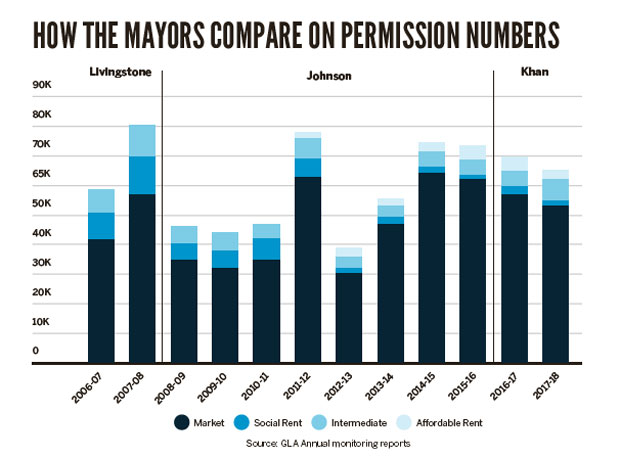 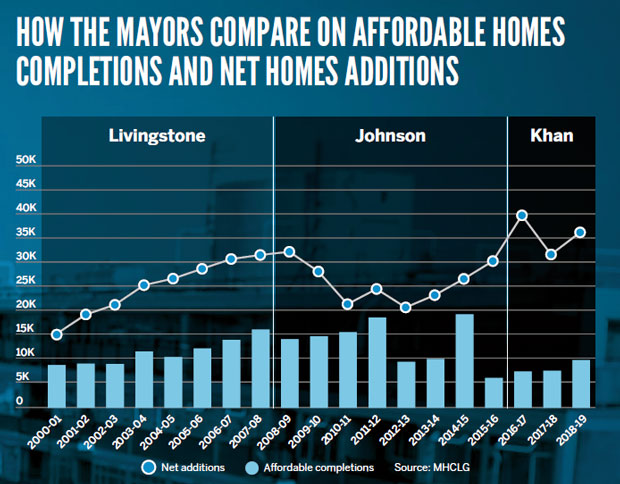 Pascal Levine, partner at London viability consultant DS2, says Khan has been unfortunate in inheriting a relatively weak London housing market, making many developers less active. "It's been a tough three or four years in London. Brexit has played a part, and [stamp duty] tax changes have hit people hard," he says.

However, the reality, as ever, is not quite as clear cut. Partly this is because of the lag in publication of the official AMR numbers, which only run to the 2017-18 financial year, less than two years into Khan's tenure. Some more recent figures – though without the GLA "official" stamp – are available from the Homes Builders’ Federation (HBF) and a live GLA database, the London Development Datastore. These suggest the number of permissions has been increasing more recently, while central government data on starts and completions likewise suggests a modest recovery. 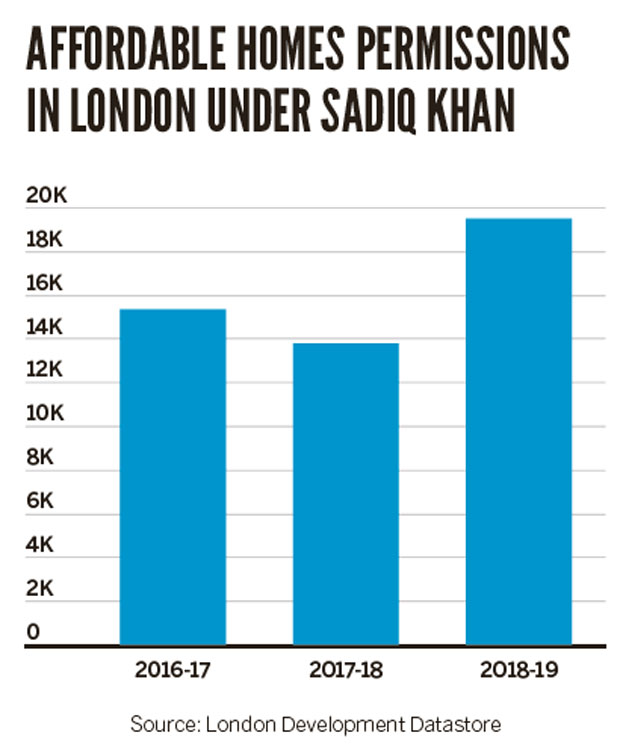 Trying to assess Khan’s performance through data is inherently tricky, given the length of time it takes schemes to go through the development cycle. The mayor’s crucial policy, the Affordable Housing and Viability Supplementary Planning Guidance (SPG), was only published in August 2017, and his proposed changes to the London Plan are even now not adopted, let alone taken up by all boroughs. Hence, the vast majority of homes built – particularly in major schemes – under his mayoralty will have been permitted under Johnson-era policies.

Nick Taylor, partner at consultant Carter Jonas, compares Khan’s task to turning a supertanker. “Has what the mayor’s said had a positive effect? Yes. But is it feeding through yet into delivery figures? It’s not clear yet.” Taylor is by no means alone, however, in saying that Khan’s drive for affordable housing has significantly changed developer behaviour. Steve Barton, strategic planning manager at Ealing Council, describes it as a “fast and early win” that was a “step-change” in providing certainty and clarity on affordable housing. Where previously developers negotiated down their obligations to provide affordable housing, DS2’s Levine says this policy has “completely changed everything”, leading developers to offer more affordable housing as standard.

Claire Dutch, partner at law firm Ashurst, says the SPG has actually made the situation much clearer for developers. “Largely our developer clients appreciate the certainty,” she says. Dutch is not the only professional adviser who reports many clients opting to take the 35 per cent fast-track route. 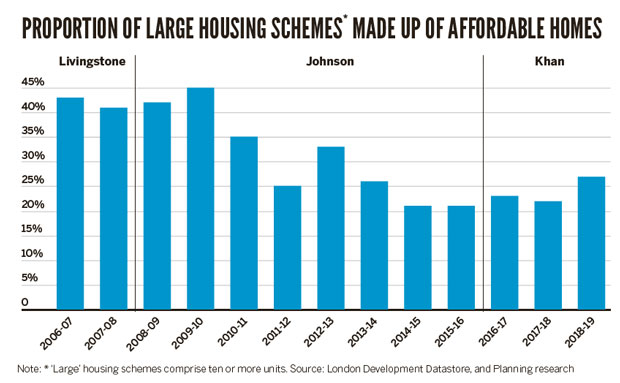 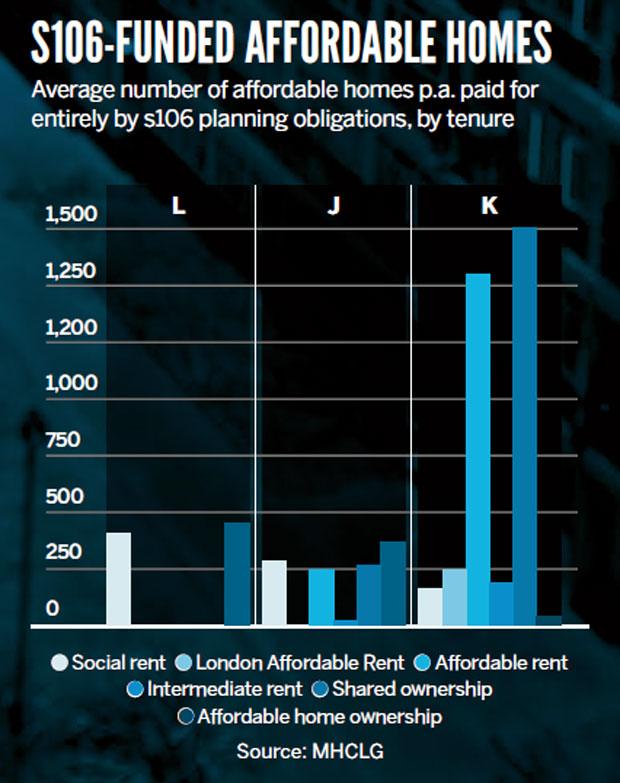 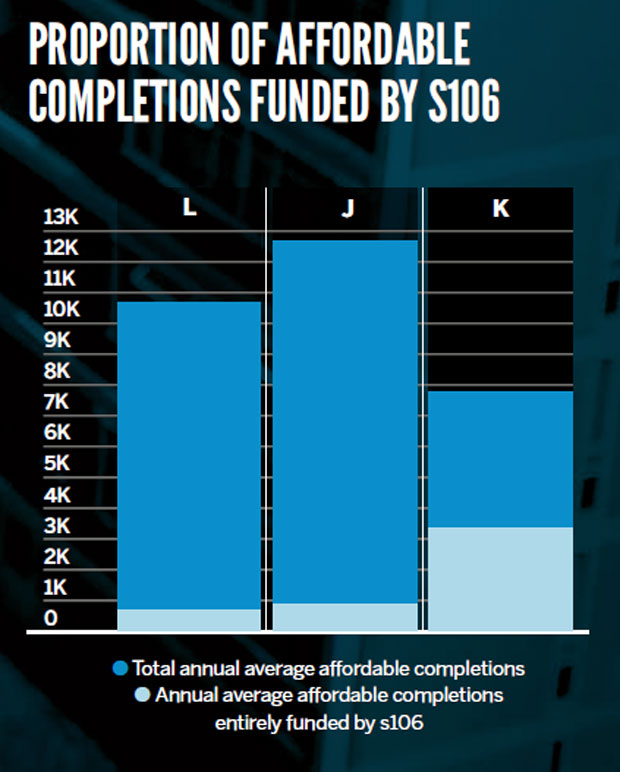 And the emerging data seems to bear out that a change is happening. London Development Datastore figures show that, after the average proportion of affordable housing on schemes of ten units or more fell as low as 21 per cent under Boris Johnson, it rose back up to 27 per cent in 2018/19 and is running at 28 per cent so far this year. In addition, a spokesperson for the GLA said the average proportion of affordable homes on schemes large enough to be referred to the mayor – generally of more than 150 homes – had risen to 37 per cent so far in 2019-20. Three-quarters of such schemes, he said, were now meeting the 35 per cent target.

Ealing MP James Murray, who until late last year was Khan’s deputy mayor for housing, claims the policy has been a great success, and maintains the struggle to shift the dial on market housing overall is down to lack of government action. “The level of affordable housing is right back up, it’s really making a difference. But this success has exposed the clear limit of how much the mayor can do without further government support in the form of funding and powers.”

Murray also claims the policy has reduced the price paid for land, as developers factor in the need to pay for affordable housing up front. “Generally now housebuilders are buying land assuming 35 per cent affordable housing,” says DS2’s Levine.

Too much focus on the headline affordable figures?

If anything, the principal objection to Khan’s tenure is that the 35 per cent threshold has been too rigidly enforced. Michael Bach, planning chair of the London Forum of Civic and Amenity Societies, says affordable home provision “overrides all other concerns” such as tall buildings policies, while Ealing Council’s Barton says Khan has been “too focused on the headline figure at the expense of genuinely affordable housing.”

The private sector objection is that rigidity about the 35 per cent threshold is endangering delivery. Anthony Lee, head of UK development consultancy at BNP Paribas Real Estate, says: “Quite a few are using the 35 per cent route, but the question is whether these permissions are being built out.” Both Lee and Pascal Levine say the weight of obligations on residential schemes is making land for office or hotel development more valuable, leading developers to ditch housing projects. Elizabeth House outside Waterloo station is one major example of a former residential development scheme which has now been reworked into an office development. “Commercial developers can now frequently outbid residential in the land market. If the mayor wants to avoid a big shift away from resi, he may need to be more flexible,” says Lee.

Former deputy mayor James Murray says this complaint “fundamentally misunderstands” the mayor’s policy. “If schemes aren’t viable at 35 per cent then they can go through the viability tested route, so they’re no worse off than before,” he says. However, one consultant, who did not wish to be named, said this was not necessarily the case. He said the GLA was now effectively insisting upon 35 per cent on all schemes, by threatening to oppose major applications not delivering 35 per cent even when developers could demonstrate they weren’t viable. The GLA was contacted to comment, but did not respond to this point.

However, an appeal decision (DCS number: 200-009-170) over a site in south-east London published in January appears to support the idea the GLA is not always being reasonable on this issue: finding in favour of the developer, the inspector said the GLA offered “no evidence whatsoever” to support its contention that more affordable housing could be produced.

There is little doubt, then, that Sadiq Khan’s tenure has changed the residential development atmosphere in the capital. But whether Khan’s apparently successful insistence upon higher levels of affordable housing actually impacts upon the overall delivery of homes is a question on which Carter Jonas’s Taylor says the jury is still out. “Yes, the mayor has got tough. Whether it’s stopping sites coming forward is too early to say.”

The Labour mayor has been in power since 2016. His most significant intervention in planning policy for homes has been the publication of the Affordable Housing and Viability SPG in August 2017. As well as introducing the fast-track planning route for major applications meeting the 35 per cent affordable housing threshold, this also introduced a new approach to viability testing schemes which made it much harder for developers to wriggle out of affordable housing obligations. With the SPG technically applying now only to “referable” schemes – those over 150 units – Khan is aiming to embed these policies in his update to the London Plan, which the government says is not yet fit to publish. He has also made use of his “call-in” powers on referable applications, often acting to push through schemes rejected by boroughs, at the same time as securing higher affordable housing provision.

WHAT THE DATA SAYS ABOUT THE MAYOR'S RECORD

On overall housing completions, the metric which is politically most powerful, Sadiq Khan has outperformed his predecessor with an average of more than 35,000 net additions versus just 26,000 under Boris Johnson. But the proportion of those that are affordable housing stands at just 22 per cent under Khan, despite all his rhetoric on this issue, compared to 49 per cent on average under Johnson. Boris Johnson’s record on overall completions is unfairly diminished by his happening to be mayor during the credit crunch, while his record on the proportion of affordable housing is unfairly flattered by the same factor. But drawing conclusions now about Khan’s policies from completions numbers is pretty meaningless: nearly all these units would have been permitted before he became mayor.

The picture on starts, reliable data on which only runs to 2017- 18, is similar; on annual average overall Khan is 54 per cent ahead of his predecessor, benefitting in part from lots of permissions gained during Johnson’s mayoralty; on the proportion of affordable housing, he is behind, at an average of just 17 per cent against 27 per cent. However, there is evidence that Khan’s focus on affordable housing is beginning to bite. Where affordable starts consistently fell during Johnson’s latter years, they have risen every year since Khan was elected.

Planning permissions are the most relevant metric by which to assess Khan’s policies. Again, according to the London Development Datastore, he on average saw more units permitted overall than his predecessor, while under Johnson boroughs approved a higher proportion of affordable homes (25 per cent vs 21 per cent).

But the proportion of homes permitted that were affordable fell during Johnson tenure – from a high of 38 per cent to a low of 19 per cent, says LDD. Under Khan it has begun to rise, to 23 per cent in 2018/19, while on sites of ten units or more it has risen further – to 27 per cent, from a low of 21 per cent in the last year of Johnson’s mayoralty. Khan’s policies may have begun to turn the supertanker. 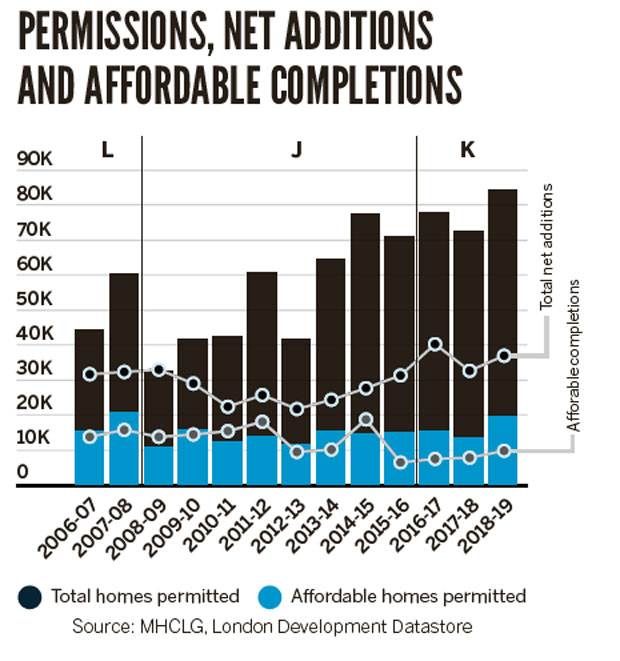