Last week, housing secretary Robert Jenrick resoundingly rejected London Mayor Sadiq Khan’s final draft of his New London Plan, which was submitted to him late last year. In a strongly-worded letter that followed a consideration period extended by eight weeks, Jenrick ordered Khan not to publish the plan, which was examined last year.

In a series of criticisms of the strategy, Jenrick said: “The necessary decisions to bring more land into the planning system have not been taken, the added complexity will reduce appetite for development further and slow down the system, and throughout the plan you have directly contradicted national policy”. Jenrick also said the mayor must start “considering a new plan that will meet the higher level and broader housing needs of London”.

In an annex to the letter, Jenrick set out eight pages of detailed modifications required before the plan would be considered acceptable. Among the key changes he made to Khan's flagship policies is amending his tough line on green belt development to bring it into line with national policy - allowing development via decision-making in "very special circumstances" and its release in local plans where "exceptional circumstances" exist. Meanwhile, a line in policy E4 which states that there should be "no net loss of industrial floorspace capacity" has also been struck out. Both changes were in line with recommendations by the panel of inspectors, published in October, that Khan then rejected two months later.

“Under the GLA Act 1999, the plan has to be approved by the secretary of state before it can be adopted and he has the power to direct changes,” explained Simon Ricketts, partner at planning law firm Town Legal. A spokesman for the mayor accused Jenrick of "trying to run roughshod over the mayor’s efforts to finalise a London Plan" and a "heavy-handed approach". In a subsequent statement this week, the spokesman said the Greater London Authority's "planning experts and legal counsel are currently going through it with a fine-tooth comb”.

“Some of Jenrick’s proposed modifications are not that contentious and bring the plan into line with national policy,” said Mike Kiely, chairman of local authority body the Planning Officers Society (POS). “Other modifications would remove policies which are a top priority for Khan, and he could try to resist them.”

“Jenrick offers Khan the opportunity to put forward alternative changes to address the government’s concerns,” suggested Sarah Bevan, director of planning and development at business lobby group London First. “There's no time limit for the plan’s adoption and with the mayoral elections postponed for a year, Khan has more time to respond. However, London’s businesses want the clarity offered by a new plan as soon as possible.”

Hannah Quarterman, head of planning at law firm Hogan Lovells added: “At the moment, there’s a lack of clarity about the status of this plan, and Jenrick’s proposed modifications. We are not clear what weight to give them in planning applications and appeals.”

The London Forum of Civic and Amenity Societies is concerned that Jenrick’s proposed modifications represent central government imposing policy solutions that do not have any buy-in by Londoners and have not been subject to any scrutiny. “Many of these imposed changes are not informed by an understanding of the needs of London and London residents, and demonstrate a lack of understanding of the likely impact of these policies,” said Michael Bach, the chair of the Forum’s planning committee.

“Jenrick’s key objective is to get a step change in housing delivery in London, which he says in his letter to Khan has been 'deeply disappointing'  in recent years,” said Bevan. But his suggestions may not achieve this, David Lawrence, a partner at multi-disciplinary consultancy CAG, suggested. “Khan’s flagship policy to resist any net loss of industrial land in new development is seen by Jenrick as an impediment to new homes getting built,” said Lawrence, who wrote the GLA’s 2017 study, London Industrial Land Demand. “But redeveloping the remaining industrial sites for housing would produce only small numbers. Large amounts of industrial land have been lost in recent years, and the supply of land for delivery centres and other logistics activities would be threatened."

But Steven Butterworth, a senior director at planning consultancy Lichfields, claimed that the mayor's protection of industrial land is restricting development. He said: “Significant, mainly mixed-use developments are being held up at the moment, because of negotiations  with the GLA."

“Jenrick thinks the housing targets in the London Plan are holding back those boroughs who want higher targets than those in the plan,” said Kiely. The minister directed the mayor in his letter to "work constructively with ambitious London boroughs to encourage them to deliver more housing." Kiely pointed out that there are several boroughs with higher local plan housing targets than those in the London Plan (see map and table below) and are also meeting them. Croydon Council, for example has a five year housing target under the London Plan "of around 6,600 homes, but it has identified sites for over 14,000,” he said.

Butterworth suggested that outer London boroughs "could expect higher housing targets in any new London Plan", which "could be hard for them to achieve”. He added that Khan, despite pledges not to do so, could launch a green belt review across London in order to achieve any new housebuilding target in a future London Plan. 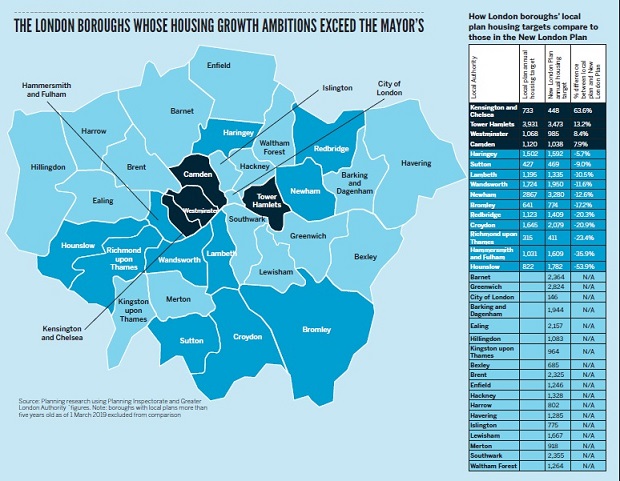