The 2019 housing delivery test results were finally published by the Ministry of Housing, Communities and Local Government (MHCLG) earlier this month. The delivery test aims to measure how effectively each local authority is delivering housing against its requirement. It works by comparing the net additional dwelling figures in each council area over a three-year period up to the previous March 31 against the total number of homes required. The 2019 test covered the 2016/17-2018/19 period.

Under the test, authorities delivering under 95 per cent of their housing requirement have to produce an action plan outlining the causes of their under-delivery. Those scoring under 85 per cent also need to add a 20 per cent buffer to their required five-year housing land supply, instead of the usual five per cent buffer. Meanwhile, the worst performers - those under 45 per cent - are subject to the National Planning Policy Framework's (NPPF's) presumption in favour of sustainable development, which renders their local planning policies for housing out of date and leaves them vulnerable to speculative applications.

However, there are also 20 local authorities among the 75 whose delivery fell between 85 per cent and 45 per cent that now have an increased housing land supply target, moving from a five per cent to a 20 per cent buffer. Of these, Planning has calculated that three are now likely to lose their five-year housing land supply as a result of the additional buffer and therefore become subject to the presumption penalty.

These councils are: the London Borough of Tower Hamlets, Braintree in Essex, and West Somerset (see map below). According to their most recent housing land supply positions, published either in local plans, annual monitoring reports or strategic housing land availability assessments, they had supplies of just over five years with their previous five per cent buffers included. 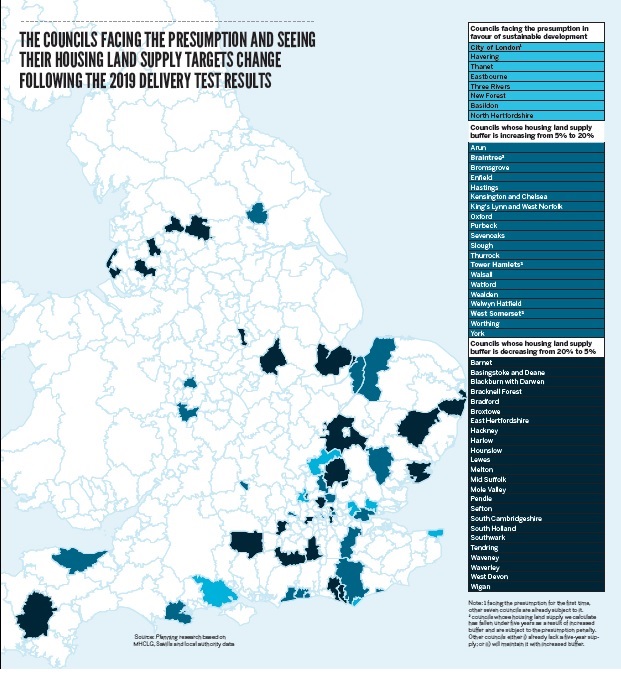 Braintree Council only delivered 67 per cent of its housing need, according to the 2019 test, compared to 93 per cent in 2018. We have calculated that the increased buffer has reduced their already-marginal housing land supply to 4.6 years (see table below). "With a [previous] land supply of 5.15 years, it is going to have difficulties avoiding being subject to the presumption in favour of sustainable development because it will be deemed to have an insufficient land supply," said Sam Metson, a planning partner at consultancy Bidwells, "unless the council finds more sites very quickly." Kathy Carpenter, the council's senior planning officer said the authority has had difficulties finding sufficient sites as the government’s housing need figures have increased. But there are more sites planned to come on stream in later years, she added.

Meanwhile, Planning predicted that West Somerset’s supply would drop from 5.6 to 4.9 years. Mike Rigby is executive member for planning and transportation at Somerset West and Taunton, a new authority that replaced West Somerset and Taunton Deane Borough councils last April. He said work has begun on a new local plan covering the merged council area that the authority aims to adopt by 2021/22. Rigby added that in the current West Somerset local plan area, there are "a number of significant sites" going through the planning application process "with a healthy supply of consents in the pipeline".

Tower Hamlets, whose land supply we calculated as dropping to 4.8 years with the increased buffer, said it did not wish to comment on the issue.

According to Planning's calculations, one authority that will only just maintain its five-year supply with an increased buffer is the Royal Borough of Kensington and Chelsea. The authority adopted a new local plan in September 2019, which, a spokeswoman said, "demonstrates that we have a five year housing land supply", a position "tested rigorously by a planning inspector". However, this was based on the authority having a five per cent buffer - a 20 per cent buffer would reduce the council's supply from 5.7 years to 5.01 years, we estimated.

The spokeswoman said: "We face unique development and planning challenges in Kensington and Chelsea. Around 75 per cent of the borough is within conservation areas and we have about 4,000 listed buildings and structures in our small borough. Bringing forward plans for developments to meet the land buffer is a serious challenge, but we are putting in place plans for new homes."

Any council that has a housing land supply of between five and six years should be looking to reinforce that, advised Jonathan Dixon, director of planning at consultancy Savills. If they fall foul of the housing delivery test and the buffer increases they may need to up their supply or could be prone to challenge via appeals. Some councils with housing delivery problems have supported development on larger sites, said Dixon. "They are an important source of supply but can take a long time to start producing homes. Ideally, councils need to ensure they include a wide range of types and sizes of sites in their land supply," he suggested.

The requirement to include a 20 per cent buffer in the five year land supply comes into effect immediately, said Jo Lee, a senior associate planner at consultancy Stantec. "There will be landowners and developers thinking about appealing on schemes which have been turned down in the areas possibly subject to the presumption in favour of sustainable development," she suggested. Ivan Tennant, an associate planning director at consultancy GL Hearn said: "In those areas, the local plan is no longer relevant and councils have few grounds for refusal if they meet the basic criteria set out in the NPPF."

However, Tennant pointed out that the annual test results can fluctuate significantly from one year to the next, particularly for smaller authorities with lower housing requirements and delivery levels. For example, the City of London, which delivered just 88 homes against a requirement of 275 between 2016/17 and 2018/19, said that next year it will exceed its housing target. A spokesman said the 2019 result does not take into account the 145 homes completed at its Sugar Quay scheme, adding: "Our performance delivery is over 90 per cent when this scheme is recognised in the figures."

The most effective way for councils to address the housing delivery test, is to have an up-to-date local plan, advised Richard Crawley, programme manager at the Local Government Association's Planning Advisory Service. If a council does not have an up-to-date plan, its delivery test requirement is based on the the government’s standard method for assessing housing need which in many cases, particularly in London and the South East, produces a higher figure. "The local plan is a chance for a council to assess what can be delivered and produce a housing target which fits local conditions," he said.

Likewise, Tennant said some local authorities are accelerating the production of their plans to improve their land supply situation. "North Hertfordshire council, which achieved only 44 per cent of its housing requirement, is at quite an advanced stage with the preparation of its local plan and is accelerating its production," he said.

Tandridge Council in Surrey, which scored 50 per cent in the test, only has a land supply of 1.93 years using the standard method, according to Sarah Little, the authority's strategy specialist. However, it is preparing a new local plan that, once adopted, would increase its land supply to 5.86 years, she said. "The plan would set a realistic housing requirement for the district and boost supply by release of some greenfield and green belt sites for housing development," she said.

Another council that would be in the firing line for the presumption would be Bournemouth Council, which delivered only 66 per cent of its housing requirement in the 2019 test down from 84 per cent last year. It has therefore been subject to the 20 per cent buffer penalty in both years. Now part of the new Bournemouth, Christchurch and Poole (BCP) Council established last April, it will aim to meeting the housing targets of the new and wider authority area, according to Kieron Wilson, BCP Council's cabinet member for housing. "We will be looking to scale up our commitment to building new homes on council-owned land," he added.