Last week, the government launched a consultation on its flagship new First Homes policy, to allow first-time buyers to purchase market homes at discounted values. The Ministry of Housing, Communities and Local Government (MHCLG) consultation document states that the discount on First Homes would be 30 per cent and held in perpetuity.

The consultation document states that the government wants to deliver First Homes through developer contributions. It sets out two options – either as a prescribed proportion of all units delivered by new schemes of ten or more homes on "suitable sites", or as a stipulated percentage of section 106 affordable housing through developer contributions.

In terms of the latter option, the consultation document seeks views on the "appropriate level of ambition for First Home delivery", with three different percentages of section 106 contributions floated – 40, 60 and 80 per cent. However, the consultation paper stresses that the three threshold options shown do not represent "any government intentions at this stage". An MHCLG spokesman told Planning that First Homes would not be a like-for-like replacement for other forms of affordable home ownership, such as shared ownership, but emphasised that the means of delivering the programme had yet to be decided.

Figures compiled by Planning show that if First Homes are added to the existing mix of tenures under the target percentages proposed in the consultation it could lead to a significant reduction in the provision of other tenures funded by developer contributions (see above). For example, 46 per cent of all affordable units completed in 2018-19 were affordable rent units, but this proportion could fall to 27 per cent if a 40 per cent requirement for First Homes were to be introduced on top of all other tenures and the percentages of the remaining tenures delivered remained constant. Likewise, the proportion of social rent units completed would fall in such a scenario from 13 to 8 per cent.

Practitioners warned that any use of developer contributions to secure First Homes would squeeze out other forms of affordable housing. Sarah Platts, chair of local authority body the Planning Officers Society, said: "The risk is that such a move would reduce the number of truly affordable homes being built for lower-income households. Delivering on social housing commitments has to be a priority." Grant Leggett, director and head of the London office at consultancy Boyer, said: "It’s inevitable that other types of affordable homes would get pushed out."

Matthew Good, director at planning consultancy Pegasus Group, said there could be a "tension" in the proposals between the government’s aim for more home ownership and councils’ ambitions to maximise social rent units. According to David Bainbridge, planning director at consultancy Savills, many councils are "suspicious" of whether discounted market sales are "really affordable". "Many councils don’t like the tenure due to lack of evidence on need as it’s new," he said. 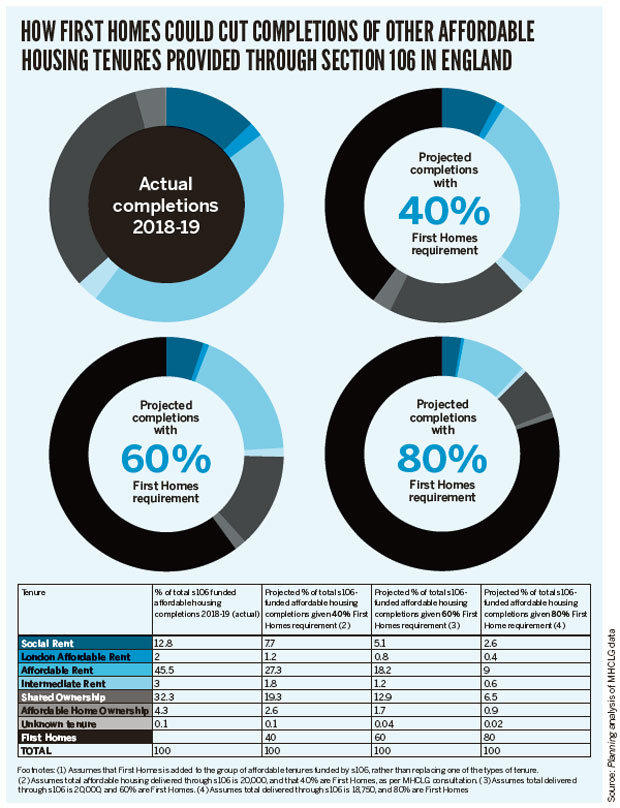