‘‘Local parties for local issues", was the platform on which 17 Residents for Guildford and Villages (R4GV) candidates fought May 2019’s local elections. It was a message that swayed enough voters to elect 15 R4GV councillors, revolutionising the political scene in the former Tory stronghold.

Planning issues were the principal fuel for the insurgency. "I had never not voted Tory until I voted for myself," admits R4GV leader Joss Bigmore. "The Conservatives have an aggressive housebuilding policy and it is unpopular. It is very difficult for Conservative councillors to go against their national party. Are local politicians who want to go into central government really fighting for the borough, or just self-interested? I think that was people’s concern."

The Surrey town of Guildford was not the only area where voters chose to cast off traditional party loyalty in 2019. Local political parties formed by residents’ groups made headway in a number of districts across England (see map, below), and in many of those areas housing growth mandated by the local plan process was the hot-button topic.

In rural Essex, Residents for Uttlesford (R4U), a party formed in opposition to the large-scale development envisaged in the emerging local plan, was able to seize outright control of the council from the Conservatives. In other authorities, including the Surrey districts of Waverley and Elmbridge, residents’ groups ousted the Tories by forming administrations in alliance with the Liberal Democrats.

After the elections in Guildford, Bigmore was narrowly defeated in a council leadership contest, and R4GV now lends its support to a Liberal Democratled administration. He and councillor colleague John Rigg occupy two of the authority’s ten executive posts, and R4GV has five seats on the 15-strong planning committee. R4GV campaigned for a brownfield-first approach, arguing that regenerationled development in the town centre should be prioritised over the release of large green belt sites.

In spite of the group’s opposition to green belt development, Rigg, a property industry veteran who was formerly head of international investment at consultancy Savills, bristles at the suggestion that it is a "nimby" organisation. "There is a fundamental error in the planning system," he argues. "Councils put brownfield sites in the box labelled ‘too difficult’ and five years later when they are reviewing their plan, the brownfield sites haven’t moved on, and the green belt is under scrutiny again. We are progrowth and pro-brownfield."

A greater desire to control housing growth is not a concern solely of councils and communities in the wider South East. "We are not so stupid as to think we can survive without development and growth, but it has to be the right kind of growth that meets the needs of our communities, and it has to be supported by infrastructure," says Peter Lundgren, one of the 22 independent members elected to North Kesteven District Council in Lincolnshire in May, which is run by a minority Tory administration.

Lundgren, the council’s opposition deputy leader, is a member of the Central Lincolnshire Joint Strategic Local Plan Committee, which oversees the joint local plan for North Kesteven and two neighbouring authorities. He believes that the strong independent presence on the planning committee is helping to hold developers to account. "Because applications can no longer always get through on the basis of a one-party bloc vote, we are finding the officers are working better with developers to get tangible benefits delivered for the community. It is no longer acceptable for a developer to come in, build a few boxes, pack up and leave a social mess behind them. If developers behave irresponsibly in a community they shouldn’t be surprised when the community starts electing representatives who will take them on."

Back in Surrey, Elmbridge Borough Council was another authority that saw a Conservative administration fall in May’s local elections. It was ousted by a coalition between the Liberal Democrats and a collection of residents’ associations, which hold the leadership and the planning brief in cabinet.

Officers are preparing Elmbridge’s local plan, which may include some unpopular green belt development. Planning portfolio holder Karen Randolph, of the Thames Ditton and Weston Green Residents’ Association, says it is not yet clear whether they will be able to provide the required housing numbers without going into the green belt. "If they can, that will probably be more acceptable to council members," she says. "We don’t want to be overwhelmed by excessive building, but the pressures being applied by the government, particularly under the standard methodology for calculating housing need, are so ridiculous as to make meeting them almost impossible."

Big increases in housing need calculations have been a crucial factor in the burgeoning support for residents’ groups, suggests Catriona Riddell, strategic planning specialist at the Planning Officers Society, which represents public sector planners. "Since the National Planning Policy Framework (NPPF) was introduced, far more greenfield sites and new settlements are being considered, which puts councils into battle with local communities. The expansion of social media over the last ten years and the ability to crowdfund has also had a big impact. It creates a greater ability to galvanise anti-development support."

However, she foresees that many such groups will run into difficulties when trying to navigate the complex competing local and national interests that drive planning. "You get a lot of people who are used to standing outside the tent throwing very big stones now standing inside the tent and having to take the hit," she says.

In some cases, residents’ groups are coming to realise that having even what they consider to be a flawed plan is better than having none at all, because it protects them from developers’ speculative applications. In Uttlesford, the local plan inspector wrote to the new administration to ask whether they would like to proceed with a plan that they had previously criticised. The response from the new administration was that they would continue with the existing plan, and an examination is now under way.

Sam Metson, a partner at consultancy Bidwells’ Cambridge office, says: "The R4U group found themselves in a difficult position. If they withdrew the plan from examination, or said they no longer supported it, they would have to prepare a new local plan, which means they would have had to go through that tortuous process again. They would also be hit by the new NPPF’s standard housing methodology, so it is probably easier for them to say: ‘This is not our plan and we don’t like it but we are stuck with it.’"

Council leader John Lodge is unwilling to comment on the local plan because of the ongoing examination, but argues that R4U can reform the district’s approach to meeting housing need. "We know we have to build new communities," he says. "The number one issue is that we are not going to let developers build poor quality developments. We are going to take control with the use of locally-led development corporations [LLDCs] so the power is back in our hands. There is a competition for LLDC funding, and we may be one of the earliest councils to get an LLDC approved."

In Guildford, R4GV also ended up stuck with the existing local plan, by virtue of it having been adopted a week before the election. In December, the plan survived a High Court legal challenge from an anti-green belt development campaigner plus two parish councils. Bigmore admits that R4GV councillors may have to focus on making sure developments that they have not been successful in stopping are executed sustainably and to high standards, while pushing forward plans to regenerate the town centre so that fewer green belt releases are required. Rigg, who holds the executive brief for major projects, hopes to invite submissions from town centre masterplanners in early 2020.

Bigmore believes that if more R4GV candidates had stood for election, then the group might have taken control of the council. "Hopefully we can now broaden and solidify our base and make it usual for people to vote for resident candidates," he says.

"This will be the direction of travel for a lot of councils," says Riddell. "Plan-making will be more about the impact on local communities than if they were made on a party-political basis, which is a positive thing, but it will also be harder to get big decisions on growth through the door." 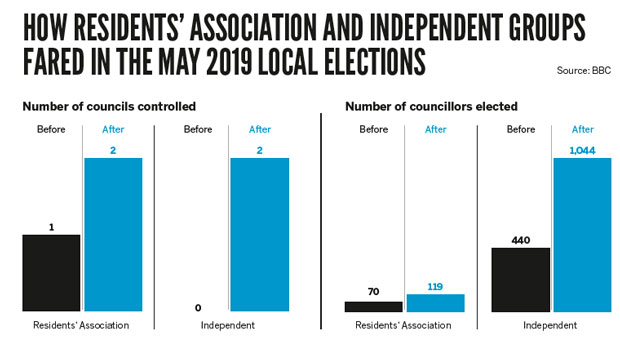 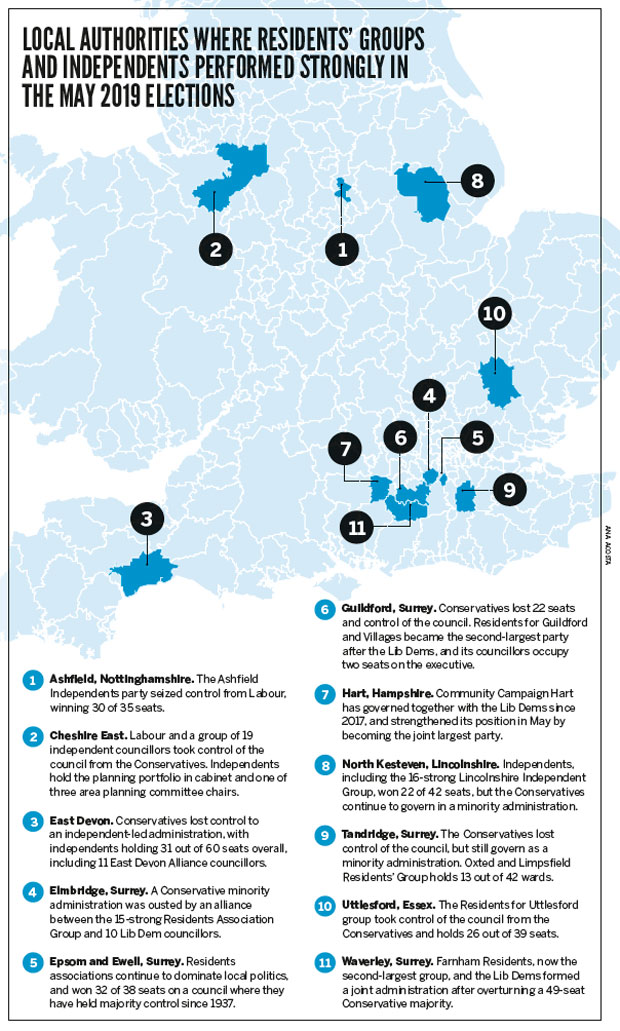