Among the 25 biggest firms that have provided information to both this year’s and last year’s survey, female planners employed at director level rose year on year from 90 to 103, or by 14 per cent The proportion of all planning directors in those firms that are female has also increased, from 20 per cent to 23 per cent.

Alison Mackay, co-founder of umbrella body Women in Planning, is heartened by the increase in female directors shown by our survey, although she adds that the organisation’s own research continues to reveal a shortfall in representation at board level. Co-founder Charlotte Morphet adds: "While the increase in women in the top 25 companies is welcome, the profession still needs to invest in increasing the number of women in leadership roles to ensure that it better reflects the population it serves."

Among the 148 individual companies that responded to the Planning Consultancy Market Report, Emery Planning has the highest proportion of female chartered planners (see table, below) at 56 per cent, while 38 per cent of its directors are female. Director Caroline Payne says the firm does not have "specific policies" on gender diversity. Rather, she says, it is simply part of the company’s culture. "It’s a thread that runs through the company – it’s an ethos."

Payne also believes that the company’s attitude towards flexible working is key to its ability to retain women planners. "I worked full time until I had my first child, then three days a week until both my children were at school. Now I work four days over five," she says. "It’s a case of making it work. We recognise that the business needs are the priority, but because we have the flexibility, we will make the arrangements to make sure the job is done." Only two of Emery Planning’s ten female consultants work a traditional nine to five, five days a week, she adds.

The firm with the second-highest proportion of female chartered planners is Firstplan, where 53 per cent are women, as are 40 per cent of its directors. Like Emery Planning, this appears to be a result of the company’s culture rather than any formal approach. "It hasn’t been a policy of the company to get a gender balance," says director Michael Woolner. "It’s just sort of happened subconsciously. The key criterion for staff is talent." 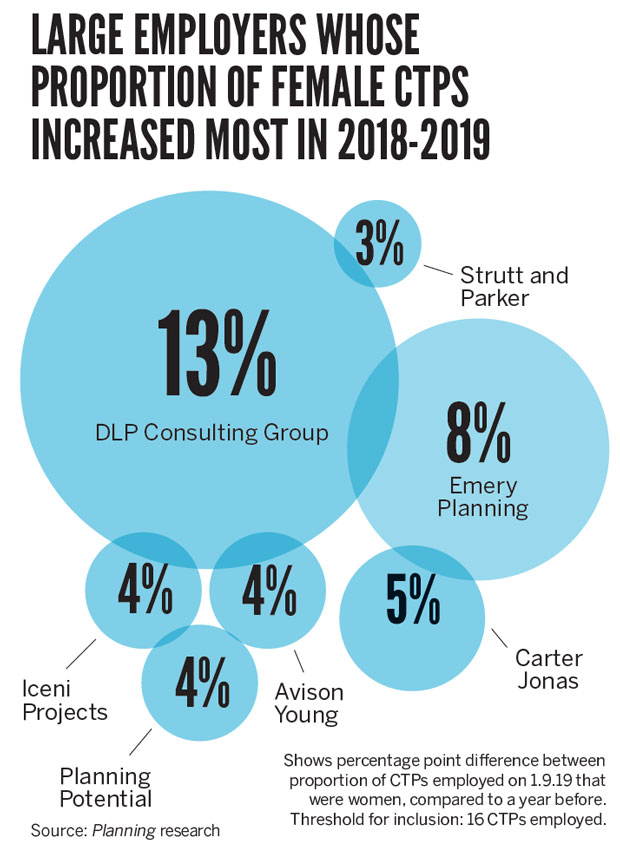 It may not be deliberate, but Woolner believes that having a good gender balance does help create a more "harmonious" and family-friendly working environment. He dismisses the argument, once common among some business leaders, that women employees taking maternity leave causes disruption. Rather, he says, when associate - or director-level female staff take maternity leave, it provides an opportunity for more junior members of the team to step up and gain experience. Woolner also believes that, as a relatively small company, Firstplan is able be flexible in terms of employees’ working hours in a way that may not be possible at large corporates.

At 51 per cent, multi-disciplinary firm Atkins boasts the third-highest proportion of female planners among the 25 consultancies we analysed. At the time that the firm responded to the survey, one of the firm’s four planning directors was female, although a second has since been appointed.

According to Joanne Farrar, practice manager for Atkins’ planning, economics and heritage team, the company has diversity and inclusion policies that apply across its "recruitment, development and advancement activities". She says that, for a long time, the firm had been successful at achieving gender parity up to principal level, but then struggled with more senior grades, with women returning from maternity leave feeling they had neither the time nor the energy to seek promotion.

"So, we worked hard to ensure people are still able to pursue those goals, even if they are working a three- or four-day week," says Farrar. "Because we are now quite successful at getting women to associate and director levels, they’re good role models." Farrar adds that she encourages her team to think about flexible ways of working in order to find a better work-life balance. This, she says, is essential if men are to be encouraged to take a greater role in childcare, which in turn should allow women to spend more time on their careers. 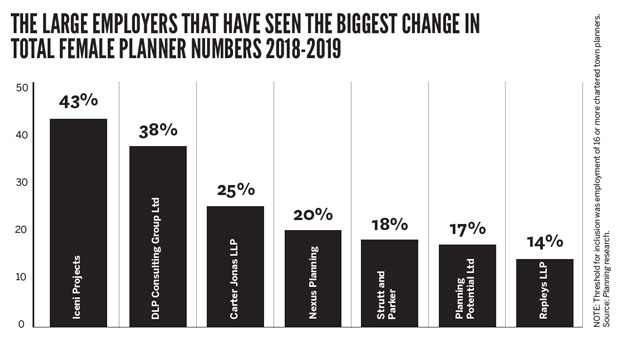 In first place for the highest proportion of female planner directors is LUC, with five out of ten. It is also fourth equal for the proportion of female planners overall, which also stands at 50 per cent. Philip Smith, head of planning at the company, attributes the gender parity to its formal "agile working policy", which he says is made available to potential recruits.

The policy sets out various options for employees, including part-time hours, compressed hours, flexible start and finish times, working remotely and additional unpaid leave. It adds that other options will be considered on a case-by-case basis. "We recruit with an open conversation about flexibility from day one," says Smith. "[A lack of flexibility] is often a huge barrier to women changing jobs and exacerbates the gender pay gap. We promote flexibility for everyone and not just for family reasons. You get a really good range of applicants if you offer that."

Arup takes fourth equal place in terms of its proportion of female town planners, at 50 per cent, and third place for female directors, at 41 per cent. Claire Beedle, technical director of town planning at the consultancy, says the company realised some time ago that diversity was essential to ensure that it designed places to work for the whole of society. "The danger if you’ve got too big a cohort of men is that they’re thinking about things on their terms rather those of wider society," she says.

Beedle adds that Arup has set up working groups and open forums on various aspects of diversity, including gender, and that it works with schools and universities to encourage people to consider a career in the built environment. She says a "great deal of thought" goes into the text of job adverts, adding that the company – like the other leading firms in the survey – offers flexible working. She adds: "There is a real shortage of skills, so if you don’t reach out to every part of society, you’re already reducing the number of skilled people available to you."

The firm that improved most year-on-year in terms of female representation was Iceni Projects, whose 20 women chartered planners form 43 per cent of its total. It increased the number by six, a rise of 43 per cent. Director Ian Anderson says the firm has made a "focused attempt to employ women, particularly those returning to work after a career break". He says: "We have made a conscious decision to create a welcoming, flexible, considerate home for all people, and by definition, 50 per cent of those benefiting from this approach are women."

Rosalind Graham, a planning associate at the firm, says she has had two career breaks to have children and wanted to find a company that encouraged women returning to work and enabled them to rebuild their careers. "Iceni offered real flexibility, which allows me to make the school runs and be around for my children. The juggle of work-life balance is the holy grail that every working woman aspires to, and if a company can help you achieve that, it’s something to hold on to." 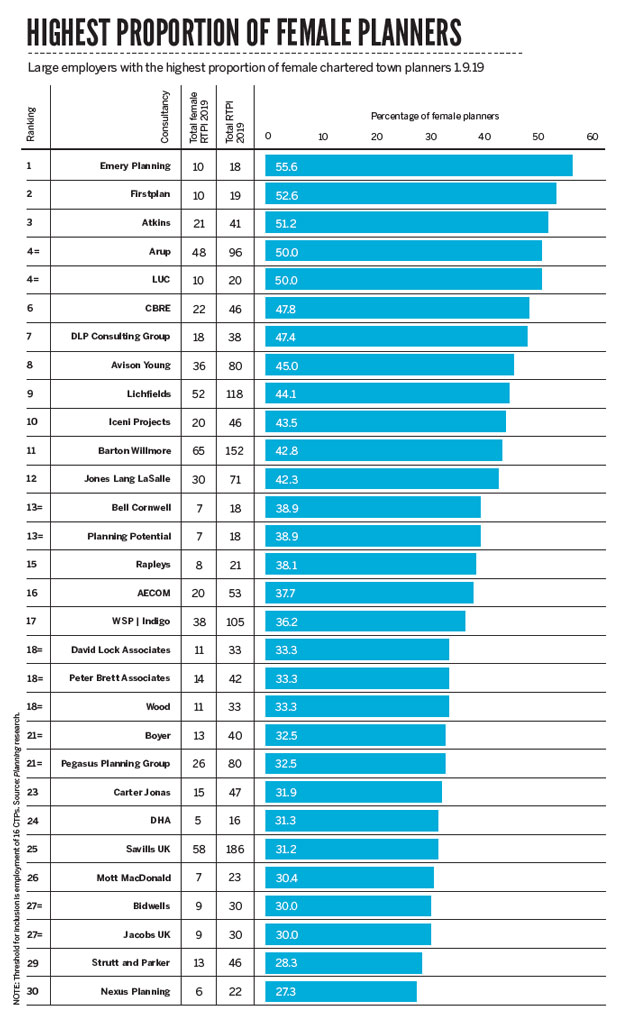 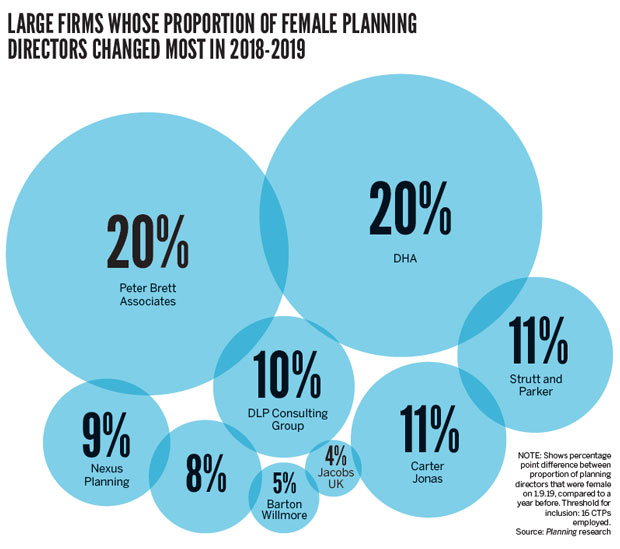