London mayor Sadiq Khan accepted before Christmas that housing targets in the new draft London Plan will be significantly lower than he originally proposed. However, the figures as revised by the plan's inspectors remain much higher for many boroughs than under the existing London Plan, which has significant ramifications for their five year housing land supplies.

While the existing plan calls for 42,000 homes a year to be built, and Khan had proposed raising this to 65,000, he accepted the inspectors’ recommendation for a target of just over 52,000. This number would leave 22 boroughs facing an increase in their annual housing requirement, which, according to Matt Richards, planning director at consultancy Savills, will apply to boroughs from the minute the plan is adopted.

An analysis conducted by Savills exclusively for Planning shows that if the revised figures are formally adopted, it would leave very nearly half of all London boroughs without a valid five year supply of sites for housing. This would mean they are open to speculative applications under the National Planning Policy Framework's (NPPF's) presumption in favour of sustainable development.

Under the existing London Plan housing targets, just four boroughs are deemed by Savills to be without a five year supply – Ealing, Harrow, Havering and Newham. Under the new revised targets, Savills forecasts that this number would quadruple. Three of the four would continue to be unable to demonstrate a five year supply, with just Harrow moving above the threshold. These three would then be joined by 13 further boroughs, leaving 16 of London's 33 local planning authorities without the required land supply (see map below and table). 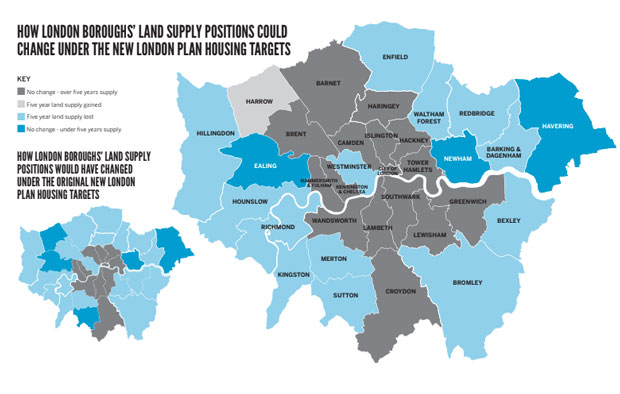 Five boroughs – Hillingdon, Merton, Hounslow, Barking and Dagenham and Richmond – would see their housing target double under the new figures, and are unsurprisingly among those which would lose their five-year supply. Overwhelmingly, it is outer London boroughs that would be most affected by the proposed change. Of the 13 boroughs predicted to lose their five-year supply, just one – Westminster – is from inner London. All of the outer London boroughs predicted to fail on five-year supply are constrained by green belt, with the likes of Hillingdon and Enfield covering areas that are more than 90 per cent green belt.

It may be little consolation to these authorities that the original proposal from Khan was much more ambitious. According to Savills, Khan’s original plan would have seen 22 boroughs, or two-thirds, without a five-year land supply (see map below). Barnet, Brent, Greenwich, Haringey, Harrow and Lewisham would all have lost their five-year supply under the plans, but are now predicted to retain theirs.

Richards said that even the revised housing numbers would present a significant challenge to many outer London authorities, particularly those with big areas of green belt. He said: "These are significant targets, especially given green belt constraints and the mayors stated attitude to that. It’s going to require a step change in local decision-making around permitting higher density development in particular locations."

Richards said the targets, if adopted, would present opportunities for developers to benefit from the NPPF's presumption penalty. Practically, he said, authorities should consider whether their land supply position could be improved by permitting any individual large schemes, and whether they need to issue a call for sites to refresh their supply of land allocated for new homes. "I would be starting the process of reviewing your allocations now," he said. "I can’t see the requirement going down any further from where it is now."

Asked about the figures, a spokesman for Barking and Dagenham Council said the borough was in the final stages of preparing a new local plan which "accommodates the revised London Plan housing targets", though it said delivery might be back-loaded toward later years of the plan. The spokesman said: "We are one of the capital’s most active house builders, and we have a huge pipeline of new private homes being delivered here, so we are determined to meet these targets."

Steve Curran, the leader of Hounslow Council said: "Hounslow has identified sufficient capacities in the borough to meet the draft London targets of 1,782 homes per annum and actually exceed this number to meet its objectively assessed need of 1,911 homes per annum over the plan period." He added that the borough has pledged to "secure 5,000 new homes by 2022".

A spokeswoman for Richmond Council said: "The council undertakes regular monitoring and revisits the housing land supply and trajectory, using the latest information from developers and assessing sites for their deliverability to accord with NPPF and Planning Practice Guidance. It is envisaged this will be undertaken later in the year, particularly in light of any new housing target." She added that the council aims to begin work on a new local plan with the first consultation anticipated in the spring.

If approved by the secretary of state, who is currently considering the document, Khan has promised that the final London Plan will be placed before the London Assembly on 6 February 2020, for publication in March 2020.