In the dying days of 2019, London mayor Sadiq Khan made clear that he will not fight the significant downgrade to the draft New London Plan’s housing target recommended by a panel of inspectors. The panel in October told the mayor to slash the target by a fifth, from nearly 65,000 homes per year to just over 52,000 – though this is still a long way above the existing London Plan figure of 42,000 homes per year. Khan’s acceptance of the recommendation came despite his decision to oppose some of the inspectors' other key recommendations, such as the call for him to review London’s green belt.

The inspectors concluded that the plan’s proposed housing targets rested on the development of small sites at a rate that is not "realistically achievable" and were therefore "not justified". The document had proposed that housing delivery on small sites - almost two-fifths of the total target - should increase by 250 per cent on average in outer London boroughs. However, Khan’s decision halves the expected contribution of small sites overall, from providing over 24,000 homes per year to just under 12,000.

The London Borough of Ealing is one of the boroughs whose targets is set to drop the most following the London Plan changes (see bar chart below). Welcoming the revisions, Steve Barton, the council's strategic planning manager, said the original target - more than twice its current level would have left the borough subject to the housing delivery test's most severe penalty, the National Planning Policy Framework's presumption in favour of sustainable development, leading to "planning by appeal". 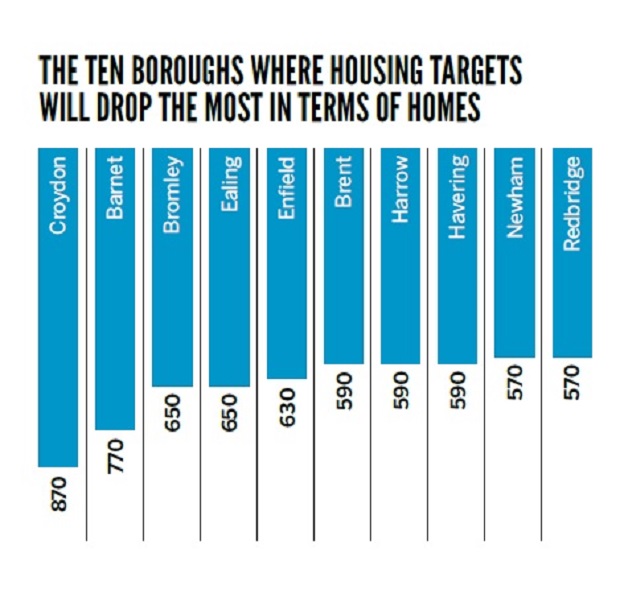 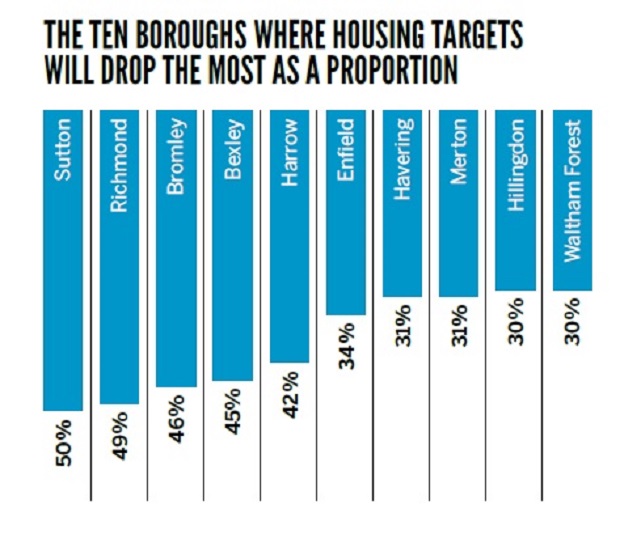 In his letter referring the latest version of the plan to housing secretary Robert Jenrick, Khan said the reduced target still represented "a step-change" compared to current numbers and said he accepted it in order "to get the new plan adopted as soon as possible". Ealing’s Barton said: "It is much more realistic and means we now have an overall housing supply target that remains ambitious and challenging but which we believe we will be able to deliver." Mike Kiely, chairman of local authority body the Planning Officers’ Society (POS), said: "The new numbers will be a stretch but will not be completely unachievable. They actually present an opportunity to plan properly for the regeneration of outer London town centres."

Even housebuilders have not objected to the reduction in ambition. Andrew Whitaker, planning director at lobby group the Home Builders’ Federation, said: "We were arguing those numbers were not achievable anyway." Likewise, Barton said the change will not reduce the number of homes built as the previous numbers were based on a flawed methodology which didn’t reflect constraints restricting the capacity of housebuilders, such as access to labour and materials and market absorption rates.

But the potential impact of London not being able to meet its own housing needs has prompted concerns among developers. "The change in direction will plainly have far reaching implications on London’s unmet housing need," said Tom Davies, a planner at consultancy Lichfields. "In the short term, this could further exacerbate issues regarding the affordability and suitability of London’s existing stock, especially in the outer boroughs."

There is also the lack of any mechanism by which authorities in the wider south east surrounding London can be required to take up this unmet need since the duty to co-operate does not apply to the London Plan. "There are no structures for co-operation and joint working," said Kiely.

Whitaker said this should be addressed. "The mayor had argued London could consume its own smoke – deliver the required homes without overspill or green belt review," he said. "It now seems the mayor has accepted he can’t deliver the homes but is still refusing to have a wider conversation with the home counties and regarding the green belt." Whitaker said the HBF would be arguing in south east local plan enquiries that because of this, authorities should allow extra housing to accommodate London's unmet need, but he conceded that it would be a difficult point to push given the lack of formal arrangements.

The question now is how Jenrick, who has responsibility for approving the plan, will respond. Davies said the plan’s failure to meet need meant Jenrick could demand an early review of the plan or place a holding direction on it. However, many expect he will be cautious of sparking a significant fight with the mayor on the issue of housing numbers. Barton, in his capacity as the chair of POS’s spatial planning network, said he expected that Jenrick may conclude "that a flawed London Plan is better than no plan at all", adding: "Politics will prevail."