The number of 500 home-plus schemes recorded by our survey rose this year, as did the proportion of affordable units that they contain Despite uncertainty over Brexit and the economic outlook for the UK, this year’s Big Permissions list shows that a healthy pipeline of major schemes were granted planning consent this year across the housing, commercial and retail sectors. According to our definition (see below), well over 100 big permissions were granted during 2019.

Our list records consents issued across the UK over the past 12 months – between 17 November 2018 and 15 November 2019. It includes permissions for housing schemes of 500 units or more, retail and leisure schemes of 5,000 square metres or more and commercial and industrial schemes of 20,000 square metres or more. We have sourced this material from contacts across the sector, appeals data from Planning’s sister service COMPASS and from coverage such schemes have received in our pages and our PlanningResource website.

OVERALL NUMBERS OF PERMISSIONS AND DEVELOPMENT

Comparing the results with those from 2018, the number of big permissions for housing has increased from 54 to 71. This rise chimes with the experience of some practitioners to whom Planning has spoken. For example, David Jackson, head of planning at consultancy Savills, pointed to research his company carried out that found a similar trend of rising permissions for larger schemes from 2016 to 2018. Similarly, Trevor Goode, head of planning at law firm Ashurst, said his firm had noticed a move towards local authorities granting permissions for larger schemes. "This is flowing from the drive to bring forward garden villages, as well as from green belt releases," he said. "For many authorities, the development of larger sites provides an easier way to hit housing targets, whilst releasing the pressure on smaller, more sensitive sites."

The largest housing permission granted during the year was the final outline approval for the Waterbeach new settlement in Cambridgeshire, where South Cambridgeshire District Council resolved to grant permission for 6,500 homes in May, with final approval being issued in September. Other new settlements and urban extensions being granted during the year included the Welborne Garden Village scheme in Fareham (6,000 homes); the Attleborough urban extension in Norfolk (4,000) and the Northern Arc urban extension in Burgess Hill (3,040). Major housing consents in London included the Land at Beam Park scheme in Dagenham (3,000) and the Poplar Gas Works project in Tower Hamlets (2,800).

INCREASE IN PROPORTION OF AFFORDABLE HOUSING

The average proportion of affordable housing secured from big permissions has seen a noticeable rise, from 23 per cent in 2018 to 28 per cent in 2019.

Practitioners agreed this was in line with their experience. Roy Pinnock, partner at law firm Dentons, said changes to the viability policy in planning practice guidance had clarified the position that land value "should adjust to properly tested policies". Pinnock added that London mayor Sadiq Khan’s "nudge approach" to affordable housing, whereby schemes that offer 35 per cent affordable housing are spared from late stage reviews investigating whether they could supply more, together with a "consistently muscular approach to detailed section 106 drafting", had "significantly increased the headline level of affordable housing in consented schemes".

Goode agreed that the mayor’s approach was "taking effect and being applied in a more consistent manner". He added: "Developers are realising that it is much more straightforward to offer 35 per cent affordable housing and to offset the viability effects of this by increasing density, than to resist it. This enables developers to avoid the financial uncertainty of a late stage viability review."

Grant Leggett, director at consultancy Boyer Planning, said that, in his experience of schemes in London, many developers "are feeling somewhat forced to provide more affordable housing", adding: "The health warning with this is how many of these schemes are viable and can be implemented."

Goode reported that, outside London, changes to the National Planning Policy Framework made in 2018 mean there is "an increased expectation that schemes will deliver affordable housing".

"The requirement at paragraph 34 that plans set out contributions expected from development, including affordable housing, and that this is viability tested at the outset, is resulting in a much stronger local plan policies basis for securing increased affordable housing," he said. "When coupled with paragraph 57, which essentially means that where up-to-date policies set out expected developer contributions, viability assessments are the exception rather than the norm, it is becoming much more difficult for developers to justify an affordable housing offer which does not comply with planning policy."

Jackson added that a general improvement in market conditions, increased funding available from government agency Homes England to underpin infrastructure costs and greater activity generally by housing associations could be explaining an increase in the average percentages.

Whereas many of the big permissions in the capital involve major regeneration schemes, such as The Margarine Works in Southall or the Canada Water Masterplan in Southwark, in the East of England new settlements, urban extensions and other greenfield developments are a key component of the big permissions. Besides Waterbeach and Attleborough, such projects include the Wellcome Trust’s campus expansion in South Cambridgeshire, the Heybridge Garden suburb extension in Maldon, the Loves Farm new settlement in St Neots and the Gilden Park North scheme in Harlow.

Elsewhere, the largest housing schemes to receive permission in northern England were York Central and the Lincolnshire Lakes project in North Lincolnshire (both due to provide 2,500 homes). The largest housing scheme to obtain consent in the Midlands was the Norwood Farm scheme in South Northamptonshire (1,900). The largest projects to receive planning permission in Scotland were the Halbreath scheme in Fife (1,400) and the Turnhouse Road development in Edinburgh (1,400).

Southwark’s five permissions all included housing. The biggest was the Canada Water Masterplan. Proposed by British Land, under a development agreement with Southwark Council, this features 2,000 homes along with a new town centre including retail, offices, workspaces and other mixed uses. The scheme covers a 21-hectare area and will be developed over a 15-year period.

Tower Hamlets’ big permissions in 2019 included the Poplar Gas Works mixed-use scheme, including the provision of 2,800 homes, while the big permissions consented during the year in Leeds included developer Taylor Wimpey’s Wetherby housing scheme, which is due to provide 800 homes and supporting infrastructure east of the town. 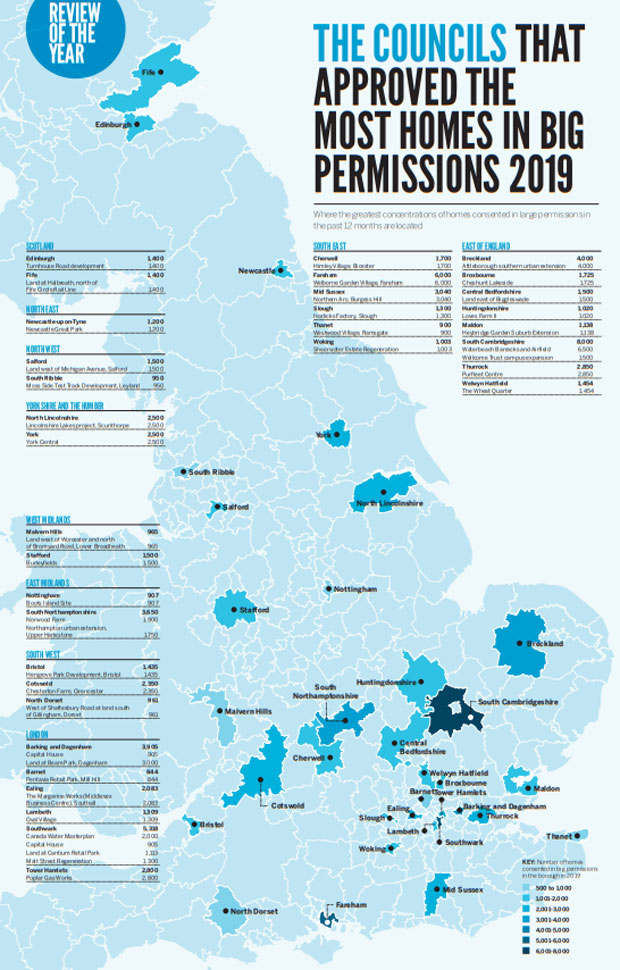