The National Planning Policy Framework (NPPF) states that all authorities have to demonstrate they have allocated enough deliverable sites to provide for five years’ worth of housebuilding in their borough, plus a five per cent buffer. Under the housing delivery test, councils where the output of homes falls below 85 per cent of their requirement over a three-year period must allocate an additional 20 per cent of plots – effectively another year’s housing supply.

Planning's analysis suggests that 19 authorities - about one in 20 - will this year move from applying a five per cent to a 20 per cent buffer. Where this leaves them unable to show their required five-year land supply, they become subject to the NPPF's presumption in favour of sustainabe development when considering speculative applications on non-allocated sites.

Overall, Planning forecasts that 83 authorities will be forced to apply a 20 per cent buffer. Authorities in high demand areas, with out of date local plans, and have a constrained land supply, are most likely to be penalised, according to Harry Bennett, a planner at consultancy Lichfields. The 19 expected to increase their land supply buffers include metropolitan green belt authorities such as Enfield, Welwyn Hatfield, Sevenoaks and Slough. All but four are in either London, the South East or East of England. Bennett said: "The combination of an unconstrained housing requirement to assess authorities’ delivery [against] with a constrained supply would appear to result in many authorities falling below the 85% [delivery test] threshold." 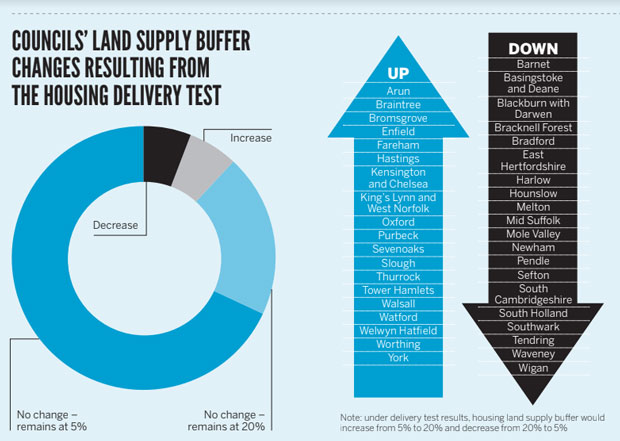 Tom Baker, an associate planning director at consultancy Savills, said his firm’s analysis predicted that, of the authorities to move to a 20 per cent buffer, just 11 would lose their five-year land supply when the official delivery test results are published. However, where this does happen, it will apply immediately to decision-making, making authorities more vulnerable on appeal. "Nationally, this is not a big shift," said Baker, whose firm was not disclosing which councils they are, "but the implications for any authorities with live appeals are serious. They will want to respond immediately."

However, it is not clear what immediate action authorities will take. Colin Haigh, head of planning at Welwyn Hatfield Borough Council, said his authority would focus on getting its local plan, currently under examination, adopted, and would "continue to resist development on green belt land until the local plan examination has considered the options for each settlement." He said responding to the delivery test was "definitely a challenge" as it came in addition to dealing with the local plan examination, and statutory responsibilities such as brownfield registers, self-build registers, and delivery test action plans.

Where previously, authorities may have been tempted to simply bring forward sites in their long-term local plan development pipeline to their five-year supply, the 2018 NPPF's tighter definition of "deliverable" - with a higher bar for the evidence required - will make this all but impossible, say practitioners. Shelly Rouse, a peer at the Local Government Association's Planning Advisory Service, as well as a principal planner at Canterbury City Council, said: "If you’re trying to dip back in to sites that previously didn’t make the grade and then re-assess them, it raises the question of how you provide the necessary clear evidence of deliverability." The result, she predicted, would be a rash of appeals. Promoters of the sites not selected "will challenge it and speculative promoters will say the assessment isn’t robust," she said.

Kathy Carpenter, a senior planner at Braintree District Council, which is among the 19 likely to see the 20 per cent buffer applied after its housing requirement increased sharply this year, said proving the deliverability of sites was already very difficult under the new NPPF definition. "Having an additional 20 per cent buffer will make an already difficult position even more impossible for us," she said.

Granting permissions on speculative or windfall sites is another potential way to build up a demonstrable land supply, as the NPPF states that sites with full permission should be considered deliverable unless there is clear evidence otherwise. Sam Metson, a planning partner at consultancy Bidwells, said: "If an authority wants to get to a position of having a land supply, it’s probably a matter of boosting it by giving a few permissions."

However, Braintree’s Carpenter said it had tried this, but even then found developers challenging the deliverability of permitted sites. "It makes members and the public ask what’s the point of granting permissions when we’re then told they don’t count in our five-year supply. It’s a nightmare."

Lichfield’s Bennett said authorities that want to avoid these problems should be "constantly scanning, being proactive and taking account of known completions and expected supply throughout the year" in order that planning decisions are made with likely delivery test result in mind.