The Planning Consultancy Survey 2019 features consultants' predictions of the market sectors they expect to show the most, and least growth, in fee income in 2019/20.

Advice on education facilities was tipped to show the most growth, at 5.9 per cent, while commercial and industrial and energy schemes were joint second-highest at 5.6 per cent.

The four sectors expected to show the next-highest rates of growth, ranging from 5.4 per cent to 4.6 per cent, are: district-wide studies and strategies; heritage conservation; greenfield housing; and brownfield housing.

Planning for education facilities has received growing attention from the government this year.

In March, an amendment to the government's Planning Practice Guidance (PPG) made it plain for the first time in planning that education developments should be regarded as infrastructure for the purposes of developer contributions.

Last month, the government announced it would trial a scheme offering loans to developers to help them pay "up front" for new schools required to support housing growth, claiming that, along with providing new education facilities, the move will help "boost the viability of new housing estates".

In terms of energy, while firms reported slower growth in this area in recent years, they now regard it as one of the fast-growing sectors.

Respondents estimated that fee income from the energy sector had increased by seven per cent in 2018/19, making it the fastest-growing sector in the past year, while such work would increase by a further six per cent in the year ahead.

The push to decarbonise the UK’s energy infrastructure was also cited as a factor by consultants.

Commentators said the rise of online retail, and the resulting growth of the logistics sector, explained the positive expectations about commercial and industrial facilities.

Fee income from commercial and industrial is predicted to increase by six per cent in the year ahead, according to respondents.

"The demand for logistics will continue as our lives change and demand increases for instant access to goods," said Sitch. 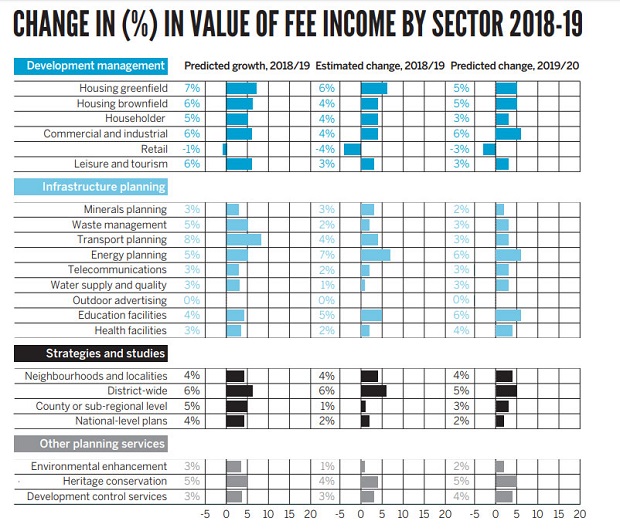