Earlier this year, the first council tenants started moving into their new homes at Barton Park on the edge of Oxford. The 11 families joined private residents who have been living on the estate for two years.

The 885-home community is being developed by a partnership between Oxford City Council and developer Grosvenor. Plans for the scheme include 40 per cent social housing, along with a number of design features aimed at achieving biodiversity net gain, as well as promoting healthy lifestyles.

The origins of the development date back to 2009, when the council turned its attention to the site in a bid to deliver much-needed additional housing for the city. The site was being used to grow crops in 2009.

"Because of a shortage of development land in our ownership, this was our one decent chance at bringing forward a sizable site for housing," says Jane Winfield, head of regeneration and major projects at Oxford City Council. 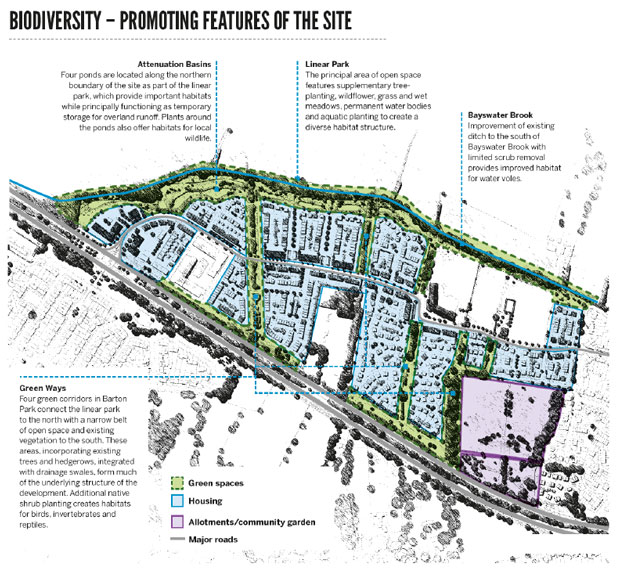 However, in the immediate wake of the global financial crisis, the council struggled to find developers that were willing to get involved under a traditional procurement model, in which they would act as development manager on behalf of the authority. Instead, the council was advised to opt for a joint venture model, under which profits would be split with a private sector partner.

Before going out to tender, the council realised that there were a series of issues with the site that would make it costly to bring forward. Specifically, the site was contaminated from an old landfill facility, new road junctions would have to be built and overhead cables would have to be buried. "In short, we knew there would be a considerable section 106 burden," says Winfield.

In response, the council reluctantly amended its wider policy for sites of ten or more dwellings, requiring private housing schemes to provide 50 per cent of homes as affordable. "It was a huge deal for members to accept less than 50 per cent," says Winfield. After intense debate, councillors agreed to reduce the figure to 40 per cent for Barton Park on the condition that all affordable units would be for social rent. A requirement that the development should deliver biodiversity net gain was also included in the tender documents.

Having made the decisions, Oxford City Council pressed ahead with procurement quickly to ensure that the chosen development partner could be involved with drawing up the area action plan (AAP) for the site. Grosvenor was appointed as joint venture partner in 2011. According to Alex Robinson, director of development, strategic land,  at Grosvenor, work on the AAP and planning application for Barton Park went hand in hand. Outline planning permission for the scheme was granted in 2013.

Given the high level of social housing and emphasis on enhancing biodiversity, viability could have been an issue. However, both parties worked hard to ensure that the project was deliverable and that compromises were not necessary. The fact the council agreed to buy the section 106 units at an early stage gave more financial certainty.

On the ecological requirements, Robinson says, despite the costs, overall they actually helped to strengthen the development financially. "We spent a lot of time creating a linear park at the outset of development," he says. "That went in 18 months before the first residents and we were able to generate good land and house values by putting large houses along the edge of the park."

In order to measure the development’s contribution to biodiversity, the partnership adopted a metric developed by Warwickshire, Coventry and Solihull councils alongside the Department for Food, Environment & Rural Affairs. In pursuit of its biodiversity net gain target, the project increased the number of trees on the site, planted new shrubs and wildflowers, and retained three existing hedgerows. The linear park also contains new ponds in order to encourage wildlife.

Offsite, meanwhile, the team worked with the Oxford Preservation Trust to restore ancient hay meadows at Marston Hamm and open up the land to the public. It is also currently working to maintain and preserve Sydlings Copse, a Site of Special Scientific interest to the north of the site.

"The work on biodiversity meant a bit of extra expenditure," says Robinson. "It took time and effort but did not place huge strains on the planning gain requirement. This, and most of the healthy living measures were achievable through good design."

Grosvenor is an unusual developer in that it takes a very long-term view on profitability – it has been developing properties in central London, for instance, since around 1700. However, the project still demonstrates that developers should be able to realise a profit while providing a high level of social housing and biodiversity net gain.

Planning authorities need to be flexible on affordable housing requirements. Jane Winfield, head of regeneration and major projects at Oxford City Council, says councillors were reluctant to deviate from the policy of providing 50 per cent affordable for large schemes, but ultimately recognised that achieving 40 per cent social rented was satisfactory.

Calculations may change as a project progresses. "The initial viability calculations are just a blueprint," says Winfield. "When you are looking at the original cash flow projections, you don’t really know what you are going to be building. You don’t know how things might change."

The costs of ensuring net biodiversity gain can be offset by amenity. Alex Robinson, director of development at Grosvenor, says building the linear park early on in the development process meant the company was able to achieve higher sales values for the homes for private sale on the development.