"The effect of [the ruling] is colossal," says Seán Woodward, leader of Fareham Borough Council and chairman of PUSH (the Partnership for Urban South Hampshire), a group of 11 local authorities that says some of its members cannot grant planning consents for fear of breaching European Union habitats regulations. "Planning in south Hampshire has ground to a halt." David Hayward, planning policy team leader at Havant Borough Council, adds: "We deal with habitats laws as par for the course here as we’re in a protected area, but on this issue there was, and still is, no resolution." Hayward and Tim Pike, Havant’s deputy leader and the councillor responsible for planning, regeneration and communities, are hoping a solution can be found quickly.

On November 7, 2018, the ECJ ruled in two joined cases related to the EU Habitats Directive, known together as the ‘Dutch case’ (C-293/17 and C-294/17). Its judgment raised the bar that development projects would have to clear when being assessed to see if they breached rules protecting sensitive habitats, such as EU "special protected areas" (SPAs). During these appraisals, known as "appropriate assessments", promoters of such projects will often cite measures that they argue will mitigate any habitat harm. The ECJ judges said that assessors should not take these measures into account, "if the expected benefits of those measures are not certain at the time of that assessment".

The decision has had far-reaching repercussions for developers. In June, wildlife regulator Natural England responded to the case, and other ECJ rulings (see panel below), by issuing new guidance to councils in the Solent area on compliance with habitats regulation assessments (HRAs). It took a much tougher stance on pollutants such as nitrates and phosphates in water environments.

In the Solent and Southampton Water SPA, concerns have been raised for years over high levels of nitrate pollution. Nitrates are chemicals found in agriculture and domestic wastewater (sewage). If they enter the water supply, they cause excessive growth of green algae, resulting in oxygen depletion and the creation of  a so-called "dead zone" where no other organisms can survive. This has devastating consequences for marine and bird life.

In 2018, according to its advice note, Natural England found that a number of sites in Solent harbours were in an "unfavourable condition" (see bar chart, right), which means the percentage cover of green algae is greater than 75 per cent.

Consequently, Natural England predicted a "likely significant effect" on such protected sites "due to the increase in wastewater from new developments coming forward". Its advice recommends that local planning authorities in and around such high-nitrate areas should withhold planning permission unless stakeholders are absolutely sure they can eradicate the negative impact from a development.

Additionally, the regulator advised that, to avoid judicial review of their permissions, new housing schemes that could affect the SPA should demonstrate "nitrate neutrality’. This means a scheme’s nitrate output must not exceed that generated by the previous land use.

All types of proposed housing in the Solent SPA area and other forms of "overnight accommodation" such as hotels and hospitals, are viewed by Natural England as factors that will increase the population within the catchment area. Unless they are nitrate neutral, such schemes will further raise nitrate levels in an already polluted environment, the regulator says.

Although Natural England’s advice is not legally binding, five PUSH councils – Portsmouth, Fareham, Gosport, Havant and East Hampshire – have suspended the granting of planning permission for new housing schemes within the SPA unless they can show nitrate neutrality. As of June, at least 10,000 units were on hold, and the number is far higher now, says Woodward. Among the affected schemes are Tiger Developments’ plans for 108 homes at the Drayton Dairy depot site in Portsmouth and the 49-home Crewsaver scheme in Gosport.

PUSH authorities that sit further from the SPA – including Chichester, Winchester, Test Valley, Southampton, Eastleigh and New Forest – continue to determine applications, including for housing.

Natural England’s advice is a "cautious interpretation of judgments that were not intended to oppose development, but to manage its impact," says Chris Jack, senior consultant ecologist at ecological consultants EPR. Nonetheless, it has resulted in what commentators call  a "moratorium" on development in affected areas pending solutions.

Elsewhere, 130 applications totalling 1,100 homes are on hold in Herefordshire. In July, Natural England notified Herefordshire Council that it would no longer be able to support planning applications that could affect the River Lugg SPA, unless phosphate levels in the river could be reduced. Phosphates – which are typically generated by agricultural pesticides and fertilisers – are another byproduct of domestic wastewater. As high quantities of phosphates are being recorded in the SPA – in 2018, the level was 0.1003mg/litre, against its EU-based target of 0.05 mg/litre – Natural England said there was "limited scope" to approve additional housing developments. The stalled applications include a 500-home scheme near Bromyard.

The warning came as a surprise to the council, which like many of England’s 82 EU-designated SPAs, has a strategy to protect the environment – the River Lugg Nutrient Management Plan (NMP).

"Until now, we’ve been able to reassure inspectors that any negative impact from development will be mitigated," says Kevin Singleton, Herefordshire County Council’s team leader for strategic planning. "The Dutch case says this is insufficient – you need scientific certainty that your strategy will succeed." Singleton hopes for progress at the next NMP board meeting in January.

Commentators have identified other parts of the country with protected sites and high nitrate or phosphate levels. These include: the River Mease Special Area of Conservation (SAC) in the Midlands, which has an NMP to tackle high levels of nitrates; the River Clun SAC in Shropshire, which has nitrate and phosphate pollution; the Fenlands SAC in Cambridgeshire; and areas along parts of the River Avon that are high in nitrates. Dorset’s Poole Harbour also has an NMP. But so far, none of these places has restricted planning permissions in response to Natural England’s updated advice.

Back in Hampshire, councils have identified various options to break the deadlock. One short-term solution being considered by the five councils to restart housing permissions is to approve applications with a ‘Grampian condition’. This would allow construction to progress, but prevent post-completion handover to buyers until the scheme has achieved nitrate neutrality.

But such approvals are risky. In August, inspectors rejected on appeal a scheme at Hayling Island that had a Grampian condition attached, questioning its viability.

PUSH councils are also working on longer-term solutions to achieve nitrate neutrality, based on Natural England’s suggested ‘nutrient budget’, which calculates net nitrogen gains and losses from a proposed development to enable local authorities to build up ‘nitrate credits’ to offset any impact. Portsmouth City Council, for example, has proposed banking the nitrate savings made by the fact that 270 council buildings are vacant, and improving water efficiency in existing housing, in order to approve further dwellings.

The city council is also proposing sustainable urban drainage systems, which help to manage wastewater runoff from homes and urban areas. Another potential remedy is the use of oyster beds in the Solent; oyster shells contain bacterial microbes that help to break down nitrogen. Meanwhile, Fareham Borough Council is considering developer contributions to create and maintain nitrate-negative habitats to offset the impact of new schemes. Developers in Fareham, too, have started buying  sites for the purpose.

Another option is to make the case that any nitrates generated by new housing on former agricultural land would be less than those from farming, which is recognised as one of the biggest contributors to nitrates pollution. So far, one Solent SPA scheme has been approved on the grounds that it is nitrate neutral or better – Barratt David Wilson Homes’ Forty Acre Farm, a 320-home and 66-bed care home in Havant. It achieved a net nitrate benefit due to the farm’s high levels of nitrogen compared with the proposed scheme, says Peter Home, associate director at consultancy Turley.

This approach of taking land out of agricultural use to create nitrate-neutral housing would also incentivise greenfield development, notes Havant’s David Hayward. As well as contradicting national policy, he says this "threatens councils’ ability to deliver sustainable housing". Vicki Potts, head of planning policy at East Hampshire District Council, agrees. "Some of the sites we had allocated cannot be delivered on a nitrate-neutral basis," she says. "We may have to allocate rural greenfield sites we would not otherwise look at."

Meanwhile, one or two small Hampshire developers will be "close to bankruptcy" if their frozen schemes are not approved soon, says Keith Oliver, director of consultancy Town Planning Experts. He calls for a "joined-up approach" among government agencies.

The Ministry of Housing, Communities and Local Government (MHCLG) has yet to issue guidance on the issue, although it has met PUSH and other stakeholders. "Natural England’s advice runs counter to MHCLG’s message to ‘keep building’," says Oliver. The advice could delay delivery of local plans, says Sarah Platts, president of the Planning Officers Society, which represents public sector planners.

PUSH wrote to housing minister Esther McVey on October 25 to request that the next application of the MHCLG’s housing delivery test, which penalises councils for under-delivery of housing, be suspended until the issue is resolved. McVey had yet to respond at the time of publication, but an MHCLG spokesman says: "We are working to review advice being given to local authorities and ensure it is consistent and appropriate, and are exploring opportunities to support local authorities in developing strategic solutions."

Planning barrister Richard Harwood QC, of 39 Essex Chambers, describes Natural England’s advice as "not terribly helpful".  "If there is a genuine environmental problem, effectively shutting down housebuilding across South Hampshire is not a sustainable solution," he says.

A spokesman for Natural England says that, while local planning authorities must have regard to its advice, it is not binding. It has urged councils to seek their own legal advice, and says it is "working closely with them to address the issue".

In the meantime, councils and developers are trapped in planning gridlock while they invest scant resources in assessing solutions to help them tackle this knotty environmental challenge. 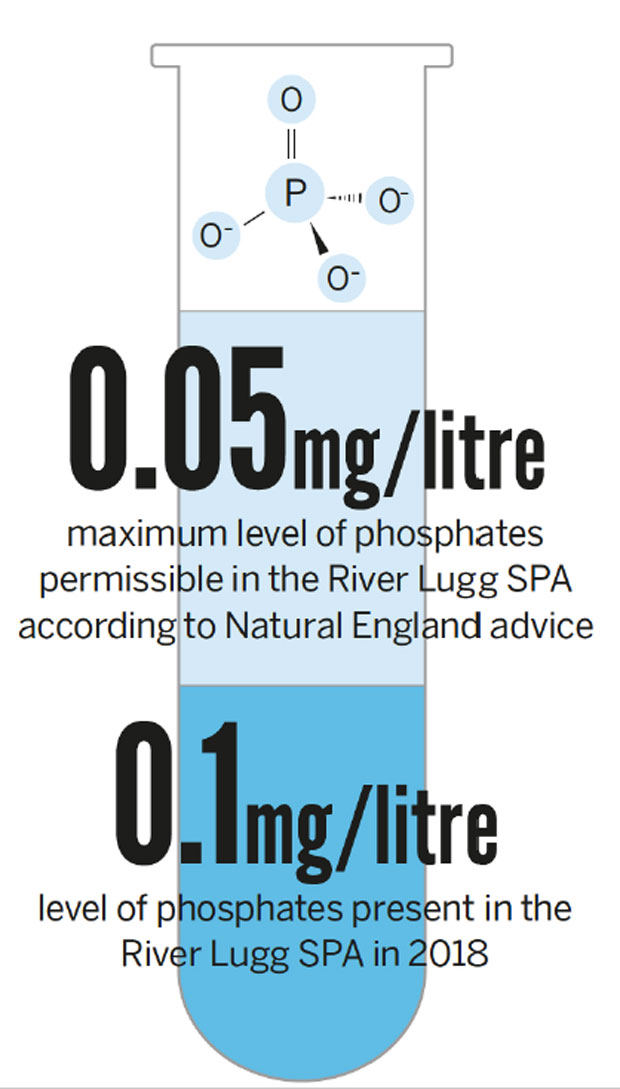 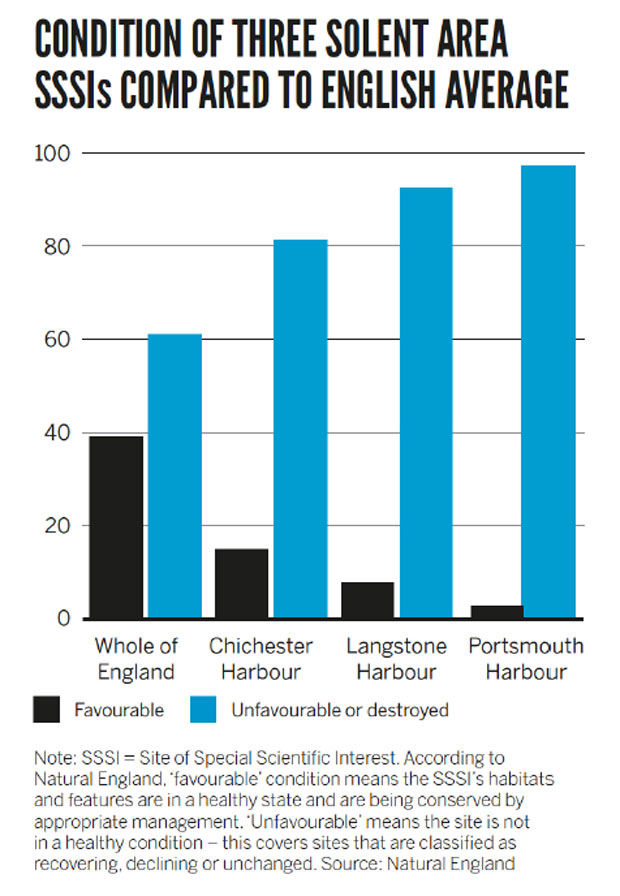