This year’s consultancy survey shows firms’ planning fee income has once again increased (see footnote for how we define planning fee income). Comparing the 50 biggest firms that provided income data in 2018 and this year, aggregate income grew from £474 million to £537 million, a rise of more than 13 per cent.

Average fee income per firm rose from £9 million to £10 million in the same period. Average fee income per fee earner also went up in the last year, from £104,546 in 2018 to £107,714, a rise of three per cent. The proportion of the top 50 that saw an increase in fee income in the last year is also pretty healthy, with just shy of two-thirds (64 per cent) showing an increase. On the flip side, 32 per cent of firms saw income fall, while four per cent reported no change. 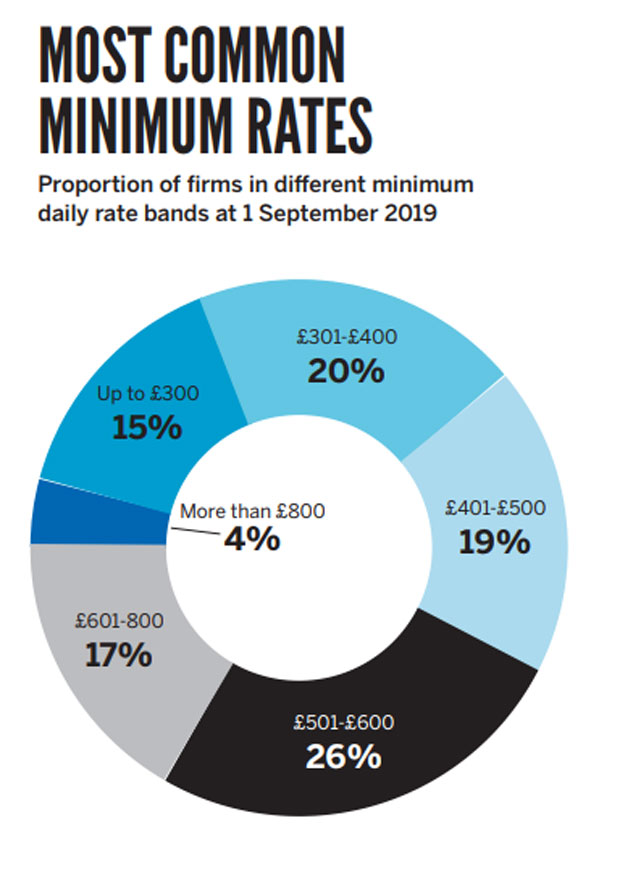 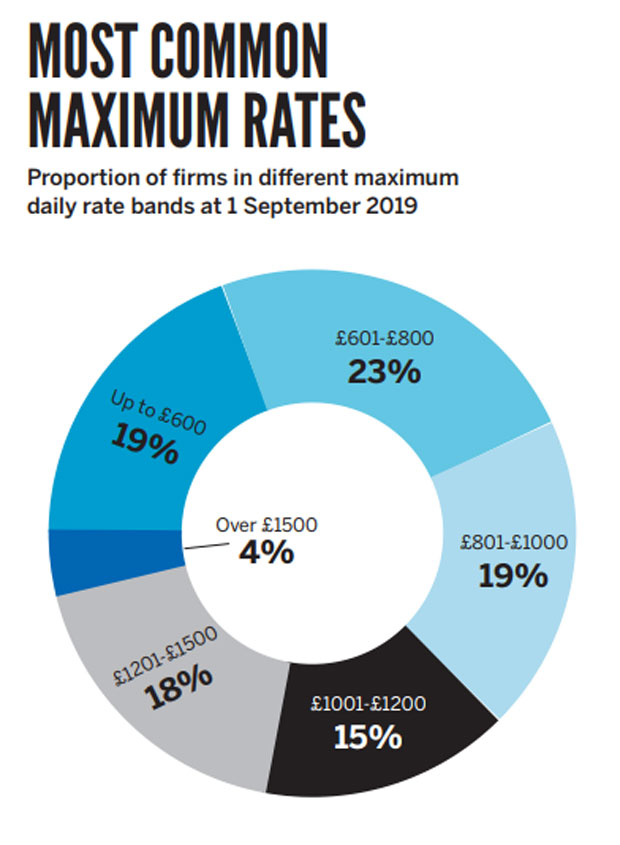 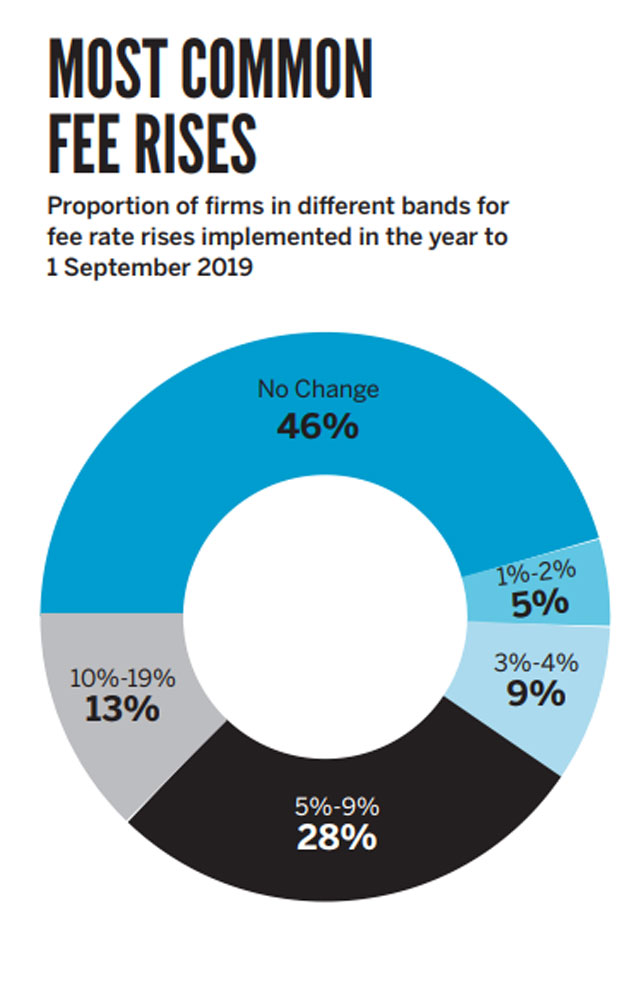 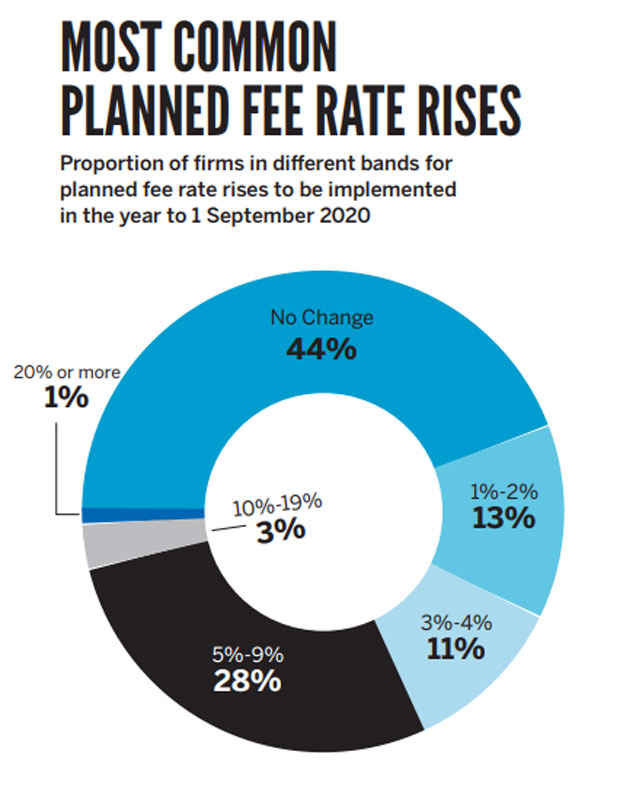 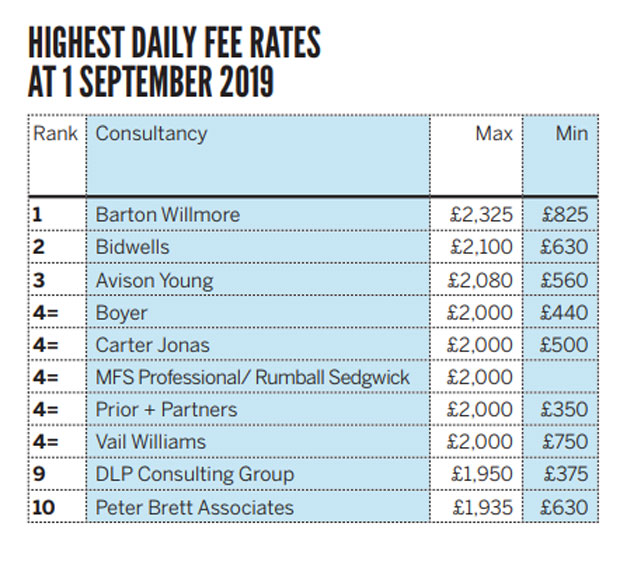 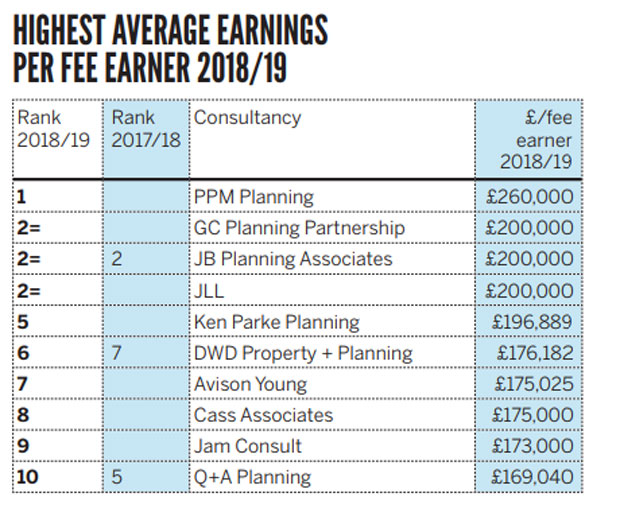 Looking at the 148 companies that submitted a response to this year’s survey, on average daily fee rates charged went up by three per cent in the year to 1 September 2019. That is an increase on the previous year, when average fees only went up by 0.04 per cent across the board. However, companies were less likely to have increased fees this year – 46 per cent reported they made no changes to their fees in the last year, compared to 41 per cent last year. The proportion of firms charging a maximum daily fee of more than £1,500 also declined, from 24 per cent in 2018 to 19 per cent this year.

The survey also makes clear that the daily fee rates charged by consultancies vary hugely. Taking just the 25 biggest companies measured by the number of chartered town planners they employ, Barton Willmore emerges as the firm that charges the highest fees, at £2,325 a day for work by its senior partner Mark Sitch. Other Barton Willmore partners’ time is charged at £2,100 a day, the same as that charged by the most senior planners at Bidwells, which comes second on the list. Conversely, the lowest minimum fees among a Top 25 company are to be found at Atkins, which charges £300 a day for its most junior chartered planners. Joanne Farrar, practice manager for the planning, economics and heritage team at Atkins, says: "We try to be as competitive as we can."

In terms of the highest earning individual consultancies, Arup tops the table for the second year in a row. In the last year, the company reports £144 million in planning fees, compared to £109 million in the previous year, an increase of 31 per cent. According to Kieron Hyams, associate director at Arup, transport planning was the biggest area of growth for the company. "We have been working for the public sector doing some massive infrastructure projects, not least High Speed Two," he says.

Other infrastructure work he cites as contributing to the increase includes work for the Crown Estate, the east-west rail project linking Oxford and Cambridge and the 10,000-home Meridian Water project in Enfield. "Everyone thinks it’s a housing project," says Hyams, "but everything there will be led by the enabling infrastructure. There is a new station, and critical road and accessibility improvements that have to go in to make the housing sustainable." 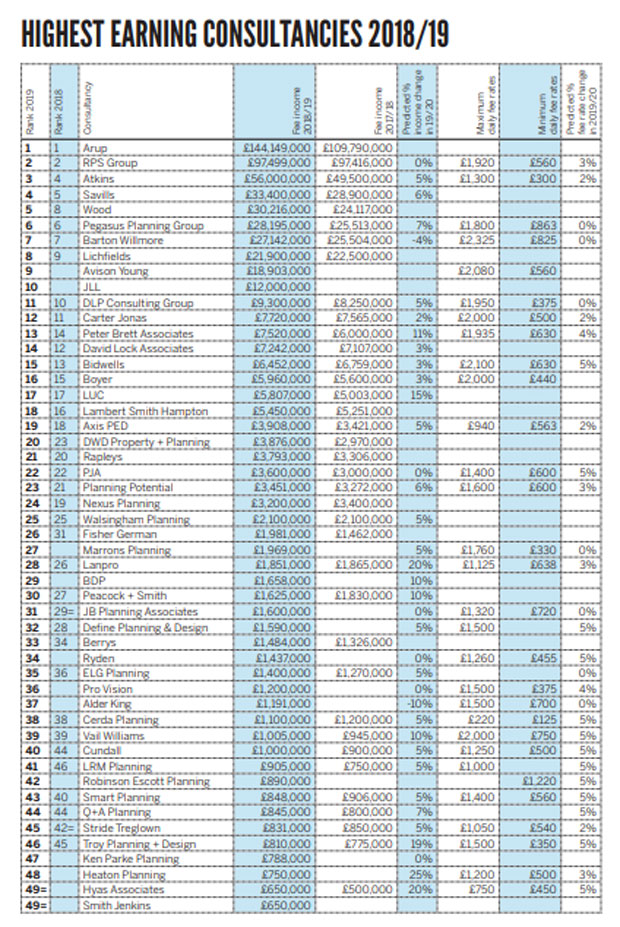 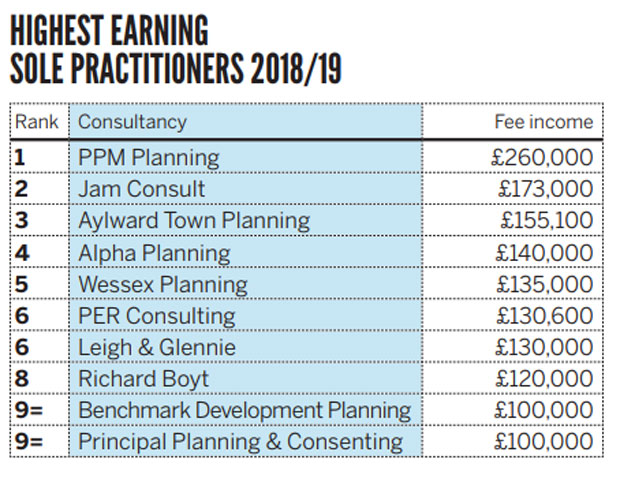 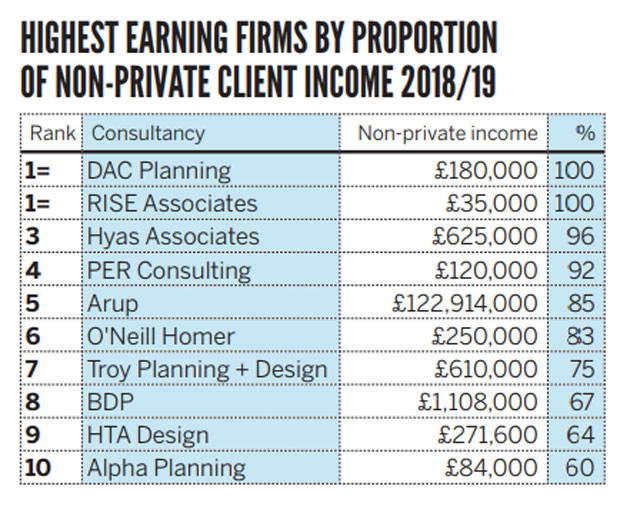 The company has also boosted revenue by diversifying into helping authorities such as Bristol City Council with development management. And it has used big data and artificial intelligence to generate revenue from new "plantech" service lines. For instance, the company has developed virtual reality sound booths that allow users to have both a visual and audio experience of proposed new developments. These can be used in public consultation events as well as by designers.

As it did last year, RPS Group occupies the second spot in the ranking of highest earning consultancies. Atkins moves up the table to take third place, while Savills moves up from fifth to fourth. Savills saw its income rise by a substantial 16 per cent year on year, from £28 million to £33 million. According to David Jackson, Savills’ head of planning, revenue from the company’s energy and infrastructure team has been key to rising income in the last 12 months. Launched around five years ago, the team initially focused largely on renewable energy work, but has recently diversified into broader nationally significant infrastructure project work. Jackson cites work on the Wylfa nuclear power station as an example. "Taking projects through the development consent order process has been a real source of growth for us," he says.

The biggest climber in the top ten was Wood, which rose from eighth in 2018 to fifth. In the last year, the company’s planning fee income increased from £24 million to £30 million or by 25 per cent. According to Bhoseok Nam, principal planning consultant at Wood, the reason can be summed up in a single word: Heathrow. "The airport is preparing its development consent order application for submission in the summer next year, so it’s been really gearing up in terms of the workload and that has a direct impact on our fee income," he says. The company has also been working on other aviation projects at Luton and Bristol airports.

Outside the top ten biggest earners, one of the most notable changes in the last year is to be found at PBA, now part of Stantec, which comes in at 13th place. The company saw a slight decline in the number of chartered town planners it employs in the last year (from 45 to 42) and yet its planning fee income increased by 25 per cent. Bernard Greep, director for planning and growth, at the company, says that the increase is partly explained by a rise in fee rates. PBA’s acquisition by Stantec in 2018 also provided access to a wider client base, Greep adds.

In terms of the companies that bring in the highest fees from work in specific sectors, there have been some interesting changes in the last year. In terms of greenfield housing, for instance, Barton Willmore has overtaken RPS to take the number one spot. With regards to brownfield housing, Arup replaces WYG (which didn’t take part in this year’s survey) in the number one position, while Lichfields moves up into second place.

When it comes to fee income from energy work, Atkins replaces RPS in pole position, having increased its income from the sector by 11 per cent. According to Farrar, this is largely down to the company’s work on the Wylfa Newydd, Bradwell and Hinckley Point nuclear power stations. Finally, Arup has moved up from fifth to first place for income derived from the commercial and industrial sector, after more than doubling its income from such work in the last year. 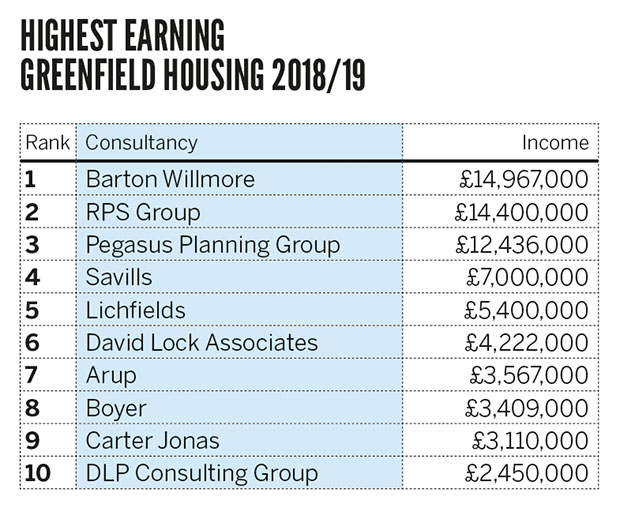 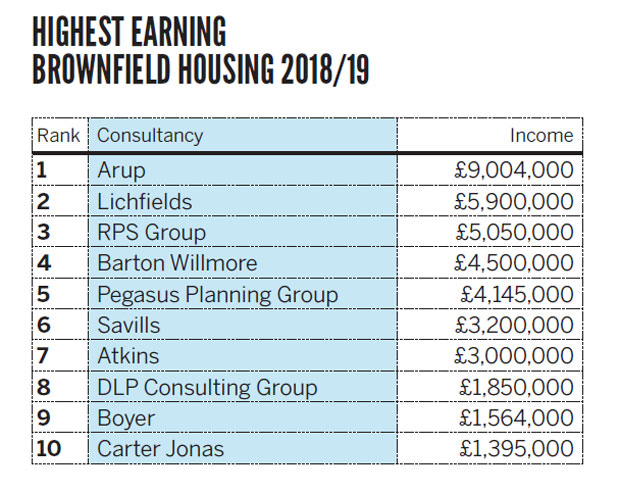 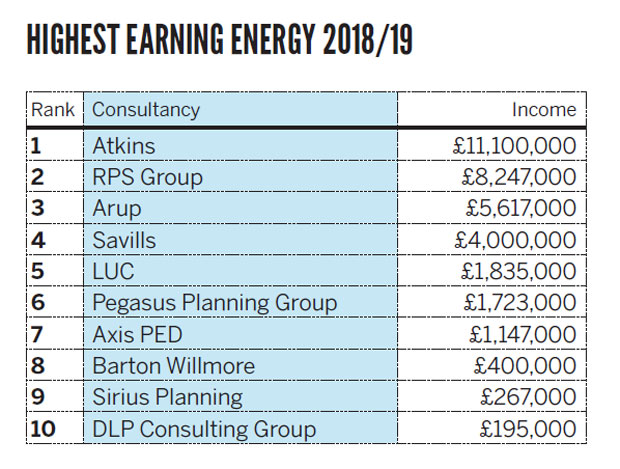 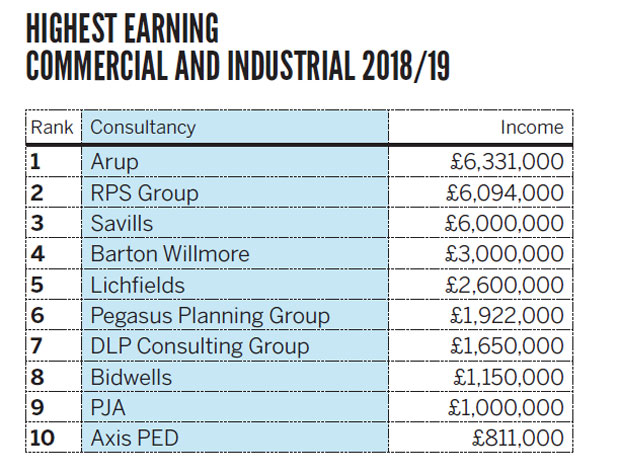 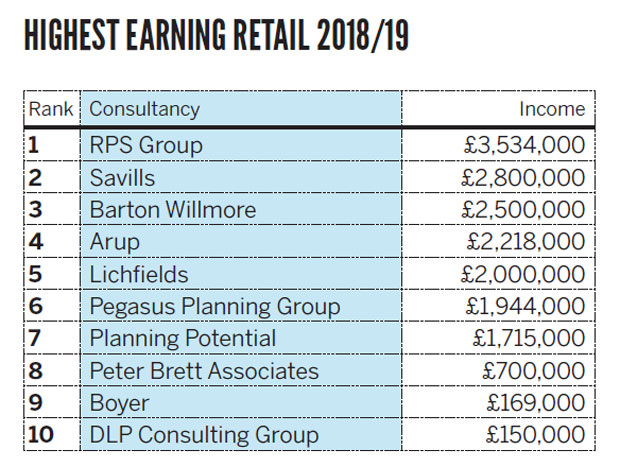 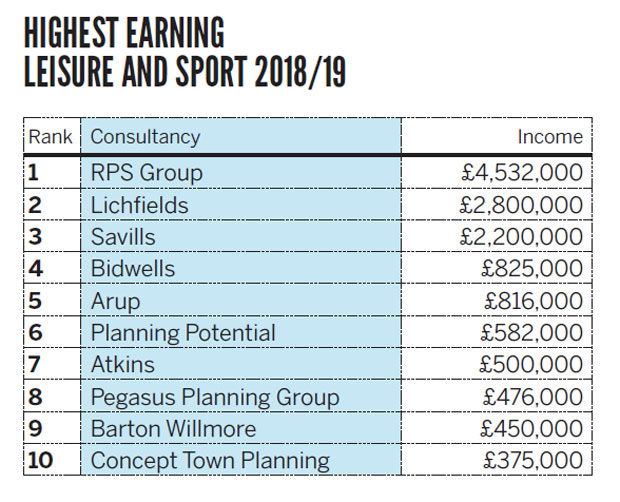 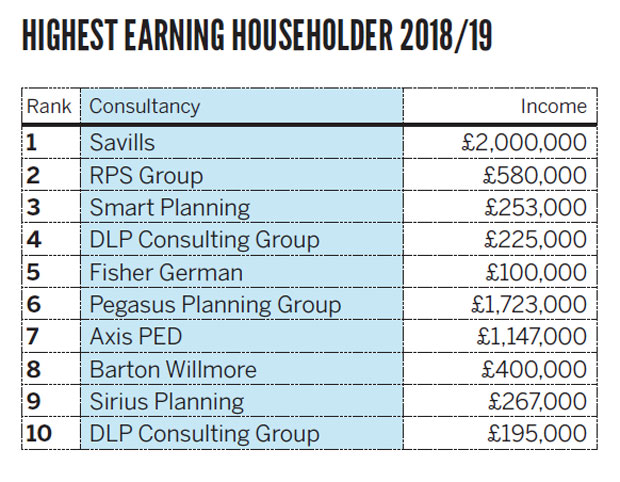 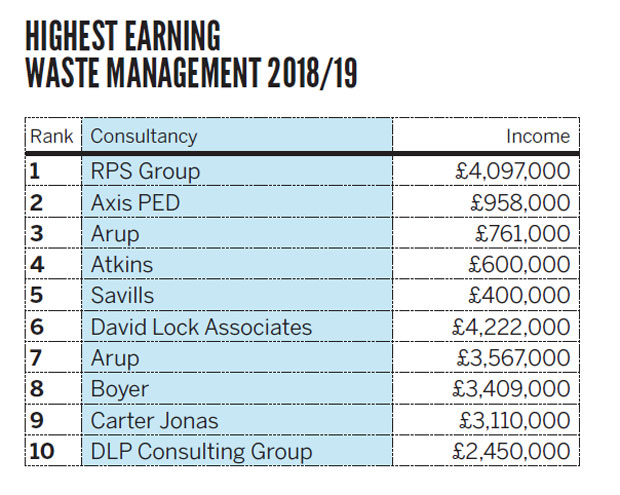 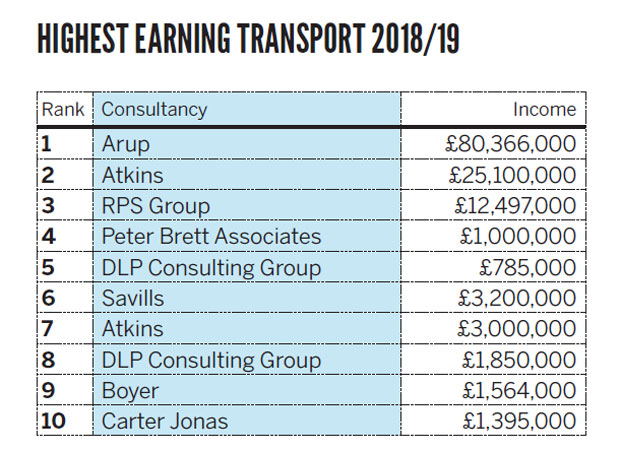 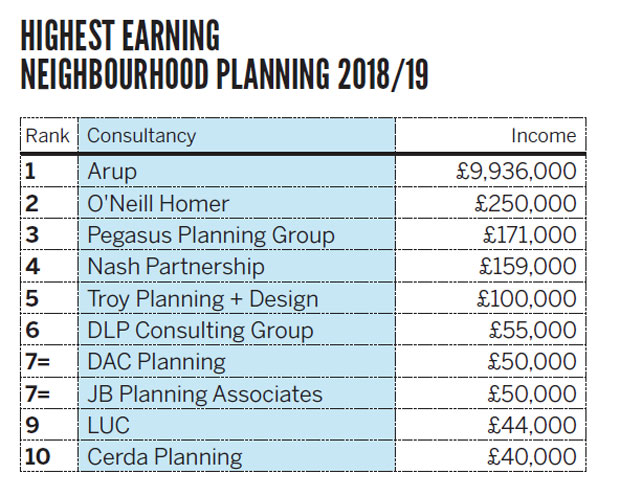 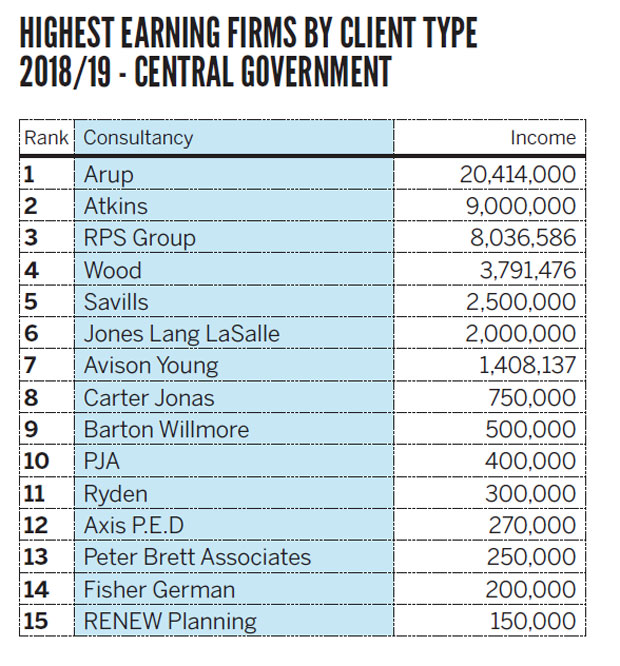 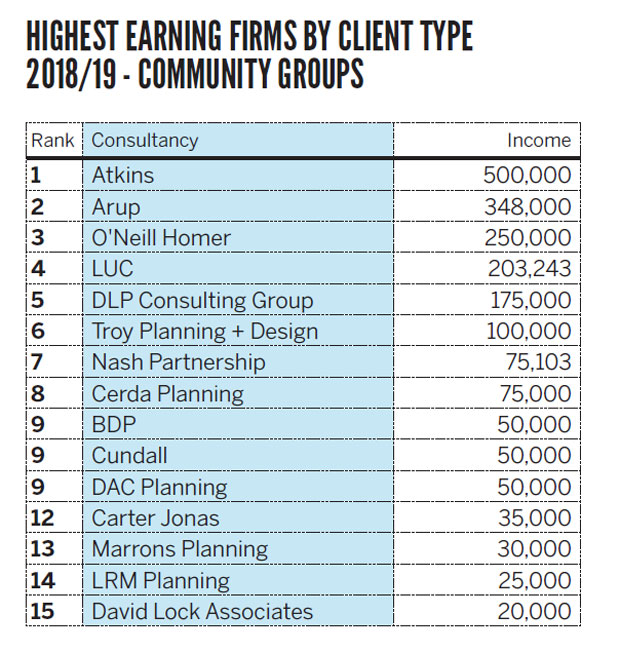 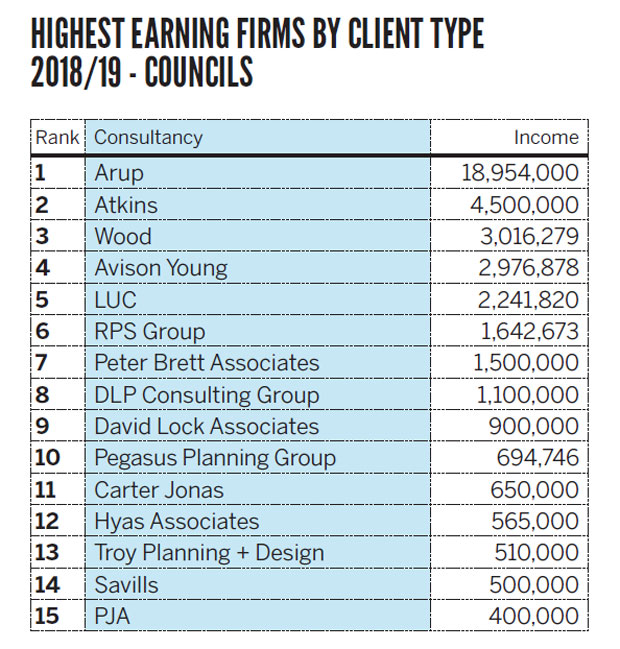 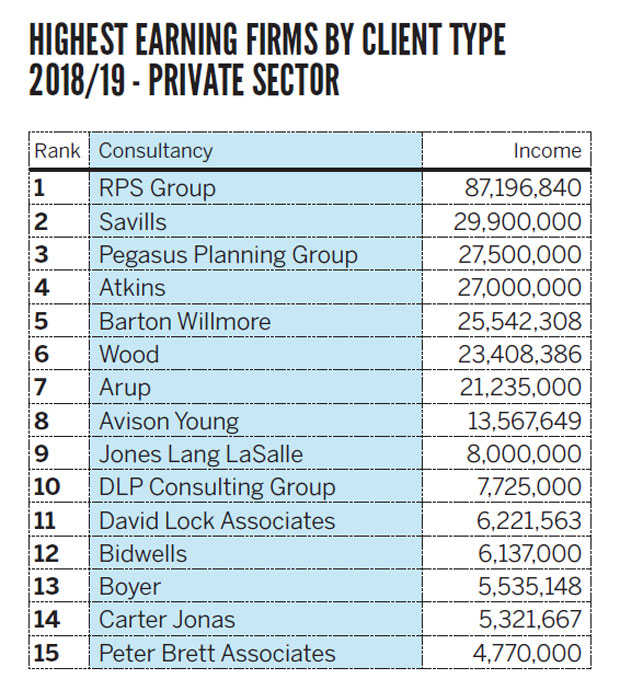