However, doubts have been raised about the legality of the move.

Last week, the long-running saga of South Oxfordshire District Council's emerging local plan took a dramatic turn. On Wednesday 9 October, the housing secretary Robert Jenrick, issued a holding direction just a day before a full council meeting to vote on a cabinet recommendation to withdraw the local plan from examination. Jenrick said this was to give him time to consider whether to take the decision out of the district’s hands, but the council subsequently challenged him over the legality of the move in a testy exchange of letters with the Ministry of Housing, Communities and Local Government (MHCLG).

On this one local plan hinges more than £500 million of central government funding, a 100,000-home Oxfordshire-wide plan for growth and, arguably even, the broader vision for one million homes in an arc of development running from Oxford via Milton Keynes across to Cambridge.

The row comes after a coalition of Liberal Democrat and Green councillors in March took charge at South Oxfordshire following a local election in which they campaigned against the housing proposed in the plan. The document included significant green belt releases and an overall housing requirement nearly double the need calculated under the government’s "standard method" (see bar chart below) – in return for which the authority was to receive its share of growth deal and infrastructure funding. 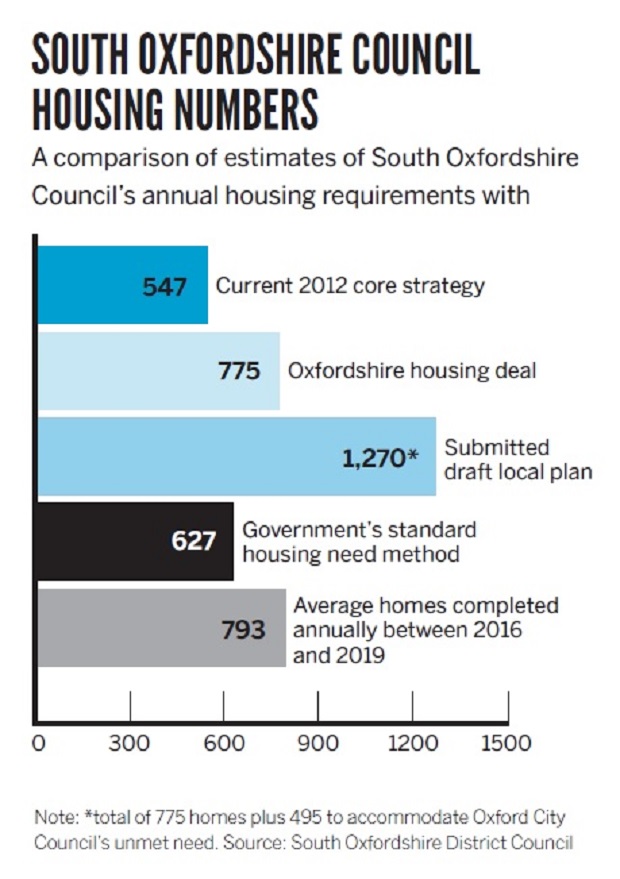 Mary Cook, a partner at planning law firm Town Legal, said it is not clear that section 21a of the Planning and Compulsory Purchase Act 2004 – under which the minister issued the "holding direction" – actually gives Jenrick power to intervene in this case. She said the powers appear to have been designed, as the council has argued, to allow the secretary of state to address deficiencies in existing draft plans. "There is a real legal argument about whether or not this grants the power in a case where an authority has decided to withdraw," Cook said, adding that South Oxfordshire could appeal throught the courts.

However, this wouldn’t necessarily matter. The secretary of state also has "default powers" in section 27 of the same act, under which he can take decisions where authorities are "failing or omitting to do anything it is necessary for them to do" around plan preparation. Planning barrister Christopher Young QC, of No5 Chambers, said: "The council might argue that section 21 only permits the secretary of state to intervene when he considers the plan to be unsatisfactory. But he has other powers to intervene." Intervention was now "as certain as night follows day" if the plan is withdrawn, Young added.

If so, it would be the first time a secretary of state has acted to approve a plan in defiance of a local authority’s wish. David Murray Cox, associate director at consultancy Turley, said: "The position has become far too entrenched on both sides for them to back down. There is a significant prospect [Jenrick] will intervene."

What makes intervention likely is that much depends on the outcome. A report to South Oxfordshire’s cabinet made clear that £218 million in Housing Infrastructure Fund (HIF) money, contingent upon the release of sites for new settlements around Didcot, would be lost in the event of a plan withdrawal, as well as, most likely, the £215 million promised to the county under the Oxfordshire housing deal. Derek Stebbing, a former local authority planning policy manager and now a consultant at Intelligent Plans and Examinations, said: "There are bigger things at play here. Letting the plan be withdrawn is not a message Jenrick wants to send in a strategic growth area."

Neighbouring authorities have already expressed their opposition to South Oxfordshire’s intended move and warned that it also puts a second HIF bid of £102 million to improve the A40 in jeopardy. The Oxfordshire housing deal also benefits authorities in the county by only requiring them to demonstrate a three-year housing land supply rather than the usual five. Hence, Vale of White Horse Lib Dem leader Emily Smith last week said her authority could "lose our housing land supply instantly" if the housing deal fell alongside withdrawal of the plan. Town Legal’s Cook said: "The government doesn’t want to sit and do nothing and see a growth deal being unpicked. And it doesn’t want Lib Dem candidates able to go in to the next election saying: 'Vote for me and I’ll hold back growth.'"

Some see this row as an indication that Jenrick is willing to be more interventionist than predecessor James Brokenshire. "This action says – if you write reports saying you intend to withdraw, then you can expect government intervention," said Cook. However, others believe Jenrick’s response does not show a general change in ministers' appetite for intervention. A source close to the Oxfordshire authorities, who did not wish to be named, said: "Government is still very reluctant to get involved because of the political ramifications. South Oxfordshire is not the only authority to go back on housing numbers but it’s the only one with hundreds of millions of pounds of funding riding on it." Likewise, Peter Canavan, Oxford-based associate partner at consultancy Carter Jonas and a former principal planning officer at South Oxfordshire Council, said: "The set of circumstances here are such a strong political cocktail that other authorities will not be too concerned about their own situations."

If intervention does happen, then Jenrick can either take on the plan himself, or direct another authority – such as the county council – to get it adopted. According the source close to the process, there is also the chance that the Oxfordshire Growth Board, which has been set up to deliver the Oxfordshire 2050 joint strategic plan, might also take on the role. However, this would require a significant change in its constitution, as currently South Oxfordshire would be able to veto its decisions. The source said: "No path of intervention will be easy, but there is a view that the joint plan team would be best placed to take on these decisions. This could happen if a joint planning committee were formed under section 29 of the act."