Housing secretary Robert Jenrick used the recent Conservative Party Conference to resurrect the Tories' long-held proposal to ease planning rules to make it easier for developers to demolish commercial buildings and replace them with homes.

Planning has compared government data that shows the current gap between office land values in English towns' central business districts (CBDs) and the average land value for housing across the district or borough in which the town is located.

If relative land values remain unaffected by the government’s announcement, this data could indicate where demolitions under the new powers could be more attractive to developers and property owners.

Planning's analysis shows that, at £17.7m a hectare, residential land is 7.17 times more valuable than central business district office land (£2.5 million a hectare) in the London Borough of Bromley.

Bromley’s ratio is significantly higher than the local authority and town with the second-highest gap in its Aylesbury in Buckinghamshire, which is part of Aylesbury Vale District Council.

Its ratio is 4.86, which means that residential land there is worth £4.2 million a hectare compared to £865,000 per hectare for office land.

Three other London boroughs – Bexley, Harrow and Kingston-upon-Thames, also appear in the top 10.

However, Solihull in the West Midlands appears third on the list, with a ratio of 4.75.

Government figures also show that the London Borough of Richmond had the highest number (329) of office-to-resi applications under existing PD rights – which allow conversions but not demolitions - in the five years up to 2018/19.

With 220 applications, Bromley was seventh in the list, with the top 10 made up entirely of London boroughs, apart from Bristol City at number ten. 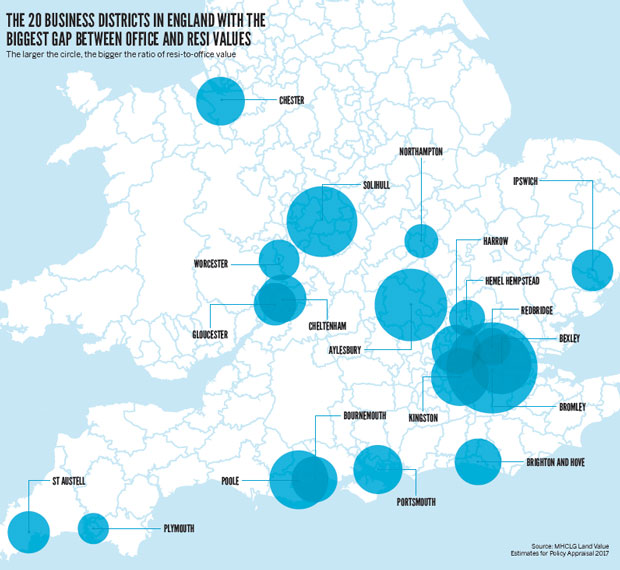 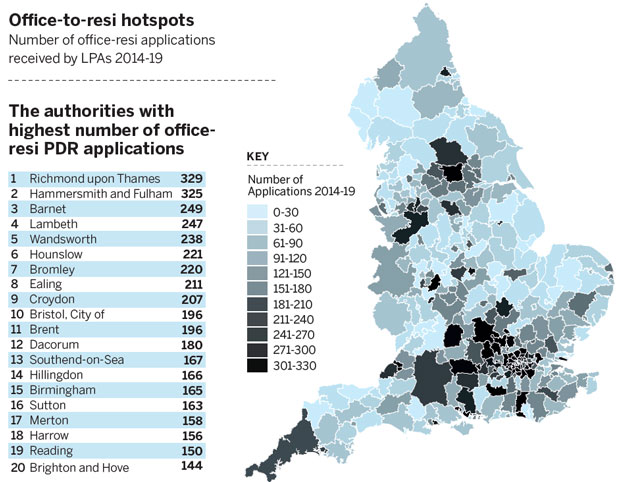 An analysis article examining how ministers' proposed "freedom" to demolish office buildings for new homes would work can be found here.