The research into housing delivery test action plans carried out by Planning, finds that engagement with developers is cited as an action to boost under-delivery in 87 per cent of the plans. This includes the use of developer forums, many of which are already in existence, and liaison with developers to review delivery rates.

What each of the 67 authorities is doing: a council-by-council breakdown

Stalled or delayed sites, limited site availability and housing market factors are among the most common causes of under-delivery of homes, research by Planning has found.

Planning reviewed all 67 action plans which have been published for the parts of England that are underperforming most on housing delivery.

Other actions most commonly referred to in the action plans are the progression of local plans, mentioned by 84 per cent of action plans, with 52 per cent of plans also committing the authority to bringing forward new site allocations in plans.

Michael Knott, director at consultants Barton Willmore, said the key for such plans was that sites allocated are realistically deliverable and will start delivering housing early in the plan period.

The third most popular action cited (by 67 per cent of plans) was the direct delivery of housing, either through the establishment of a council-owned housing company or involvement in joint ventures to deliver new homes.

"The action plans should be used as an opportunity to get a focus corporately on prioritising increased delivery," said Stephen Hill, director of consultancy Hyas Associates, who assisted the Planning Advisory Services with pilot work on action plans last year.

More  than 40 per cent of the action plans cite brownfield land registers as a part of the solution to boosting housing delivery. Some specifically state that they will consider granting planning permission in principle to sites in part 2 of their registers to bring forward housing sites.

"If that’s something that flows from action plans, then that’s a positive," commented Andrew Jackson, head of development economics at consultancy Boyer Planning. 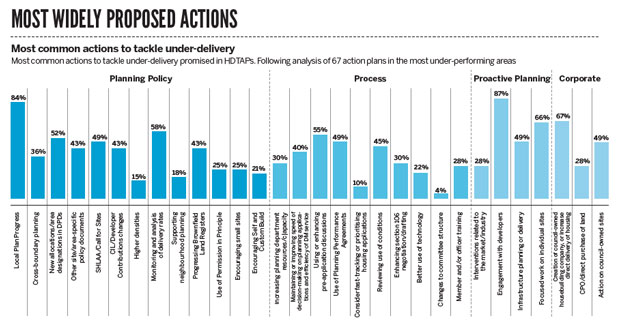