That evening, council and police officers attended both sites and asked the groups to move on; they refused. Ordinarily, such a standoff would last several weeks while the council sought an eviction notice from the courts. This time was different.

In May, Epsom and Ewell Borough Council had been granted a three-year injunction preventing unauthorised encampments at 57 council-owned sites, including Epsom Common and Horton Country Park. The court granted the interim injunction because it was satisfied that the number of unauthorised encampments in the borough had increased, partly because displaced families had moved in from neighbouring districts that had already secured similar injunctions. The council also said that such unauthorised camps harmed amenity due to anti-social behaviour, fly-tipping and waste dumping.

The morning after the two camps were established, council officers asked the High Court for a writ ordering the groups to leave. The court obliged. Later that day, officers attended both sites with bailiffs and police to supervise the eviction.

"Previously the more limited legal remedies available to the council meant it often took several weeks and a significant amount of work before a positive outcome could be achieved," says a council spokesman. "Since the injunction, those few groups that have located themselves on council land without permission have left quickly, once they were formally made aware of the injunction."

Injunctions barring Gypsy and traveller encampments are increasingly common. Epsom and Ewell is one of at least 30 local authorities with an injunction barring unauthorised encampments (see graphic). Several more councils have had temporary injunctions granted within the past 12 months. They have argued that these injunctions are a necessary defence against antisocial behaviour linked to unauthorised camps. Typically, the courts agree.

Former Conservative councillor Richard Bennett is now a trustee of the London Gypsies and Travellers advocacy group and provides training to elected members on issues facing the travelling community. He sees unauthorised encampments as a direct consequence of a lack of official pitches. "I must have done 140 training sessions," he says. "On each occasion we say we can stop unauthorised encampments at a stroke. What people don’t like to hear is ‘all you have to do is provide sufficient authorised pitches and the problem will go away’."

Planning policy dictates that councils must provide sites for Gypsies and travellers. Government policy instructs local authorities to assess need and identify a five-year supply of sites, in the same way as sites must be identified to house the settled community. Local plans must include this provision to be found sound. So why do Gypsy and traveller groups say there is unmet demand?

Michael Bullock is managing director at Arc4, a consultancy that conducts Gypsy and traveller need assessments for local authorities. He believes the definition of Gypsies and travellers set out in national planning policy means the official need for sites is often an underestimate. He cites revisions to planning policy for traveller sites in 2015 that introduced a new definition. Previously, the guidance stated that individuals who had stopped travelling permanently due to ill health or old age would still be defined as a Gypsy or traveller. The new guidance excludes such individuals, reducing the number for whom sites must be provided.

When conducting need assessments, Bullock says he will typically provide a council with two numbers – a "real" figure based on actual need and a figure based on planning policy. "Some know they need only meet the [policy] target and that’s the position an inspector would expect," says Bullock. "If they are going with the [policy] need they are not doing anything wrong. However, the definition of need should be broader and there should be better acknowledgement of those households that don’t meet the current definition."

Councils do not always get it their own way in terms of injunctions. After Epsom and Ewell was granted a temporary injunction preventing unauthorised encampments, it sought a permanent order. Its bid was denied. Deputy judge Leigh Ann Mulcahy QC said there was a shortage of authorised sites in the borough, adding that travellers have a right to a nomadic lifestyle and the court was required to have regard to the cumulative impact of injunctions nationwide. Because the council had not engaged with the travellers, the judge ruled that the case for a permanent injunction had not been substantiated.

In the same month, London Gypsies and Travellers successfully challenged a similar borough-wide injunction sought by the London Borough of Bromley, in a case heard by the same deputy judge. Debby Kennett, chief executive of London Gypsies and Travellers, said at the time: "[The judge] referred to the shortage of sites and stopping places, and also the cumulative impact of these injunctions on the Gypsy and traveller community across the country. The judge also recognised that simply pushing families out of one area into another was not a solution."

Bromley Council did not respond to requests for comment. Bennett says he expects an appeal but hopes the verdict will be upheld – and make it harder for other authorities to secure similar injunctions. But Steven Woolf, a barrister at Hardwicke chambers who has secured a series of injunctions in London and Surrey, has assured councils the judgment will not affect existing injunctions and that future applications may well be successful.

Woolf believes other authorities can learn lessons from the Bromley case providing their injunction applications give "careful thought" to the "welfare needs" of the traveller community and what land "they can occupy when passing through".

Injunctions may mean councils can move faster to evict Gypsies and travellers from unauthorised encampments. But experts warn that, without adequate authorised sites, injunctions simply shift the problem to neighbouring councils. Steve Jarman, senior research executive at Opinion Research Services, another provider of need assessments for councils, says: "If travellers have traditionally worked in the West Midlands and suddenly find it difficult to stay in Sandwell, Dudley or Solihull, they’re going to have to find somewhere else to stay."

Some authorities are calling for a government-led national strategy. Hazel Smith, cabinet member for housing at South Cambridgeshire District Council, says: "We have a choice either just to look at short-term fixes or to change the law to provide a solution for the future. A full review is needed with the aim of having a joined-up national approach."

Bullock says the Gypsy and traveller community is growing, meaning councils will need to face up to the fact that more sites will be required. "The travelling community has been here for 500 years," he adds. "It’s not going to disappear." 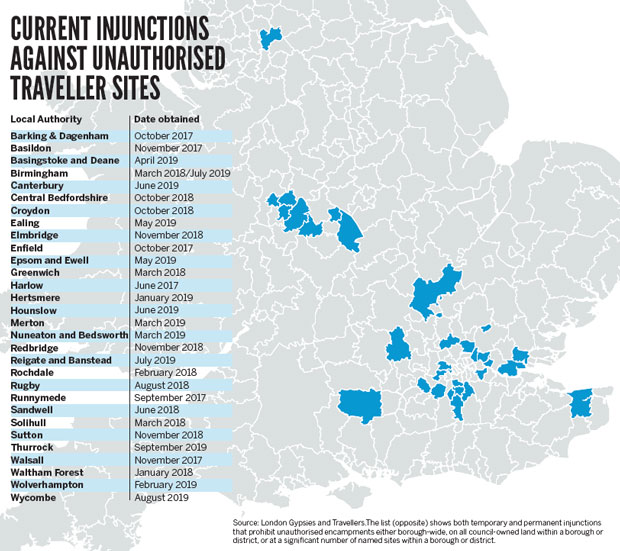