August is usually a time for summer holidays. But this year, for the 108 planning authorities identified by the government as under-performing on housing delivery, the month included a looming new work deadline.

By August, thanks to the government’s Housing Delivery Test (HDT), each council that had seen less than 95 per cent of its 2015-18 new homes target delivered was ordered to submit an action plan. In the document, the authorities were expected to pinpoint the causes of under-delivery, as well as the steps that they would take to improve matters. 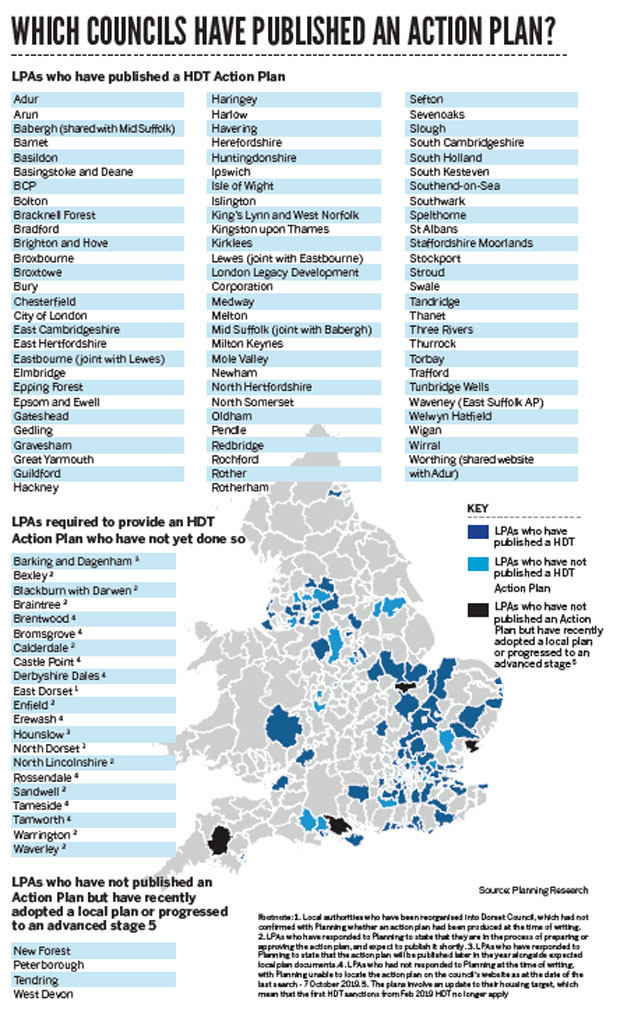 THE COUNCILS THAT MISSED THE DEADLINE

Planning has analysed the plans published so far. We found that 81 local planning authorities have published an action plan, including the new BCP Council, the three predecessor authorities of which (Bournemouth, Christchurch and Poole) had all individually been due to produce a plan. Of the remaining 25 local authorities that were required to produce an action plan when the HDT results were announced in February, four have either recently adopted a local plan or progressed it to an advanced stage. This means that their housing need figures and housing delivery test results are about to be superseded, which arguably means that the action plan sanction no longer applies.

Of the remaining 21 authorities, two told Planning that they expect to produce an action plan later in the year, coinciding with the publication of local plan documents. Nine told us that they are drafting or finalising the action plan, and that it will be published soon. Eight had not responded to Planning’s inquiries, and we had not been able by 7 October 2019 to locate the action plan on their website. Since the HDT sanctions were announced, two of the councils have been reorganised into Dorset Council, which had not confirmed at the time of writing whether it had produced an action plan.

Some consultants are unimpressed that the number of councils that haven’t yet published an action plan is this high. "It’s disappointing given the emphasis the government has placed on this," says Matthew Good, director at Pegasus Group.

The Local Government Association’s Planning Advisory Service carried out action plan training sessions with local authorities last year. The organisation’s programme manager Richard Crawley attributes the numbers yet to publish a plan to the complexities of gaining political sign-off and the fact that the plan deadline fell in the holiday period.

But some councils may also have decided not to produce a plan, he adds. "Inevitably there will be some places who say these plans are not relevant for us, and we are not going to do one," he says.

It is noteworthy that the government has not spelt out any direct consequences of failing to publish an action plan. "The view of the government is that the action plan is not a punishment or homework but something that councils should be doing for their own benefit," says Crawley. But it will be difficult for councils to appear at an appeal without an action plan and "be able to argue that their plan is up-to-date and working", he suggests. "That is the implied sanction," he says.

Andrew Jackson, head of development economics at consultancy Boyer, agrees that the absence of an action plan could be seen by appellents and inspectors at appeals as "sign of a lack of engagement and commitment on housing delivery."

Planning has reviewed the contents of action plans prepared by authorities shown by the HDT to have delivered fewer than 85 per cent of their target number of homes over the previous three years. These authorities are under additional pressure to quickly find additional housing sites, as their HDT under-performance means they are required to add a 20 per cent buffer to their supply of sites for new homes, over and above the five years worth of sites that every authority is obliged to demonstrate. The review has uncovered some widely-identified causes of under-delivery, as well a range of proposed remedies, some widely employed, others being used by a handful of authorities. A key task of the action plans is to identify the causes of under-delivery in their areas. Among the 67 plans we reviewed, the most commonly cited causes of under-delivery are:

The problem of limited availability of sites encompasses a range of issues cited by different authorities. For some, for instance those suffering from tight boundaries, it is caused by their geographical nature. Others cite a lack of large development sites, a heavy reliance on brownfield sites or a shortage of greenfield sites.

Many of the plans also cite stalled or delayed sites, where allocated sites have not come to fruition, or where permissions have not been implemented, as a cause of under-delivery. Examples cited include where there have been complex legal or land ownership issues preventing sites from progressing, or ground conditions mean there is a need for decontamination work.

Action plans also point to macroeconomic causes. A range of factors associated with the housing market are cited by councils as causes of under-delivery, including developers’ difficulty in obtaining development finance, or the absence in the area of certain sizes or types of private or public sector developer. Developer/landowner behaviour is identified by some councils as a problem, with a small number specifically citing landbanking as a factor.

Complaints about a lack of particular site sizes or developers of particular profile highlight the need for authorities to offer a good mix of sites, says Good. "Most local authorities should look for a good mix across the board, and across different markets, rather than throwing all their eggs into one basket," he says.

The lack of an up-to-date local plan or slow decision-making on applications are not commonly cited in the action plans as factors holding up housing delivery. But some parts of the planning process are identified as sources of delay. These include in particular the discharge of conditions and the time taken to negotiate and sign-off section 106 agreements.

These findings chime with the experience of practitioners. "It can take a remarkably long time to get sign-off for section 106s," says Jackson. 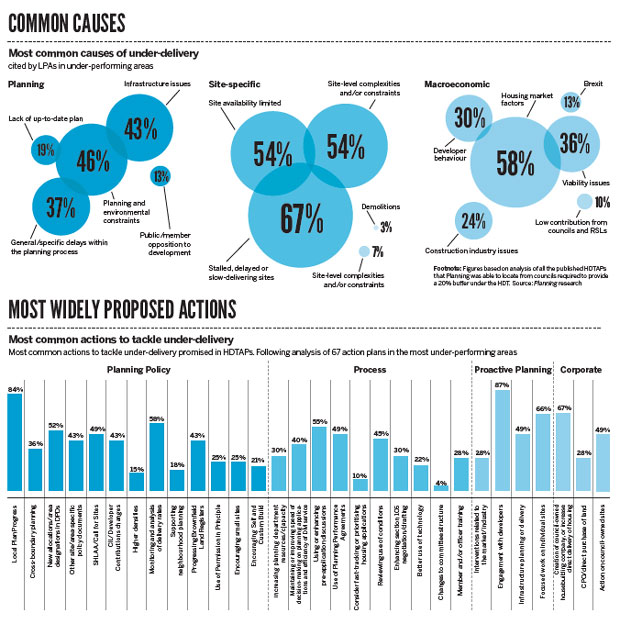 ACTIONS BEING TAKEN TO TACKLE UNDER-DELIVERY

Almost all of the action plans reviewed identify local plans as a key mechanism for addressing underdelivery. Some commentators argue that this is so obvious a solution as to be not worth including. "Local plans are what councils have to do anyway so why would it be an action point," asks Jackson.

Nevertheless, many of the action plans commit not only to progressing local plans, but to taking forward either specific site allocations or sitespecific policy documents such as development briefs. Such commitments are crucial, says Michael Knott, director at consultancy Barton Willmore. "The action plan needs to provide detail which gives a clear indication that the five-year land supply is a priority issue for that local plan," he says. It is key that the sites coming forward in the local plan are realistically deliverable, and will start delivering housing early in the plan period, he says.

Crawley agrees that a realistic assessment of how quickly sites can bear fruit is critical. He says some local plans have been subject to "a conspiracy of optimism", which sees councils over-estimating the chances of key site allocations in the local plan delivering promptly, and then falling foul of the HDT when the allocations don’t bear fruit.

Just under half of the action plans cite brownfield land registers as a part of the solution to boosting delivery. Some specifically state that they will consider granting planning permission in principle to sites in part 2 of their registers to bring forward housing sites. "If that is something that flows from action plans, then that’s a positive," says Jackson.

A range of other suggested improvements to the planning process are identified in the action plans. Many highlight the potential for a good quality pre-application discussion service and the use of planning performance agreements to enable faster delivery of key sites. Some identify enhancing their team’s approach to development management as a spur to action. In order to smooth the roadblocks in the process related to conditions and section 106 agreements, several action plans state the authority will review its standard conditions list, simplify the discharge of conditions or even aim to reduce the use of planning conditions. On section 106 agreements, the use of standard templates and proformas are identified by some of the action plans as potential ways to assist the process.

Some of the action plans also identify the use of technology as a way of improving the efficiency of the service, with the digital project management platform Uniform Enterprise specified by two plans, and improved databases of assets and sites highlighted by others.

Improving engagement and communication with developers is identified in many of the action plans as a way of improving delivery. Suggested strategies for doing this include liaison on key sites to identify roadblocks, and the creation of developer or agent forums that meet regularly to discuss delivery issues in the area. In many instances, such forums are already well-established.

A wide range of actions are identified that would normally be seen as corporate activities, rather than falling within the remit of the planning department alone. Chief among the corporate actions is a commitment in many of the action plans for the authority to get more involved in direct delivery of housing. In many cases this is through the use of a housing company, but there are also commitments to setting up joint ventures, and even a willingness to use compulsory purchase orders in some cases.

These actions reflect the message given at the pilot seminars, reports Stephen Hill, director of the consultancy Hyas Associates, which assisted PAS with the pilot work on action plans last year. "The action plans should be used as an opportunity to get a focus corporately on prioritising increased delivery," he says.

Some commentators say the action plans published so far are revealing for what they don’t say. Good argues that local authorities should consider making their policies more flexible, for example by being "a bit more relaxed" on settlement boundaries in order to enable a bigger pool of development land.

Knott says it is notable that the plans don’t make more of a commitment to securing increased resources for planning departments. He argues that resourcing development management teams to speed up determination times and manage increased casework could play an important part in boosting delivery. "I find it surprising that it is not being indicated as a route for improving performance," Knott says.

Jackson argues that one of the main obstacles to housing delivery is political opposition. The review shows that, whilst some authorities commit in the action plan to member training to help improve the planning decision-making process, just a small number of plans highlighted political or public sensitivity or opposition to development.

"The local political angle is one of the biggest blocks on the delivery of development, and I think the action plans probably miss that point," Jackson says. "I don’t have the answer to it, but flagging it up as an issue and starting to have a conversation about it is important."

Overall, observers have differing views of the effectiveness of the action plans. Jackson argues that the first batch are "rather generic" but that they are likely to become stronger over time and become useful tools for unlocking housing sites. For Crawley, the ultimate test of an action plan is whether it causes something to be done by stakeholders "that wouldn’t otherwise have been done".

WHAT EACH COUNCIL IS DOING 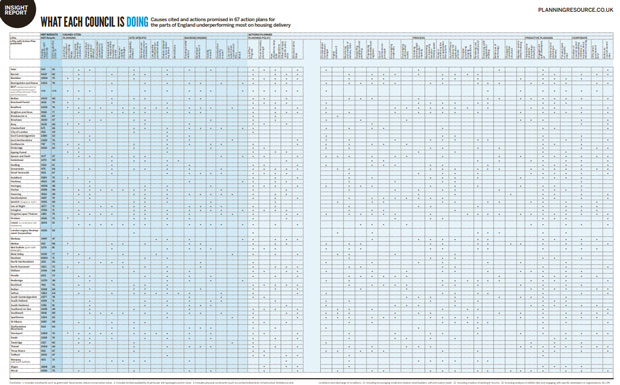