Earlier this month, housing minister Esther McVey wrote a letter to Milan Radulovic, the leader of Broxtowe Borough Council in Nottinghamshire, which was subsequently published by the Ministry of Housing, Communities and Local Government (MHCLG). The letter comments on the emerging Broxtowe Part 2 local plan, which proposes to remove several parcels of land from the green belt and allocates them for future development. This includes 153 hectares at Toton, where a new High Speed Two station is planned, for up to 800 homes, plus sites at Awsworth, Brinsley, Kimberley, Bramcote and Stapleford.

Inspector Helen Hockenhull’s final report was published last week. It found the plan sound, subject to proposed modifications, and said the green belt releases were justified due to "exceptional circumstances". These include the local need for housing, a lack of alternatives and the "limited impact" on the openness and purposes of the green belt.

McVey’s letter to the council said: "I would like to take this opportunity to remind you of the importance this government attaches to maximising the potential of previously developed land for new development…to meet housing need." The letter sought "further reassurance that the council will make every possible effort to prioritise redevelopment on previously developed land", and called on Broxtowe to engage with MHCLG officials to address challenges in bringing forward brownfield sites. Her letter raised "matters that are likely to be applicable to other local authorities", she added.

Broxtowe council declined Planning’s request for an interview and said its full council would discuss the inspector's report at a meeting that was due to take place on Wednesday (October 16).

The letter is not an intervention, and the council has no legal obligation to do anything other than adopt the plan, said Christopher Young QC, planning barrister at No5 Chambers. However, the move is "a warning shot for all local authorities", according to Catriona Riddell, strategic planning specialist at the Planning Officers’ Society. "There is a concern [among ministers] that green belt land is seen as the easier option in helping to deliver housing, and that local authorities are not maximising the potential from brownfield sites first," said Riddell.

Before publication of the National Planning Policy Framework (NPPF), she said, councils saw green belt as "sacrosanct", and put huge efforts into developing brownfield sites. But since then, she said, there has been a significant increase in housing delivery targets, particularly under the government's new standard method of assessing housing need, which has put pressure on green belt areas. "It is inevitable that some councils look to release such land, though it potentially weakens the status," she said

The latest MHCLG figures on land use change, however, indicate no sharp increase in green belt development in recent years (see chart below). The proportion of land changing to residential use across England that is in the green belt has remained fairly constant in the last five years, and fell in 2017/18 to 8 per cent from 9 per cent the previous year. Meanwhile, the proportion of such land that is brownfield fell from 44 per cent in 2016/17 to 32 per cent in in 2017/18 but is at a similar level to preceding years.

Ministers do have the power to intervene in local plans, and question the proposed release of green belt sites as they did for Birmingham City Council's development plan in 2016, causing delays in its adoption, noted Young. "McVey’s letter shows that the government does not want to intervene in the plan and slow it down, but at the same time it wants to re-iterate the message that local authorities should sweat their brownfield assets to minimise take-up of green belt land," he said.

She may also be hinting that the government has money to help facilitate the delivery of brownfield sites, he said. Broxtowe’s plan does not detail specific challenges, but brownfield development in general can be costly due to contamination or other risks, which impacts financial viability.

The Broxtowe story highlights the shortage of available brownfield land to meet housing need in some areas, experts said, and the fact that green belt review is therefore sometimes necessary. "As is provided for in the planning rulebook, alterations to green belt boundaries are sometimes appropriate and necessary to facilitate good, sustainable development," said Sarah Smith, planning partner at consultancy Rapleys. McVey’s letter, however, "may indicate a hardening of the government’s stance in any future green belt policy decisions".

Other commentators disagreed that this indicated any change in stance. "McVey has expressed strong support for maintaining green belt protections since taking up her post, so [her letter] may simply be a further manifestation of this," said Adam Nicholls, planning lead at the District Councils Network. Given the government’s "re-affirmed intention to deliver 300,000 homes per year by the mid-2020s", and the continued requirement for councils to show a five-year housing land supply, "few emerging local plans are proactively holding back greenfield housing allocations," he added.

Re-allocation of green belt sites is not a decision any council takes lightly because it is controversial and heavily scrutinised, said Nicholls. "If councils could meet all their housing need through deliverable brownfield sites, they almost certainly would." But in Broxtowe’s case, the inspector was satisfied the approach was appropriate and justified, he said.

"For planners, this is probably the key takeaway - that the release of greenbelt, while the ‘last resort’, is a valid opinion supported in national policy," said Richard Pestell, planning director at consultancy Peter Brett Associates. The letter is "a product of the conflict in policy and politics", whereby the government requires councils to release new land for housing, even if that is not the message it would like to advertise, he added. "I would suggest the letter’s intended audience is not planners but the wider public, which may seek greater reassurance on green belt protections."

The minister speaks at the Planning for Housing conference, organised by Planning, in London on 12 November. For more details of the event, click here 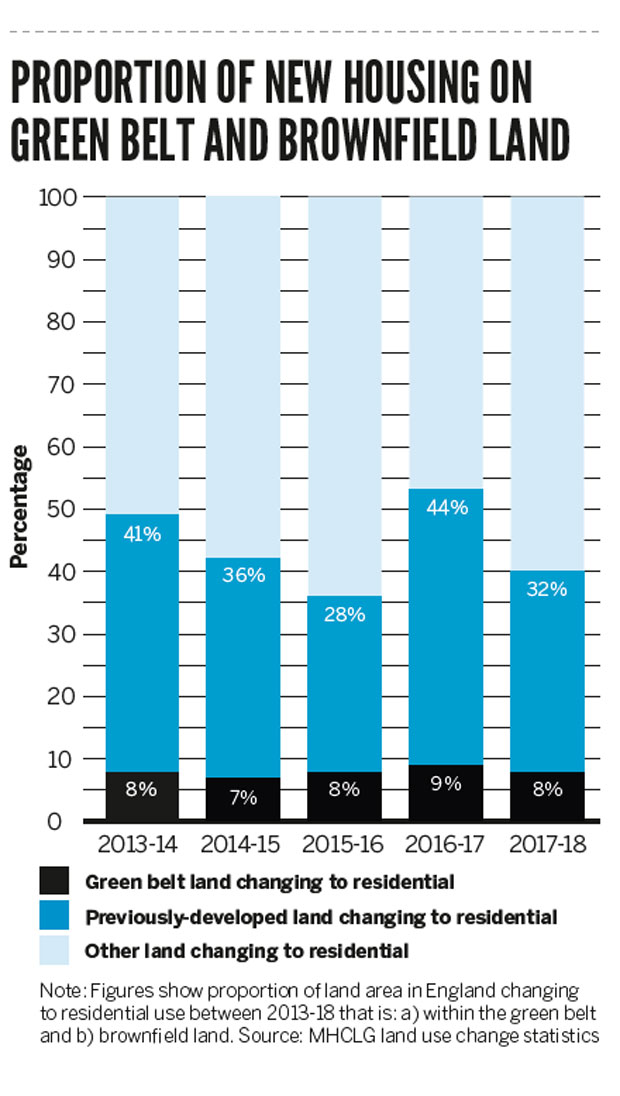