Victoria Potts, planning policy manager at East Hampshire District Council, explains how the consultation findings were received by officers. "We took a step back and thought, we need to go out to the public and to statutory consultees and put all the options on the table," she says.

Time, however, was an issue. A decision to launch a new consultation was taken in June – one month after the council’s existing local plan turned five years old. Local plans now have to be reviewed every five years and the consultation was seen by the local authority as a key part of the review process. As a result, the process needed to be quick and cost-effective. Potts recalls thinking: "How can we do this in terms of the timescale but also budget, because this is an additional consultation that we hadn’t planned for at the outset?"

When officers considered the various kinds of questions typically posed by local residents, they developed an unusual solution. In partnership with site promoters, they delivered a total of six consultation events for residents, preceded by a private briefing for councillors. Normally, councils act as intermediaries and promoters are not directly involved. "The public want to engage in the detail of what is being proposed on site," says Potts. "So, we thought it would be really helpful to have the site promoters on board to present their sites and explain their vision, what work they had done, what stage they are at and also to hear the views of local people."

The promoters of ten large sites were invited to come on board. Troy Hayes, managing director at Troy Planning, who represents one of the site promotion teams, says: "From our perspective, it was great. We had an opportunity to explain the merits and constraints of our site with elected members and the public."

Promoters were issued with a template to follow when producing materials for the consultation process, including details of what could and could not be submitted. "The feeling was that this was going to be a level playing field going forward – that all the site promoters would have to follow a certain set of rules," says Hayes. "That was a real positive."

"By involving the site promoters, there is a risk that it’s a free-for-all and it’s not run as a formal consultation, and we wouldn’t get what we needed," she says. Providing a clear set of rules for promoters to follow meant "being very specific about the number of banners and the information as well as making sure what was presented was what the public needed to see", she adds.

When promoters were invited to make their case to councillors, the process involved a similarly strict approach. For instance, each promoter only had ten minutes and was told that they were there to talk about their site only and not to compare it to any others. "We were very specific and made sure it wasn’t approached as a competition," says Potts.

The first public event was held in early September – three months after the decision was taken to launch the consultation. Nearly 200 people attended and were able to access detailed information about the ten potential sites.

Potts believes that getting the site promoters involved helped to improve the standard of consultation that could be achieved in a three-month period and also saved the council money. "There’s been a level of information produced by the site promotion teams we could never have produced as a council," she says. "We haven’t quantified the [savings], but it’s certainly thousands of pounds."

Hayes says this approach to consultation has been equally valuable from a site promoter’s perspective. "It’s definitely good for relationship building with the local authority, with local people, and it does make things a little more accountable," he says.

It also helped to provide promoters with an insight into the local plan production process, he adds. "It’s not typical to be in the same room as nine other site promoters," says Hayes. "It helps site promoters have a slightly more objective view of the decision that local authority members and officers have to take."

By the end of the year, East Hampshire District Council intends to decide which sites will be included in its revised local plan. Whatever happens, Hayes sees value in the process. "Obviously we’d hope to be selected," he says. "But the important thing for us to know is that the consultation has been thorough and everyone has had the opportunity to put their best foot forward."

Click on the map below to view a larger version. 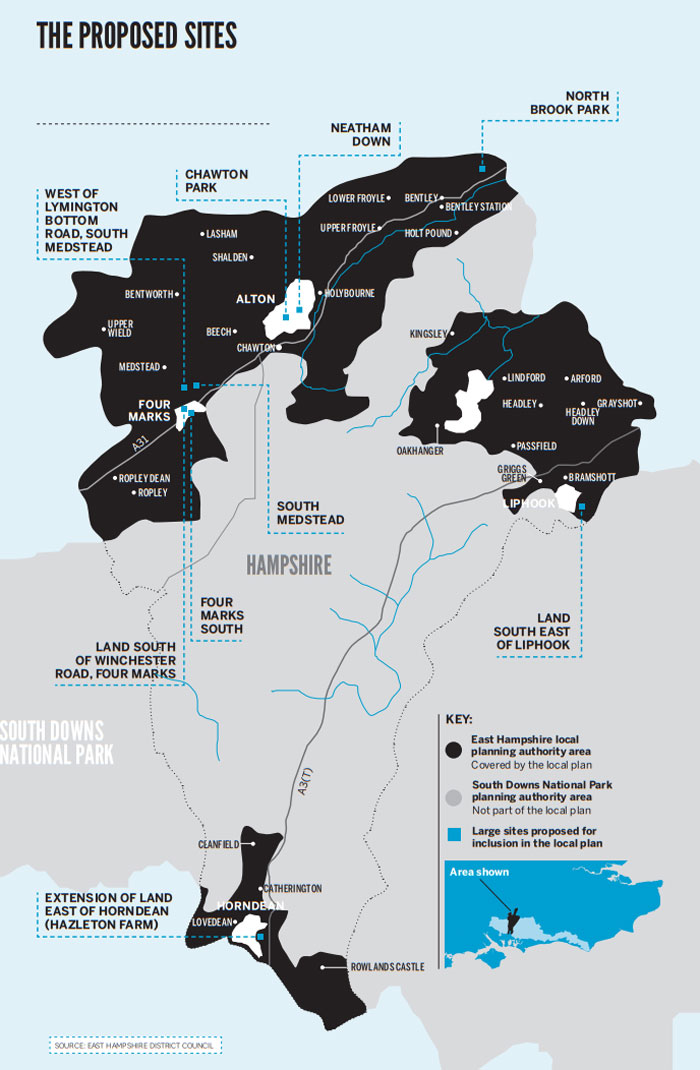