The data highlights generally high levels of approval for prior notification applications for office-to-residential conversions, with 79 per cent having been approved overall.

Practitioners say it is difficult to draw conclusions from these figures, as the context of site characteristics varies between and within council areas. "A lot of this will depend on the sites," says Richards. "There are quite a lot of sites where they are probably ticking every box and there is no way they can be refused."

The ten authorities with the highest numbers of prior approval applications are all London boroughs, with Richmond-upon-Thames leading the way with 329, closely followed by Hammersmith and Fulham at 325. Behind these, Barnet, Lambeth, Wandsworth, Hounslow, Bromley, Ealing and Croydon have all had over 200 prior approval applications. The authority with the highest number outside the capital is Bristol with 196. Other councils outside London with 140 or more applications received are Dacorum, Southend-on-Sea, Birmingham, Reading, Brighton and Hove, Wycombe and Leeds.

At the other end of the scale, the statistics show that, so far, seven councils have received no prior approval applications for these schemes - Barrow-in- Furness, Copeland, Mansfield, Weymouth & Portland, City of London (one of the areas originally excluded from the PD right), Isles of Scilly and Redcar & Cleveland. Dartmoor National Park, North York Moors National Park and the Ebbsfleet Development Corporation also fall into this category.

The figures indicate that, generally, urban authorities in the south are most likely to be hotbeds for office-to-residential conversion activity, except where they are in heavily constrained areas, such as areas with Article 4 directions in place removing such permitted development rights.

This is likely to be explained by the supply of qualifying buildings and the residential values that would make them attractive prospects for conversion, Nedin says. Bainbridge adds that access to good public transport is "a key driver", particularly when the public transport provides good links to London. 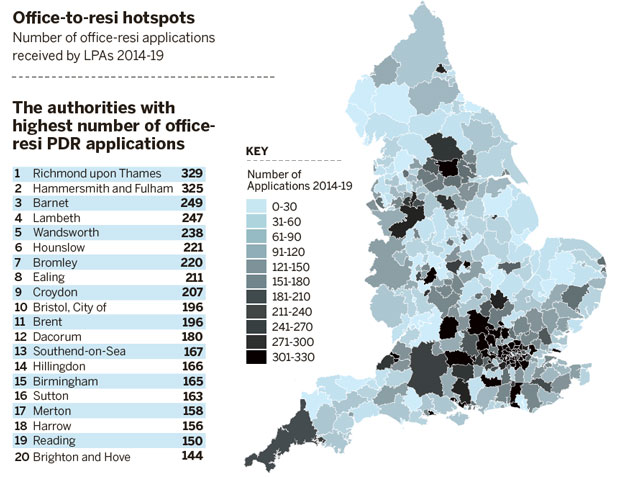 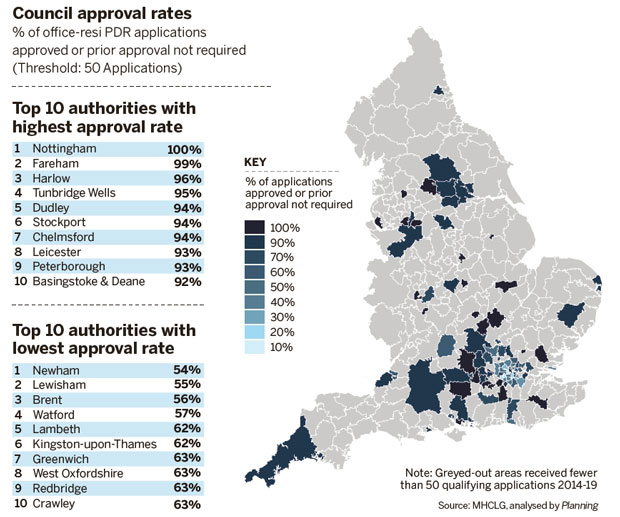