Legal and environmental campaign group ClientEarth has so far won three cases against the UK government over the country’s air pollution levels, forcing ministers to draw up new plans for reducing nitrogen dioxide to within legal limits. Earlier this month, it shifted its focus to local government.

ClientEarth sent letters to 105 councils in the process of preparing or reviewing their local plans, threatening them with legal action if their strategies do not include "evidence-based carbon reduction targets". It invited the authorities to "put your area on a credible path to achieving net zero emissions by setting robust carbon reduction targets and integrating them throughout your local plan". 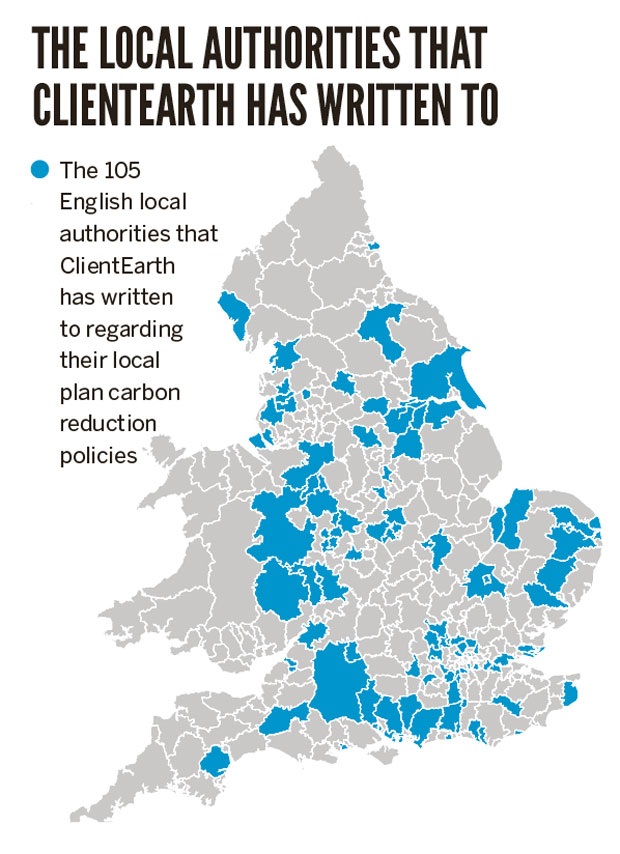 The letter stated that "local plans are required by planning and environmental legislation to contribute proactively to meeting national and international climate commitments particularly through the Planning and Compulsory Purchase Act 2004 and the Climate Change Act". Any plan "that fails to demonstrate consistency with robust local targets will be unlawful and at risk of legal challenge", it warned.

According to ClientEarth lawyer Sam Hunter Jones: "We have given the authorities eight weeks to explain how they are seeking to achieve carbon reduction targets. As they are all at different stages in preparing their plans, their responses will differ."

One of the authorities in the firing line is Preston City Council in Lancashire. Chris Blackburn, its planning policy team leader, said the "threat has helped to alert the council corporately to the importance of addressing climate change through the planning process". The council is working with three neighbouring authorities on a joint local plan due for completion by the end of 2022.

Mark Dickens, lead planner at Liverpool City Region Combined Authority, said it is looking to work with ClientEarth to clarify the campaign group’s objectives. "We want to develop an evidence-based approach in the preparation of the city region’s first plan," he said.

Colin Morrison, head of sustainability at consultants Turley, said some councils lack clear local plan policies to secure housing with a low environmental impact. "There is clear scope for doing that," he said. Hunter Jones, however, said ClientEarth is concerned not just with planned homes’ design and construction but also with how a plan’s site allocations could contribute to achieving carbon reduction targets. To illustrate how site allocations can fall foul of environmental laws, Lisa Foster, partner at environmental law firm Richard Buxton Lawyers, said: "We have several clients who are contesting site allocations because they won’t encourage sustainable lifestyles. The public transport proposals are in many instances poor."

Lewes District Council in East Sussex, another authority to have been sent the letter, is reviewing its draft site allocations plan, said Emily O’Brien, the Green Party cabinet member for planning. It "could be difficult", she said, for the authority to achieve its homes requirement as set by the government’s new standard housing need method by only supporting development on the most sustainable sites.

Environmental consultants said councils trying to meet ClientEarth’s objectives in their plans are likely to face challenges. "Inspectors will be concerned that the issues of viability and deliverability are addressed in the allocation of housing sites, which could be affected by sustainability measures," said Mark Fessey, associate at consultantcy Aecom. "There may have to be some compromise and a range of sites chosen. This should be made clear in any plan."