Last October, planning minister Kit Malthouse told the Conservative Party conference that encouraging groups of local authorities to come together on a "subregional" or county level to prepare joint plans was a key part of his mission to tackle the housing crisis. Some authorities are ahead of the curve, with five areas drawing up cross-boundary strategic plans on a sub-regional scale: the West of England, Greater Exeter, South Essex, Oxfordshire and South West Hertfordshire (see map, opposite).

Many areas of the country have produced joint local plans, which predate the National Planning Policy Framework (NPPF) and make use of powers introduced by section 28 of the Town and Country Planning Act 2004. However, it is only in the past couple of years that authorities, using the same legal powers, have started to prepare such strategies on a larger scale.

Catriona Riddell, strategic planning specialist at the Planning Officers Society, which represents public sector planners, points out that joint local plans have tended to involve just two or three authorities. In contrast, joint strategic plans (JSPs) cover much wider areas and sit above their constituent authorities’ local plans. They deal with high-level strategic issues, such as how much growth is needed and where, and the supporting infrastructure required. JSPs are "focused" with relatively few policies, Riddell says, whereas joint local plans are detailed documents that set out site allocations – something the JSPs so far have tended to avoid.

According to Riddell, the five areas concerned have concluded that such strategies are essential after realising that the duty to cooperate set out by the 2011 Localism Act was an insufficient mechanism to support the high levels of growth they are required to deliver. "Under the NPPF, these authorities are having to deliver a lot more housing than before," she says. But all the areas are "very constrained", she adds, particularly by green belt, and need to work in a collaborative way and "look at things on a bigger scale".

The most advanced JSP is in the West of England, where the four authorities’ plan is undergoing an examination in public and already facing tough questions from the inspectors (see panel overleaf). Riddell says this highlights a key problem facing these new-style joint plans. "PINS struggles to examine them because they’re not like normal local plans," she says. "They’re more visionary, they look further forward and they don’t have the level of certainty." While the NPPF requires plan proposals to demonstrate a degree of deliverability and certainty before being found sound, the longer-term JSPs struggle to meet these criteria, she says, adding: "The testing process isn’t fit for purpose."

At the other end of the spectrum from the West of England, the South West Hertfordshire JSP is just getting started. It is being led by project director Chris Outtersides, who says the plan is "at the embryonic stage", adding: "The JSP is a recognition that to deliver housing numbers and infrastructure on a district by district basis is becoming really hard to do. For us in South West Herts to have a grown-up conversation with government about infrastructure funding, you need to be working with your next door neighbours."

Outtersides says he has spent the past six months working on a budget and programme for the project, as well as with senior officers and elected members at the authorities involved to secure buyin. "One of the first things we need to produce is a comms and engagement strategy based on the lessons learned from JSPs elsewhere," he says. "It’s a very delicate process and we need to bring everyone on board at the start of the journey."

In addition, South West Hertfordshire is tendering for consultants to deliver two key pieces of evidence: a strategic growth locations strategy and a multi-modal transport study. Outtersides says: "We will then work with the consultants to come up with the growth options in the next six to nine months. We will take those options back to the authorities and work with the politicians across the partnership to go forward from there through a more formal public consultation process."

According to Richard Butler, an associate at consultancy Bidwells, the critical issue is how the JSP will work with the various local plans in the area. He supports what he sees as the JSP’s approach of bringing forward infrastructure and thus supporting the later stages of the local plans, many of which include higher housing delivery targets than earlier stages of the plan.

The JSP for South Essex, an area with high levels of green belt, is more advanced. The Association of South Essex Local Authorities (ASELA), a group of six district and unitary councils plus Essex County Council, began formal work on a joint plan last summer. It has since benefited from an £863,000 grant from the Ministry of Housing, Communities and Local Government’s Planning Delivery Fund, which it has used to commission research to support the emerging plan. "The evidence base is at various stages of production," says ASELA chair Rob Gledhill. A review is planned early next year to assess what further evidence may be required.

Oxfordshire also appears to be making steady progress, despite last May’s local elections raising some potential question marks. As part of the Oxfordshire housing and growth deal with government, the five Oxfordshire districts and the county council are committed to producing a JSP – the Oxfordshire Plan 2050. But a change of control at South Oxfordshire Council has seen its new administration threaten to withdraw its draft local plan from examination, a move that officers said would jeopardise the housing deal. Despite this, the county’s authorities say the JSP is still on course. The latest round of consultation, on strategic growth locations, closed in April and the authorities aim to submit the plan to the Planning Inspectorate by the end of March next year.

The path forward for the Greater Exeter JSP is less clear. The plan ran into difficulty in September last year when East Devon District Council refused to endorse the latest version of the document, delaying the consultation on the plan. Now, following the local elections in May and changes of control at some of the authorities, it seems the plan has stalled. "The local planning authorities are taking stock of the progress made on the Greater Exeter Strategic Plan," the authorities said in a statement. "This means that a review of the timetable is likely to be needed." Asked whether the authorities remained committed to the project, strategic plan team manager Simon Thornley declined to comment.

"I’ve heard nothing definitive, but if they don’t do it there is no easier option," says Simon Prescott, a partner at consultancy Barton Willmore’s Bristol office. "[Without it], how do you plan for unmet need and cross-boundary issues? You could point to the duty to cooperate, but we’ve seen authorities hitting the buffers with that. At least if you are preparing a joint plan you have a mechanism to do it."

The lack of an easier option explains why most commentators expect more areas to engage with the JSP process, though Riddell says that "a lot is resting on how the first five progress". "I think the scale of growth that government is asking districts for cannot be delivered within local authority boundaries," says Outtersides. "The infrastructure needed to deliver the housing and the employment mean that authorities have to come together to look at the bigger picture." 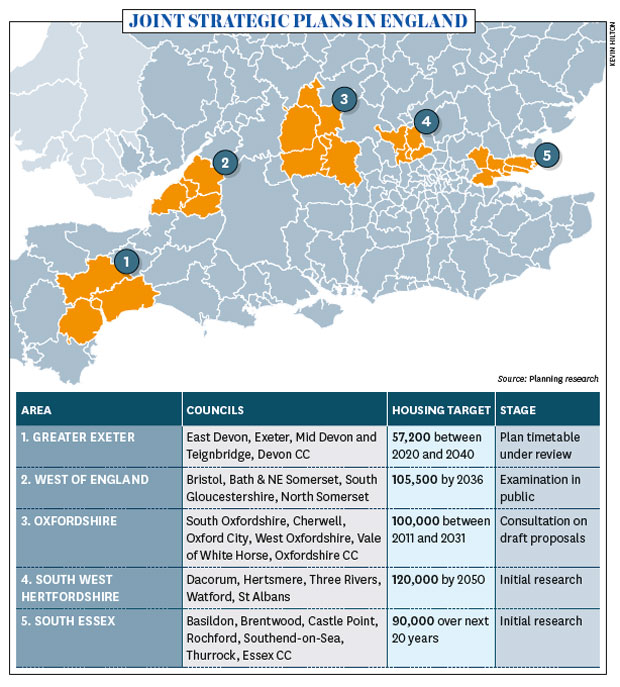 By far the most advanced Joint Strategic Plan (JSP) is to be found in the West of England, where Bath and North East Somerset, Bristol City, North Somerset, and South Gloucestershire councils are working together to adopt a plan. Catriona Riddell of the Planning Officers Society, which represents public sector planners, says the other four JSP areas are watching the West of England examination "closely" for lessons.

The examination in public (EiP) began at the start of July, with further sessions planned for September and October. A decision on the plan’s soundness is not expected, says the EiP website, until the end of the year. The EiP was delayed significantly after the examining inspectors raised a series of questions last autumn. These ranged from a request for more evidence of fulfilling the duty to cooperate to assessing the implications for protected habitats of the landmark April 2018 European Court of Justice decision in People Over Wind v Coillte Teoranta. As a result, the councils had to carry out a further consultation to address the issues.

The area’s need for a JSP stems from the fact that Bristol is experiencing sustained and strong population growth but cannot accommodate all the new housing required itself because the city region is surrounded by green belt. That is accepted by all parties, but how and where additional homes should be built is a contentious matter since neighbouring councils are reluctant to review green belt policy.

Katherine Evans, head of planning at TLT Solicitors in Bristol, says: "There is a political problem. Different authorities have different views on whether it is politically expedient to make releases."

As a result, commentators say that some suboptimal allocations have been made in the JSP. A proposed new 3,000-home garden village near Buckover is a case in point, Evans says. "It’s near the motorway and has no sustainable transport," she argues. "That’s pretty controversial in many respects but it’s been done to avoid making a green belt release, which is politically unacceptable."

Speaking off the record, one local planning consultant says he expects the planning inspectors to ask for some significant revisions. "This will allow members to go back to their constituents and say ‘Sorry chaps, this wasn’t our idea – we’ve been forced to do it this way’."

Simon Prescott, partner at consultancy Barton Willmore’s Bristol office, adds: "I suspect the inspectors are going to come up with an interim note that has some very clear challenges for the authorities. It will be for them to decide whether they are going to do that work and assist the inspectors in identifying modifications.

"I’m hoping the authorities engage positively so that we can keep this plan alive."

The West of England Combined Authority was approached for a reaction to the points raised by commentators but it did not respond.