Brownfield land registers are now in place across England. According to research by the Campaign to Protect Rural England (CPRE), registers have now been published by all 338 local planning authorities, identifying brownfield land with capacity for more than one million homes.

This marks progress. However, in addition to requiring councils to publish registers, the government encouraged them to identify sites to include on ‘part two’ of their registers, which grants them permission in principle (PiP). Introduced via the Housing and Planning Act 2016, PiP aims to offer developers a fast-track route through planning for housing-led schemes. It splits the permission process in two, allowing residential proposals to secure PiP first and achieve full consent later through a further technical details consent.

The brownfield registers themselves are split in two – all sites listed are included on part one but those identified on part two are automatically granted PiP. But CPRE found that just ten councils have proposed part-two sites – and only four have granted PiP. Planning spoke to these four about the process – and what the benefits might be. 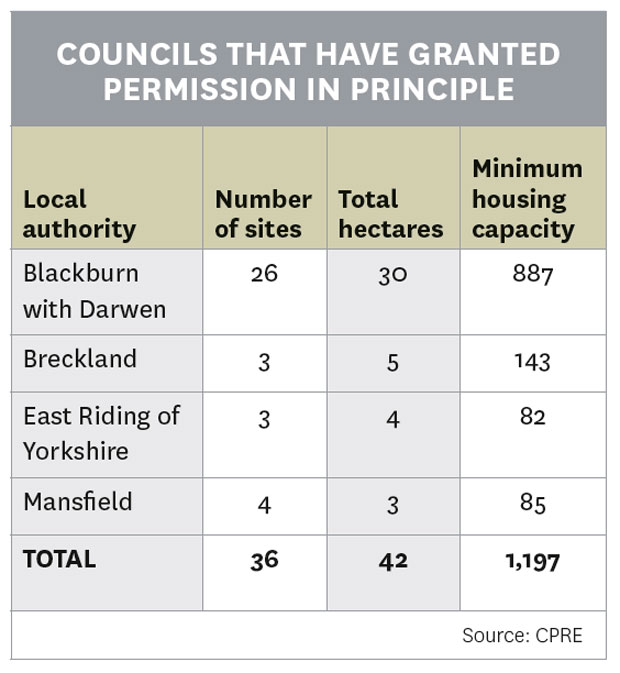 In December 2015, Blackburn with Darwen Council published the second part of its local plan, following a core strategy adopted almost five years earlier. It identified a series of site allocations and said: "We will work proactively with developers and landowners to bring forward development."

At around the same time, the government was encouraging councils to prepare brownfield land registers. Gavin Prescott, the council’s planning manager, says his authority spotted an opportunity to fulfil its local plan promise. "We felt if we did the initial work with PiP, it gives the developer a bit more encouragement and certainty that the site will be approved."

Planning officers got to work identifying sites to include on a register. The first stop was the council’s strategic housing land assessment, which formed part of the evidence base for the local plan. Development management officers also worked with colleagues in the growth team, which works with third parties to enable new schemes, to identify sites where PiP might kickstart development. Blackburn with Darwen’s register, published in December 2017, featured 33 sites, 26 of which were granted PiP, with capacity for 887 homes.

The process of granting PiP followed the guidelines in the government’s brownfield land register regulations, says Prescott, with consultation, notification and publicity procedures. The regulations do not stipulate how site allocation for PiP should be approved, and councils take different approaches. In Blackburn with Darwen, sites were approved by an executive member.

Since the register was published, Prescott says 22 of the 26 sites have "come forward and are at an advanced stage"; six have full permission for a total of more than 270 homes. PiP is helping the council meet its growth ambitions while optimising use of land, he says. "It’s about ensuring the right sites are available, not just on green fields but in urban areas."

East Riding of Yorkshire Council’s local plan commits it to delivering 1,400 homes a year between 2012 and 2029. But in its early years, annual completions were sitting below the 1,000 homes mark. Development control manager Stephen Cook says: "We could see there was a problem."

Then the government launched its brownfield land register pilot scheme. Cook says: "We identified permission in principle as something we could use to try to bring some of these sites forward."

A shortlist was drawn up of 17 brownfield sites. Each had been allocated for several years without development taking place. The list was reduced to three deemed suitable for PiP. "We didn’t want to use it on sites where things were already happening," says Cook. Others were too controversial. "You want sites residents will support," he warns. "If there is local opposition, it’ll be a difficult route to follow." The three sites have a combined capacity of at least 82 homes. Each was subject to a planning application process, says Cook, which proceeded like a normal application but was initiated by the council rather than a third party. "Because we were doing it from nothing, when we started we weren’t even sure if there was a standard permission in principle application form in place, so we ended up having to write our own," says Cook.

Changes to the council’s constitution and scheme of delegation were also required to allow officers to grant sites permission in principle. Technical details consent applications have not yet been submitted for any of the three sites. But the council’s housing completions are on the up and Cook says the brownfield register is emblematic of its efforts to encourage development.

Mansfield Council submitted its local plan for examination in December 2018. Martyn Saxton, head of planning and regeneration, says: "It was acknowledged that areas of greenfield land would likely need to be developed." Granting PiP on brownfield sites would show the council was doing what it could to deliver homes elsewhere. "It was important to make use of tools to help encourage reuse of vacant and derelict land," he says.

Potential sites were identified through the council’s housing and economic land availability assessment process, and those that met the brownfield register criteria were reviewed to see which would benefit from PiP. Four sites were identified with a minimum capacity of 85 homes. "These were assessed similarly to a traditional planning application," says Saxton. "Each site was then considered by the planning applications committee."

Saxton points to signs that PiP will soon be delivering homes. "One of the sites had a PiP for 25-30 dwellings but the subsequent application was for a greater number. The technical details consent needs to be within the range identified in the PiP, so they couldn’t use it, although it clearly gave guidance/support in bringing the site forward," he says. But he cautions that PiP is "a new approach that was unfamiliar to officers and councillors". He adds: "Training was put in place to ensure that everybody involved had a good understanding of the process and the decisions that were required."

Councils are accountable for housing delivery, so what should they do when planning permissions aren’t implemented? Breckland Council planning officers decided PiP might help. Strategic planning manager Phil Mileham says: "We identified sites with a potential reason to give a bit more certainty, such as a planning permission that might be lapsing, or one that might have lapsed in the past." The council’s brownfield register grants PiP on three sites, with a minimum capacity of 143 homes. Mileham says the register is being updated and the council is open to granting PiP on other sites in the future. "It’s kept under active review," he says.

WILL MORE COUNCILS GRANT PERMISSION IN PRINCIPLE VIA BROWNFIELD REGISTERS?

The research by the Campaign to Protect Rural England suggests that the percentage of councils taking the opportunity to grant permission in principle (PiP) via brownfield registers has inched above one per cent – just four local planning authorities out of 338.

Government guidance on PiP may explain this. On the normal planning application route, it says: "Developers will often have to expend significant time and cost prior to achieving certainty that any development will be able to go ahead in principle. Permission in principle offers an alternative route."

Commentators say PiP shifts this burden to councils, hence the latter’s lack of appetite for it. "It puts the onus on them to get the information to grant permission in principle – work normally done by a developer when putting in an application," CPRE planning campaigner Rebecca Pullinger says.

Greg Dickson, planning director at consultancy Barton Willmore, suggests councils have little incentive to do that work. "They have to consult with the landowner," he says. "If they know an application for a site is likely to come forward, why would they go down that route?"

Riëtte Oosthuizen, urban planning partner at consultancy HTA Design, agrees there is little incentive for councils to grant PiP on sites that are attractive for developers. And for more challenging sites, she asks: "Why should they go out of their way to grant permission in principle on sites that might have all sorts of issues?"