However, our analysis of CIL updates published by Planning suggest there has been a slowdown in the number of councils introducing the levy, with the number of charging schedules adopted falling from 16 in the 2017/18 financial year to ten in 2018/19. While the data is not completely comprehensive, it may indicate wider trends around uptake of the levy among local authorities.

The figures also show a regional shift year-onyear. In 2017/18, more than 80 per cent of the councils adopting charging schedules were located in the East or West Midlands or South East. Last year, the South West dominated the figures, providing six out of the ten schedules adopted.

In London, the only CIL schedule adopted in 2019/19 was the pancity Mayoral Community Infrastructure Levy 2 (MCIL2), designed to raise money for the Crossrail 2 railway line. MCIL2 replaced an existing mayoral CIL, introduced in 2012, and brought in charges of up to £80 per square metre for new housing developments, an increase of 60 per cent on the highest previous rate. 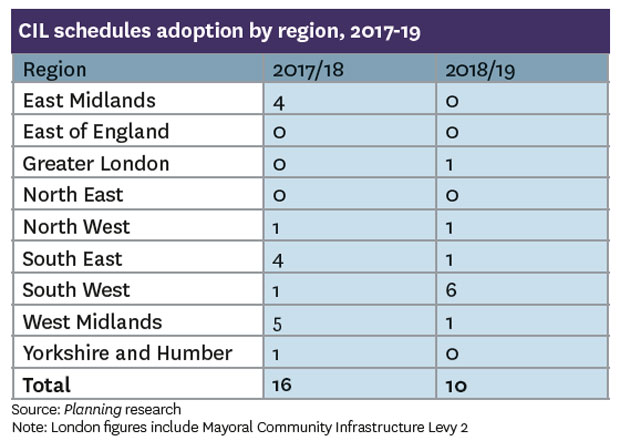 Buckinghamshire: Wycombe District Council has reviewed its CIL charging schedule to take account of inflation. The new charges took effect from 1 April and include a rate of £289 per square metre for large-scale retail.

Kent: Canterbury City Council submitted its draft CIL charging schedule for examination on 12 April. The schedule proposes rates of up to £187 per square metre for residential development.

Northamptonshire: Northampton Borough Council has published its local plan for a consultation running from 1 May to 14 June. The plan proposes delivery of 18,870 new homes between 2011 and 2029.

Cumbria: Barrow-in-Furness Borough Council’s local plan was found sound by a planning inspector on 20 March. The council aims to adopt the plan at a meeting on 4 June.

Essex: Basildon District Council submitted its local plan for examination on 28 March. The plan identifies sites for just under 18,000 new homes between 2014 and 2034.