This year’s survey has seen some substantial change in the top-rated barristers. Martin Kingston QC of No5 Chambers has taken the top spot, nudging out Christopher Katkowski QC, who moves into second place. In third place is Rupert Warren QC from Landmark Chambers, who last year shared second place with Kingston. Christopher Young QC from No5 Chambers and James Maurici QC share fourth spot. Maurici returns to the top five after a brief absence, while Young’s leap from tenth place to fourth is all the more notable for the fact that he only became a QC a little over a year ago.

There have also been some notable climbers outside the top five. Landmark Chambers’ Sasha White QC continues to rise up the table, from 16th in 2017 to joint seventh in 2018 and now sixth this year. Prominent recent cases include representing developer Lifecare in its appeal inquiry bid to overturn refusal of a Hampstead retirement village, as well as representing housebuilder Bellway in its successful bid to overturn the refusal of 150 Beckenham flats at an inquiry. "Sasha is absolutely unflappable, and has a great skill at rising above the dry detail to present arguments that set the big picture reasons for why planning permission should be granted on appeal," says one solicitor.

Morag Ellis QC from Francis Taylor Building has also risen up the ranking this year,from tenth to seventh place. In the last year, Ellis appeared for the Welsh Government at a year-long inquiry into a proposed new motorway around Newport. The controversial scheme is seen as a test case for new environmental legislation. According to one solicitor who has worked with her: "Morag is an excellent advocate and has a good eye as to what is important." 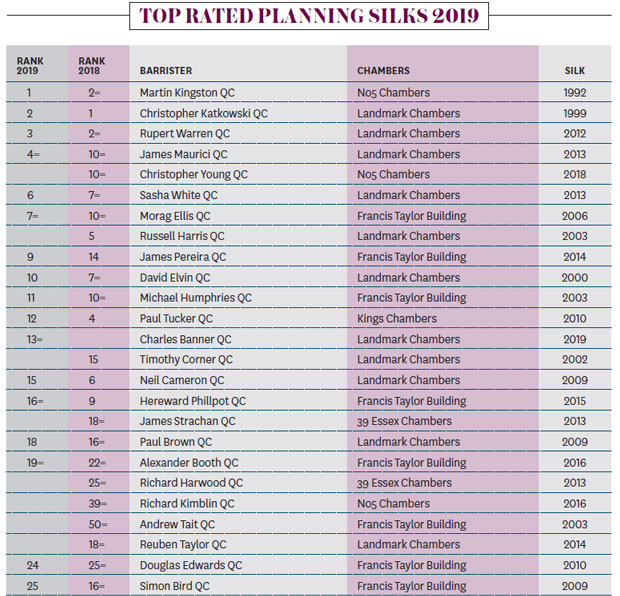 Returning to the top ten this year is James Pereira QC, also from Francis Taylor Building, who has risen from 14th in 2018 to ninth. In the last 12 months, Pereira has promoted some notable compulsory purchase orders (CPOs) relating to proposed urban regeneration schemes, including the Brentford High Street CPO and the Thamesmead estate regeneration CPO."He is focused on finding practical solutions to complex issues," notes one solicitor, while another adds: "He’s extremely clever, with a calm and authoritative manner."

Elsewhere, Andrew Tait QC from Francis Taylor Building has moved up from joint 50th last year to 19th, and is described by one solicitor as a "reliable pair of hands who gives very practical advice". Richard Kimblin QC from No5 Chambers has also rocketed up, from 39th to 19th. "I rate him chiefly because he is straight to the point in conference, so that the bulk of the time can be spent on the contentious issues," says one commentator.

Three newly appointed QCs – Charles Banner (13=), Giles Cannock (38=) and Robert Walton (38=) – feature in the silks table. Their official appointments occurred after the survey closed in February, but survey respondents who had voted for them as juniors, and who had not already cast their full allocation of votes for QCs, were asked if they wished to vote for them as QCs.

This year’s ranking of the highest-rated juniors is also full of rising names. Taking the top spot is Richard Turney of Landmark Chambers, who was in joint fifth place last year alongside Francis Taylor Building’s Rebecca Clutten. This year, Clutten takes second place. In joint third position are Melissa Murphy from Francis Taylor Building and Zack Simons from Landmark Chambers, both of whom have shot up the rankings in the last year – from joint 21st and 17th respectively. 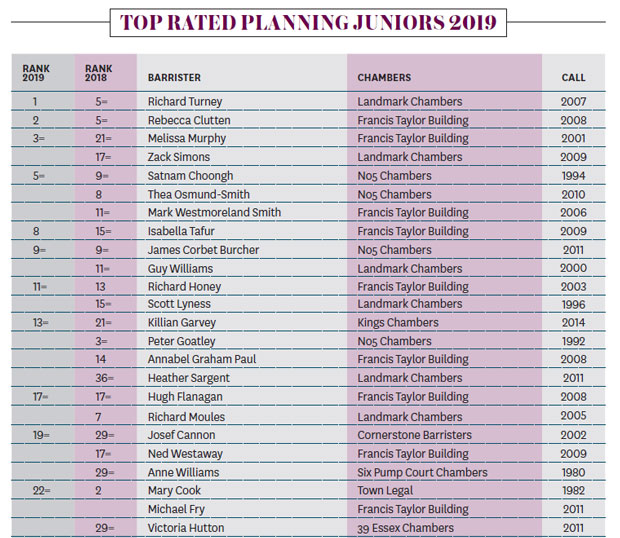 Outside the top five, Francis Taylor Building’s Mark Westmoreland Smith moved into the top ten this year, from 11th place to joint fifth. He is currently promoting HS2 phase 2A, as well as the International Advanced Manufacturing Park (IAMP) in Sunderland through the DCO process. He successfully defeated a landowner’s challenge to Sunderland City Council and South Tyneside Council’s joint area action plan, which forms part of the councils’ development plan policies for the area of the proposals. One solicitor describes him as "clever, level-headed and calm under pressure".

Elsewhere, Isabella Tafur, also from Francis Taylor Building, has moved up from joint 15th in 2018 to eighth this year. Tafur is acting for Welsh ministers in defending linked challenges to an enforcement notice and refusal of planning permission for a Gypsy and traveller site in a flood plain of the River Usk near Newport, among other cases.

Heather Sargent from Landmark Chambers has moved up from 36th to 13th equal. Working under the leadership of Rupert Warren QC, she is currently defending two High Court challenges to the government’s revised National Planning Policy Framework, as well as four High Court challenges to the government’s Airports National Policy Statement, led by James Maurici QC. "She’s had a busy year both in terms of court work but also inquiries," says one solicitor."She has an incisive and unstuffy approach."

Another riser among the juniors is Killian Garvey from Kings Chambers, who has moved up from 21st to 13th equal place. He recently secured permission at appeal for an employment/retail development on a contentious 4.15-hectare site in Cheltenham. "He is an exceptional advocate: sharp, tactically astute and he has an unrivalled ability to think outside of the box," says one solicitor.

Survey respondents were separately asked to vote for barristers or advocates aged under 35 whose progress had impressed them in the past year. This category was topped by Rebecca Clutten, with Heather Sargent in second place and Thea Osmund-Smith of No5 Chambers in third. 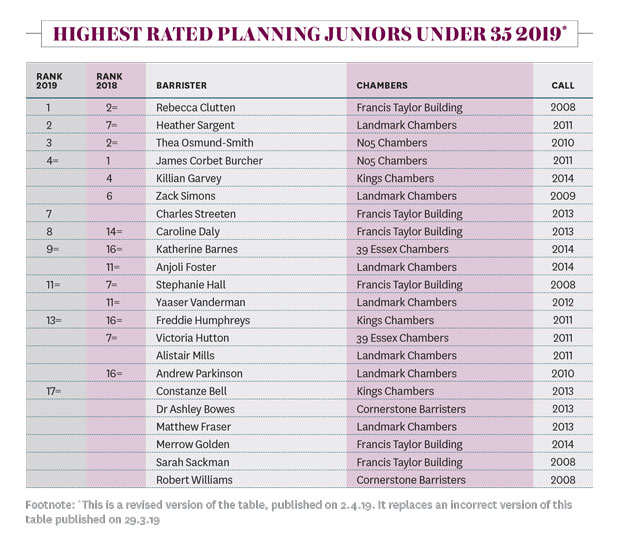 Over the past 12 months, Kingston has been involved in major infrastructure projects including promoting the Heathrow Hub, representing the local authority with regards to Wylfa Nuclear Power Station and representing landowner interests at Manston Airfield, as well as major High Court litigation. According to one solicitor: "He is the doyen of the planning bar. For every scheme with which he is involved, he combines an unrivalled strategic steer with a masterful grip of the detail." Another adds: "Every time you see him in action, it is a masterclass in interrogation and elucidation."

Acting for Salford City Council, in the last year Katkowski successfully helped resist an appeal by developer Peel against refusal of a major residential development. He also promoted a large residential scheme on the edge of Norwich allowed at appeal. "He is still the most recognisable and charismatic planning barrister on the circuit," says one colleague. "He has seen it all, done it all and is completely at ease in front of any inspector or court in any situation." Another adds: "Still top class, still a force to be reckoned with and always charmingly deadly."

Warren is promoting a strategic rail freight interchange at Howbury Park, Bexley, through inquiry for Roxhill/ SEGRO. He is also advising the government on campaign group Friends of the Earth’s legal challenge to the revised National Planning Policy Framework (NPPF) and advising government on the Oxford-to-Cambridge corridor. He has also acted for Led Zeppelin guitarist Jimmy Page in his planning dispute with fellow musician Robbie Williams. Warren is "charming, thorough, a good organiser of teams and has a deep understanding of NPPF and London planning issues in particular", says one solicitor. Another adds: "He is both intellectually and emotionally intelligent, which really matters when you are promoting a difficult scheme."

Maurici is lead counsel for the Department for Transport in five judicial reviews brought against the designation by the secretary of state for transport of the Airports National Policy Statement supporting the expansion of Heathrow. He is also advising the South Downs national park authority in its promotion of its local plan, the first to cover the whole of England’s newest national park. One solicitor says: "He is thoughtful and calm, and has a fantastic ability to absorb detail and forensically build a case."

In the past year, Young has acted on eight new settlement proposals, several major urban extensions, logistics and employment proposals, new schools and religious buildings, and numerous care villages. He has also regularly defended decisions made by local planning authorities, inspectors and the secretary of state in the High Court and Court of Appeal. "An accessible and tenacious advocate," says one solicitor. Another adds: "Chris, probably literally, never sleeps."

In the past year, Turney has acted successfully on the Tilbury2 DCO on behalf of the Port of Tilbury. He also successfully defended the granting of planning permission and plan allocation of the former Dunsfold Aerodrome in Waverley for a new settlement of around 2,600 homes. He is described as "very bright and an extremely good advocate in court" by one solicitor, and a "technically excellent junior with good presentation and advocacy skills" by another.

Clutten appeared on behalf of National Grid Viking Link Limited, alongside Michael Humphries QC, in the recent appeal against the refusal of planning permission for one of the onshore sections of the proposed Viking Link electrical interconnector between the UK and Denmark. A commentator describes her as "one of the leading DCO barristers at her level", while another adds: "She is very astute and is great at breaking down complex issues in a client-friendly way."

Murphy appeared at the Bramshill appeal inquiry for the National Trust, which involved seven conjoined appeals against refusals the grade I listed Jacobean mansion at Bramshill and its grade I registered park and garden. The National Trust has a restrictive covenant in place at Bramshill, giving it a specific interest in the property. "She gives clear and robust advice and has a good understanding of the commercial drivers in any given case," says one colleague. "Melissa is really engaging with a cutting wit," adds another. "She cuts to the chase on what is important on a matter and demonstrates significant insight addressing legal issues. She is a very safe pair of hands."

Simons has acted on several planning inquiries into housing development across the UK for a range of developers, landowners, promoters and local authorities, as well as an important Court of Appeal case, Hallam Land v Secretary of State for Housing, Communities and Local Government, which dealt with the proper approach to housing land supply shortfalls. "He is hugely articulate, very strong on his feet and one of the brightest juniors at the planning bar," says one solicitor, while another notes: "He has a growing reputation as a senior junior barrister."

Correction: This article was amended at 11.10am on 29 March 2019 to correct minor discrepancies between the tables and the accompanying report with regard to four junior barristers' placings in the rankings. Mark Westmoreland Smith was placed fifth equal, not sixth equal as originally reported in the accompanying article, and Isabella Tafur was eighth (not ninth). Heather Sargent and Killian Garvey were 13th equal (not 14th).

Additionally, the table of the most highly-rated junior barristers under 35 was amended on 2.4.19, after it became clear that a flaw in our recording and checking of eligibility by age had led to several barristers who should have appeared in the table being wrongly omitted.