The coalition government and subsequent Conservative administrations have demonstrated a marked reluctance to allow development in the green belt. Nonetheless, the UK’s chronic housing shortage has continued to generate pressure to release protected land for building.

The policy position on the green belt remained largely unchanged when the National Planning Policy Framework (NPPF) was revised in July 2018. It says local planning authorities should regard the construction of new buildings as inappropriate in the green belt, with a few specific exceptions. Beyond that, it states that "inappropriate development is, by definition, harmful to the green belt and should not be approved except in very special circumstances".

In paragraph 144, the framework explains what that means in practice: "When considering any planning application, local planning authorities should ensure that substantial weight is given to any harm to the green belt. ‘Very special circumstances’ will not exist unless the potential harm to the green belt by reason of inappropriateness, and any other harm resulting from the proposal, is clearly outweighed by other considerations."

Defining those circumstances is problematic: "You can’t have a list of what constitutes very special circumstances because they will vary from site to site," says Fred Quartermain, a planning and environmental solicitor at lawyers Thrings. "We can infer things from decisions by the secretary of state, but it is reading between the lines."

Nor does the government’s Planning Practice Guidance (PPG) offer any further clues. In 2014, the then local government minister, Brandon Lewis, issued a written ministerial statement saying that unmet housing need was not in itself likely to constitute a very special circumstance. That was incorporated into national practice guidance, but does not appear in the latest version of the PPG, says Sarah Hamilton-Foyn, a senior director at planning consultancy Pegasus Group: "The PPG was updated in September 2018, following publication of the revised NPPF. It now makes no mention of the green belt. There will be further revision to the PPG, in the light of changes to the NPPF, so there might be some further guidance on green belt issues in due course."

Determining whether very special circumstances exist depends on evaluating the balance between planning factors: "That is why you get such a disparity in inspectors’ decisions. It falls to the determining authority to decide what the very special circumstances are in that case, and do they outweigh the harm to the green belt," observes Nicholle Kingsley, a partner in law firm Pinsent Masons’ planning team.

Jason Lowes, a partner in consultancy Rapleys’ town planning team, suggests applicants must identify factors that are specific to their site when seeking to argue that very special circumstances apply in their case. "I think quite a good way of looking at it is in the light of the objectives of sustainable development in paragraph 8 of the NPPF: the economic, social and environmental benefits. It can be a series of circumstances which in themselves might not be very special, but could amount to very special circumstances in combination."

Below, Planning highlights ten of the most frequent factors, and combinations of factors, that inspectors or the secretary of state have regarded as "very special circumstances" to justify green belt development in recent years. 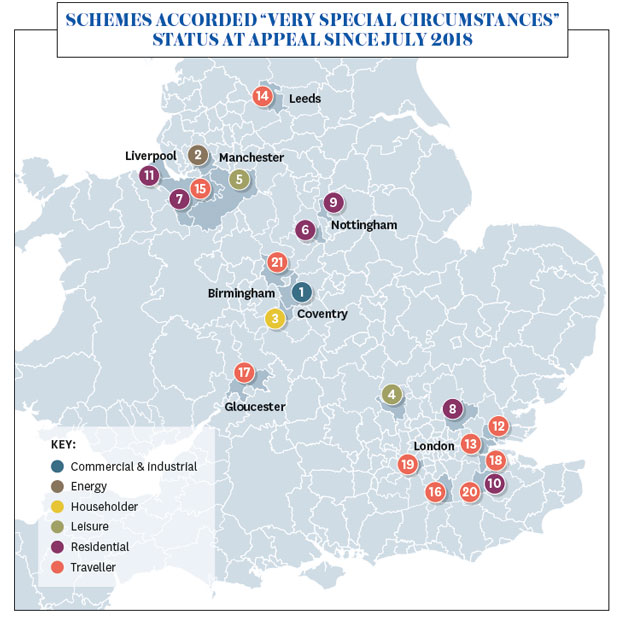 1: A lack of Gypsy and traveller provision plus personal circumstances

"Inspectors don’t accept personal circumstances alone, but where there are strong personal circumstances combined with the failure of local authorities to identify and then meet the lawful needs of Gypsies and travellers, that can clinch it," observes Mary Cook, a planning barrister at law firm Town Legal. Since July 2018, appellants have succeeded in employing this argument on at least eight occasions (see table, p17). In February, an inspector granted a change of use to residential for a plot of land in Thurrock, Essex, to accommodate a Gypsy family (DCS ref: 200-008-267). In arguing that very special circumstances existed, he cited "the very limited progress which has been made by the authority in terms of identifying sites to meet the acknowledged need [of Gypsies and travellers]," and added that "the best interests of the children… are at the forefront of my mind". On some occasions, inspectors have concluded that the circumstances are special enough to justify a temporary permission, but not a permanent one. A temporary consent was granted on that basis in January for a Gypsy and traveller site in Bradford (DCS ref: 200-008-225).

"Housing need will not normally amount to very special circumstances, but that is not to say it cannot be a major element of an argument," says planning barrister Chris Young QC of No5 Chambers. At an appeal inquiry last December, Young successfully made the case for the development of 79 units of extra care housing in the Kent green belt in Tonbridge and Malling (DCS ref: 200-008-147). The inspector considered that, while the lack of a five-year housing land supply was a "significant" factor, it was not by itself enough to outweigh the harm to the green belt. However, he was persuaded that it could amount to a very special circumstance when combined with other considerations.

"We also argued that the provision of retirement living provided health and wellbeing benefits for the elderly population. In addition, we utilised a novel argument that the development would lead to the freeing up of large amounts of family housing for which there was a pressing need," says Young. However, while that argument held water in Kent, a similar scheme in Surrey failed to make its case so successfully. In an appeal decision published in February, (DCS ref: 200-008-261) an inspector rejected plans for a care home and 110 extra care flats on green belt in Runnymede.

Another example of social infrastructure tipping the balance in favour of development came last year, when the then housing secretary Sajid Javid allowed a recovered appeal for the construction of 258 homes and a replacement school in the green belt at Effingham, Surrey (DCS ref: 200-007-428). Javid noted that the council could only demonstrate a 2.1 year housing land supply, which carried "very substantial weight", and concluded that, together with the great importance of ensuring a sufficient choice of school places, this was enough to outweigh the harm to the green belt.

3: Unmet housing need plus the site being the most appropriate one for new homes

In May 2018, an inspector granted permission for a 175-dwelling development in the green belt in Ruddington, Nottinghamshire (DCS ref: 200-007-613), which was not subsequently called in by the secretary of state. The inspector attached "considerable weight" to the council’s admission that it had identified only 3.1 years of housing land supply. Meanwhile, it was acknowledged by the inspector that future housing provision in the area would need to be in the green belt. Rushcliffe Borough Council’s own assessment of the site gave it the lowest green belt value of all such land on the edge of Ruddington.

Where an activity contributes significantly to the economic or cultural life of an area and cannot realistically be transplanted elsewhere, decisionmakers have sometimes shown themselves willing to allow green belt development. In August 2018, an inspector allowed an extension to the Anson Engine Museum in Cheshire (DCS ref: 200-007-825). He ruled that the extension would significantly improve the visitor experience and provide benefits to the local economy. In May 2018, councillors in Windsor and Maidenhead made a similar case, arguing that the contribution to the local economy and tourism outweighed any harm to the green belt when approving the extension of the Legoland Windsor visitor attraction to provide a holiday village and three new rides, overruling officers’ recommendation of refusal. An economic argument was also partially responsible for convincing an inspector last September to allow the continuation of motor vehicle-related activities near Hemel Hempstead (DCS ref: 200-007-856), which supported 27 fulltime employees, as well as providing recreational benefits.

Metropolitan open land designation provides land with the same level of protection as the green belt. Planners at the London Borough of Ealing therefore needed to argue that very special circumstances existed when granting planning permission for a training centre for Queen’s Park Rangers Football Club alongside a community sports facility in June 2016. They concluded that the scheme was the only viable way to provide improved recreational facilities for the community. The decision was upheld by the Court of Appeal in March last year (EWCA Civ 556).

6: A need for rural worker accommodation plus business viability

Three recent decisions demonstrate that inspectors are sometimes willing to consider the need for on-site housing for agricultural workers as a very special circumstance. In December 2018, Erewash Borough Council in Derbyshire’s decision to deny planning permission for a bungalow to house a farm worker was overturned at appeal on the grounds that there was a clear requirement for a dwelling on the site to maintain a viable agricultural enterprise (DCS ref: 200-008-101). Inspectors came to similar conclusions in Cheshire West and Chester (DCS ref: 200-007-902) in September and in Ashfield in August (DCS ref: 200-007-806).

7: A need for a strategic rail freight interchange

An application for a strategic rail freight interchange on a green belt site near Radlett in Hertfordshire was recovered by the secretary of state, who approved the scheme because of the need for the facility and a lack of appropriate alternative locations (DCS ref: 100-080-141). A challenge to the decision by the local authority, St Albans Council, was blocked by the High Court in March 2015.

Last October, consent was granted at appeal for the development of a peak power generation and grid balancing facility in the green belt in Warrington (DCS ref: 400-020-136). The inspector attached significant weight to the environmental benefits of the proposal and moderate weight to its economic benefits.

9: Enabling the conservation of a listed building

A 31-home development in the Wirral green belt was approved by an inspector in December because it was necessary to secure the conservation of the Grade II*-listed Storeton Hall (DCS ref: 200-008-092).

10: A need for crematorium provision

In November 2017, an inspector accepted that there was a compelling need to provide greater crematorium capacity in Staffordshire, and that it would have to be located in the green belt (DCS ref: 200-007-003) 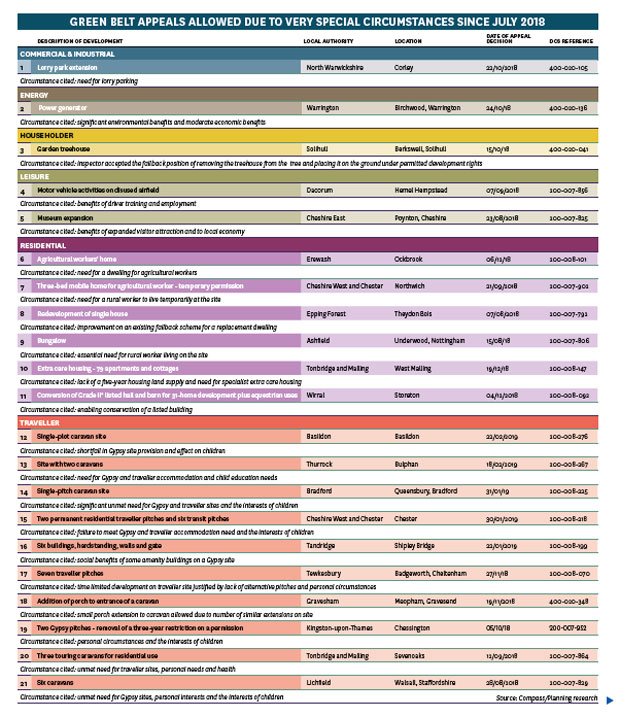