The study by the Women in Planning network, which has been published today on International Women's Day, examined 379 private planning consultancies and planning teams within multi-disciplinary firms.

Of these, a total of 1,016 planners worked at a director or partner level and above, including senior director, senior partner, managing director or chief executive.

The research found that women filled just 17 per cent of these leadership positions, with men filling 83 per cent (see pie chart, blow).

At a senior leadership level, the research found that 29 per cent of these roles were filled by men, with women filling only five per cent.

At the more junior director level, men filled 54 per cent of these roles and women 12 per cent.

According to Women in Planning, 354 of the 379 consultancies surveyed were based in England.

Similar to the UK results, the survey found that, out of 938 planners in England, men filled 83 per cent of the leadership positions and women just 17 per cent. 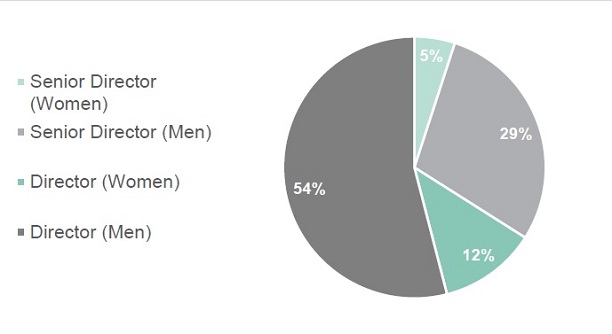 The report states that Women in Planning will be carrying out further research into "what actions the planning profession and wider sector should take to improve the gender balance at the leadership level".

It will also carry out a similar study on how many women are in leadership positions in local planning authorities.

Charlotte Morphet, national co-chair of Women in Planning and the chief researcher, said: "The data shows that, in planning consultancies and consultancy firms with planners in the UK, there is a lack of women working at leadership level.

"This may seem obvious, but it is important we have evidence to show this. We consider this type of evidence is needed across the sector.

"From this baseline, Women in Planning want to provide the right support for women who want to rise to leadership level to ensure greater diversity in planning."

Women in Planning describes itself as "an independent network that has a vision to increase diversity, equality and inclusion in planning".

It found that the mean proportion of female planners in the Planning Consultancy Survey 2018's leading firms was 38 per cent. But for female planners at director level at those consultancies, the average was 19 per cent, exactly half the overall figure.