In his 2016 mayoral manifesto, Sadiq Khan made more than 200 pledges to Londoners. One stood out above the rest. "My first priority will be tackling the housing crisis," said the Labour candidate. "We need to build more homes, including more genuinely affordable homes for Londoners, and fewer gold bricks for overseas investors."

During the election campaign, Khan committed to "an ambitious target of 50 per cent of new homes being genuinely affordable" – a figure now included as a "strategic target" in the draft new London Plan. Achieving this goal will require an increase in the number of affordable homes delivered directly by the public sector but, just as importantly, will also require a rise in the number of homes provided by the private sector.

In August 2017, Khan published his affordable housing and viability supplementary planning guidance (SPG), setting out the way in which private developers would be asked to play their part. The document outlined a new "threshold approach" to viability. Under this policy, applications for developments providing at least 35 per cent affordable housing, without public subsidy, are ‘fasttracked’ through the planning process, without the need to provide detailed viability information.

Nearly three years into his mayoralty, how is the mayor actually performing? Analysis by Planning (see panel, right) shows that just over half of the 22 planning permissions granted for schemes of more than 500 homes in the capital last year and in January this year met this 35 per cent threshold. Two schemes provided or exceeded 50 per cent. However, at the other end of the scale, four schemes provided less than 20 per cent affordable housing. The average of all the 22 schemes is 35 per cent, exactly the same as the mayor’s threshold. 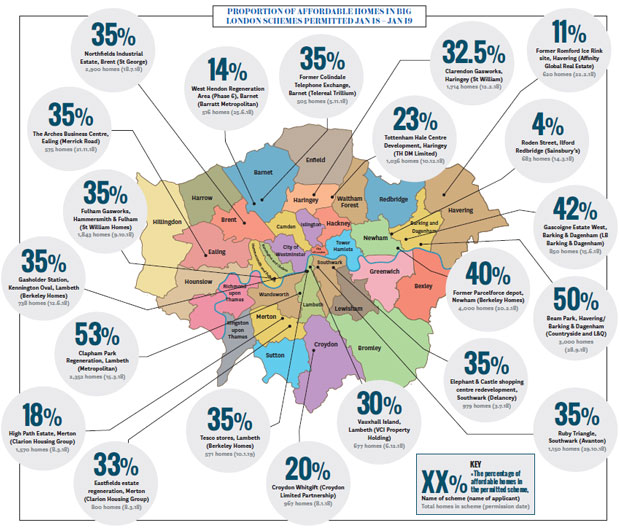 Asher Ross, planning director at consultancy GL Hearn, says the promise of a fast-track planning process has provided a clear incentive to meet the 35 per cent threshold. Applicants have begun to weigh up the cost of providing higher levels of affordable housing against the benefits of securing planning permission quickly, he says: "The development industry loves certainty. Uncertainty costs money; it leads to delays. We’re seeing more developers saying: ‘We want to get planning permission in the next six months so let’s put in 35 per cent’."

At the same time, Ross has witnessed a growing willingness in City Hall to be flexible about other matters if it will allow more delivery of affordable homes. "The issue of affordable housing and viability began overriding everything else," he says. "The message was: ‘We’re trying to maximise the amount of affordable housing. If that means we have to increase density, go a bit higher, push the boundaries of a development, that’s something we can look at’."

Grant Leggett, director at consultancy Boyer, helped secure planning permission for two major schemes in Lambeth last year – both of which met the 35 per cent affordable housing threshold. Leggett agrees that the desire to see schemes hit this target is being reflected in planning authorities’ willingness to negotiate in other areas. "What we’ve found effective is going to the mayor or local authorities and saying: ‘We can give you 35 per cent if the building is going to be 16 storeys rather than 12 storeys’," he says. Leggett believes this flexibility is helping to push up the proportion of schemes bettering the mayor’s fast-track threshold. "There are now a lot more planning permissions being granted on major schemes delivering 35 per cent than there would have been," he says.

Until the emerging London Plan passes examination and is adopted, it remains up to boroughs whether to adopt the mayor’s fast-track approach. Some, such as Brent, are in the process of incorporating the policy into an emerging local plan. Alice Lester, head of planning at Brent Council, says: "It will save us time. It gives more certainty. It will hopefully speed up development." Lester says the borough is prepared to work flexibly with developers on issues such as height and density to shape policy-compliant schemes that will meet the affordable housing threshold. "It’s about negotiation," she says.

Likewise, Matthew Bennett, cabinet member for planning at Lambeth Council, says: "We would never just trade off and allow something to be built that didn’t fit the urban form. But there’s always these discussions to try and work this out together." Lambeth secured a 53 per cent affordable housing contribution to the 2,532 Clapham Park regeneration scheme last year – just above the mayor’s higher 50 per cent threshold for projects on public land. "Our priority is a good quality development and good quality means a high level of affordable housing," says Bennett. "We will engage early and be collaborative in the way that we work."

Southwark Council approved the Ruby Triangle and Elephant and Castle shopping centre development schemes last year – securing 35 per cent contributions from two schemes providing a total of 2,129 homes. Johnson Situ, cabinet member for planning at the authority, says committee members feel increasingly confident in seeking higher levels of affordable housing, in the knowledge they won’t later be overruled by the mayor. "It’s been really helpful to know we’ll be backed up by the GLA," he says.

While developers able to meet the 35 per cent target can face a smoother ride through the planning system, Leggett says securing permission for schemes that come under this benchmark is now more onerous. "It’s always been a bit of a slog," he says of applications that rely on a viability assessment. "We’re finding the level of interrogation is even greater. Officers are picking apart the scheme in a way we’ve never seen before."

Despite this, some schemes are still being permitted with contributions far below the threshold. According to Leggett, developers are still using the price being paid for land to justify viability assessments that produce a contribution of less than 35 per cent. While the mayor’s SPG did limit the circumstances in which this argument can be made, he says there are still scenarios where it’s justifiable.

One major scheme that Lambeth permitted, Vauxhall Island, provided only about 30 per cent affordable housing. Bennett says: "We’re looking at the wider context whenever these things come forward. Vauxhall Island allows us to bring forward a very long-term objective in removing the gyratory road system and achieve other regeneration goals."

Some developers "feel they have to sign up to 35 per cent" but then find their scheme is not viable and cannot be built, says Leggett. Anyone who bought sites based on assumptions predating the SPG policy will struggle, he adds: "The development process is a long one, and there are plenty of people who invested in land three to five years ago who’ve been stung. Build costs are going up at a rate that greatly outstrips sales values."

James Murray, deputy mayor for housing at City Hall, remains confident that the viability policy will pay off, following low levels of affordable housing contributions in recent years (see panel). He argues that the situation reflects badly on Khan’s predecessor Boris Johnson, saying it "shines a light on the appalling legacy we inherited from the previous mayor". It’s a well-worn political strategy to blame difficulties on a hangover from the previous administration – but with the 2020 mayoral election on the horizon, Khan is under pressure to demonstrate that he has shaken off its effect.

The Greater London Authority’s (GLA’s) own figures (see line chart) show that in 2017/18 the number of affordable homes granted permission dipped to 13,203, the lowest level in the capital since 2012/13. The decline since 2013/14 reflects a decline in the overall number of homes consented in London in the same period. In addition, between 2016 and 2018, in Khan’s first two years as mayor, the average proportion of affordable housing in permitted schemes of ten homes or more flatlined in the low 20s. This is around the same level as the tailend of the Boris Johnson years and almost half the rate in 2008-10. However, the same figure for the first three quarters of 2018/19 show a marked rise, at 27 per cent. If maintained in the final quarter, this would be the highest figure since 2012/13.

Under Johnson’s eight-year tenure, the proportion of affordable housing contributions dropped sharply from a high of 45 per cent in his second year as mayor to just 21 per cent in his final two years. 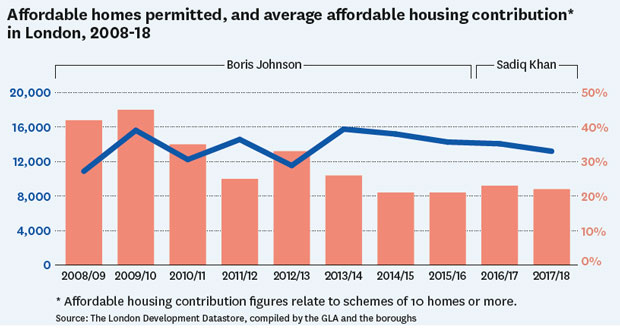