Reports that budgets have not risen in line with fee increase

In autumn 2018, Planning, in partnership with the Planning Officers Society, surveyed council planning chiefs about their resources, including the impact of the application fee rise. We received 25 eligible responses. In total, roughly half of the respondents to the survey said the revenue from the fee increase would translate into an equivalent increase or better in their department’s overall 2018/19 budget. However, the other half said it would not.

When introducing the ability for councils to increase fees, the government explicitly stated that, as a condition of implementing the rise, the additional income must be ploughed back into planning department budgets. But our survey shows that is not happening across the board.

According to Stephen Hill, a director at consultancy Hyas Associates, it was unrealistic to think that councils would not find ways to siphon off funds to support other service lines. "A number of planning departments are concerned that the fee increase won’t feed through to them," he says. "If you’re in a metropolitan area where the squeeze is on education and social services, then fees may not feed through into more resources for planning. The government has said that it should, but they can’t enforce it – that’s the problem. It’s a big increase, so some councils will just see it as a new income stream."

There is broad agreement on this point. Derek Stebbing of consultancy Intelligent Plans and Examinations, a former council planning policy manager, says: "Certainly, the fee increase was ring-fenced for planning, but I suspect there is creative accountancy going on." Cristina Howick, a director at consultancy Peter Brett Associates, which advises a number of local planning authorities, adds: "We don’t think it’s translating at all. We’re not seeing much evidence that planning departments have much more money than they did before." 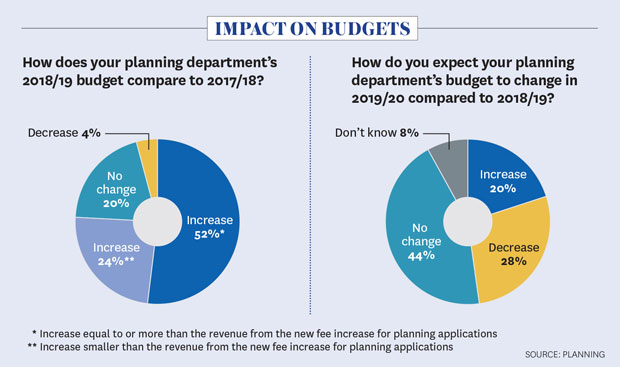 What’s more, respondents were more pessimistic about their departmental budgets for the 2019/20 financial year than they were about their existing ones. While just over three-quarters said their 2018/19 budgets had increased compared to 2017/18, only 20 per cent said they expected it to increase again next year, while 28 per cent said they thought it would shrink.

In part, that is due to ongoing scepticism about how the January 2018 20 per cent uplift in fees will be used, as well as continuing doubt about the implementation of the mooted additional 20 per cent rise being pondered over by ministers, according to Mike Kiely, chair of the Planning Officers Society, which represents public sector planners. The government announced in September 2017 that it was considering allowing a fee increase of a further 20 per cent by authorities delivering the homes needed by their communities.

But the pessimism is also down to negative sentiment about the health of the development industry. Brexit, in particular, is a source of concern. "Going forward with Brexit, there is a lot of uncertainty out there and therefore fewer applications coming forward," says Zayd Al-Jawad, assistant director of planning and regulation at Stevenage Borough Council, speaking in a personal capacity. "We have certainly been more cautious about projecting budgets for 2019/20."

Howick agrees. "If the flow of applications is slowing, even if the fee rate is higher, that doesn’t mean your overall income will be higher," she says. "There is a nervousness in the market about Brexit. Some projects are put on hold and bank finance may be getting harder to access. It means that departments can’t be certain of income when they look ahead."

However, Brexit is not the only factor. Long-term structural issues in the retail market have also had an impact on the volume of development coming forward. "Retail development is slowing down," says Hill. "It’s not just Brexit – there are other reasons at play."

Development management and principal officer roles are most difficult to fill

This year’s survey also highlights the recruitment difficulties facing local authority planning departments. Here, the figures are dramatic. Some 80 per cent of respondents said they were finding it difficult to recruit development management professionals, while 68 per cent reported problems finding policy and plan-making professionals. Consultant Gilian Macinnes, who advises local authorities, says councils face "direct competition for trained planning officers and particularly those with major development experience" from planning consultancies and developers, as well as the recently-expanded government agency Homes England. Al-Jawad adds that anti-planner rhetoric from the government since 2010 has deterred people from entering public-sector planning.

Meanwhile, 60 per cent of respondents said that they found it tough to recruit at principal officer level. According to Stebbing, the local government cuts that followed the 2008 financial crisis are a major factor, with experienced planners often having chosen to embrace voluntary redundancy packages and make the move into the private sector as the development market bounced back. "The shortage is in people who had been in principal and above posts, who in many cases were an easy cut for authorities because their salaries and add-on costs were considerably higher," he says. "So, there isn’t that pool of officers available to recruit." 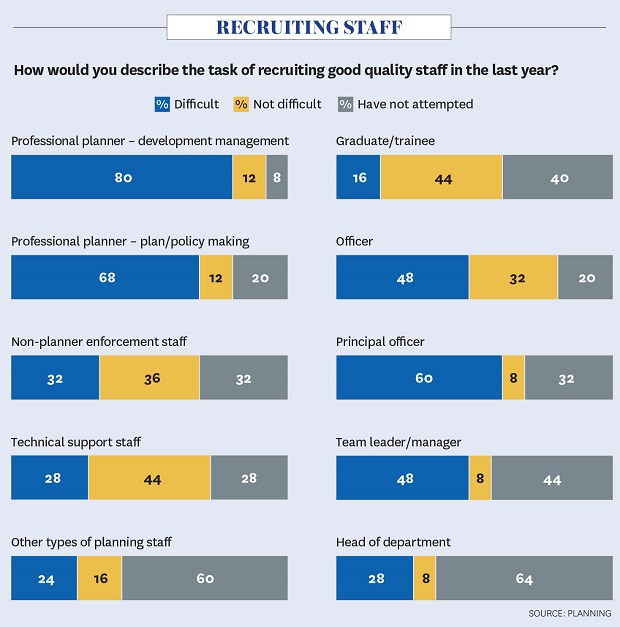 Authorities plan to train up non-planners

In order to address a shortage of professional planners, our survey found that planning authorities are training people without planning qualifications to fill the gap. All in all, 80 per cent of respondents said they have already done this, while 60 per cent said they would in the near future

"Growing your own is an increasing feature of local planning authorities," says Kiely. "It’s a function of necessity, but also a more general attitude to apprenticeships and widening access to professional careers. It will mainly be aimed at technical support staff, but not exclusively so." Macinnes adds: "Most authorities have always ‘grown their own’, but this expands in times of shortage."

Stebbing agrees. "People who used to be described as planning technicians are being trained up to handle applications," he says. "It’s broadened the opportunity for people entering planning without a qualification." 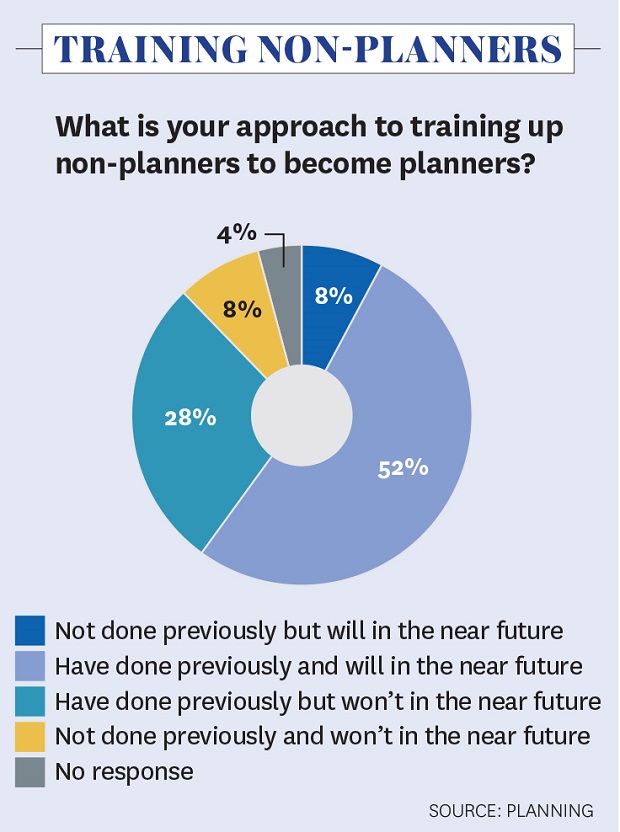 Contractors’ fees on the rise

Our survey findings also suggest that the recruitment issues facing planning departments have been a boon for agency or contractor professional planning staff. In total, 60 per cent of respondents to the survey reported that fees for agency and for contractor staff had increased over the past year, with 36 per cent saying they had risen by more than ten per cent. Hill says this is a result of experienced officers leaving councils to become independent consultants or to join agencies, who are then hired back by local -authorities as contractors to fill a skills gap. "It’s basic supply and demand," he adds. "It’s more expensive for councils, but for the individuals it’s a way of getting a pay rise at a time of public sector pay restraint." 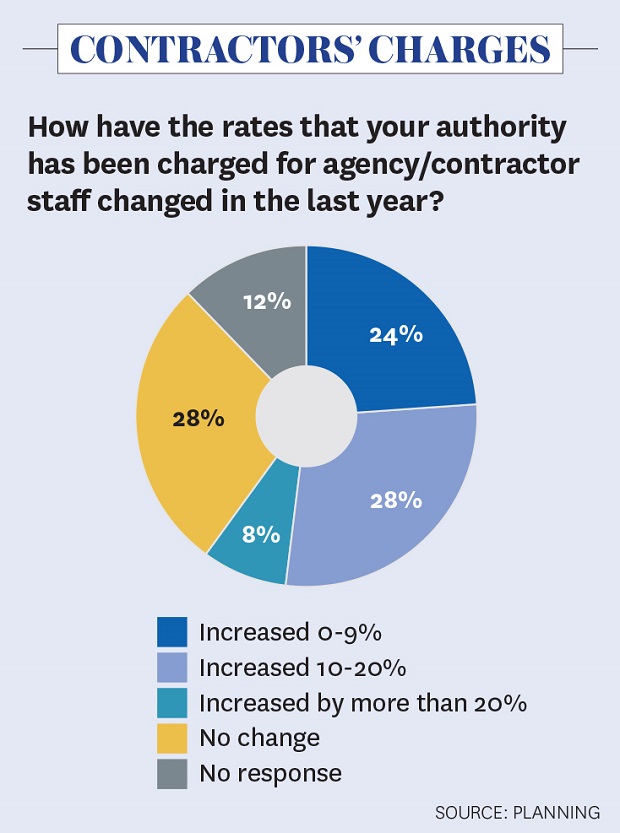 In addition, planning chiefs estimated an average additional fee income per year of £140,200 from the rate increase. They also said overwhelmingly that development management would be the type of work most likely to benefit from extra funding in 2018/19 and the area in which staff headcounts in 2018/19 would be most likely to increase. 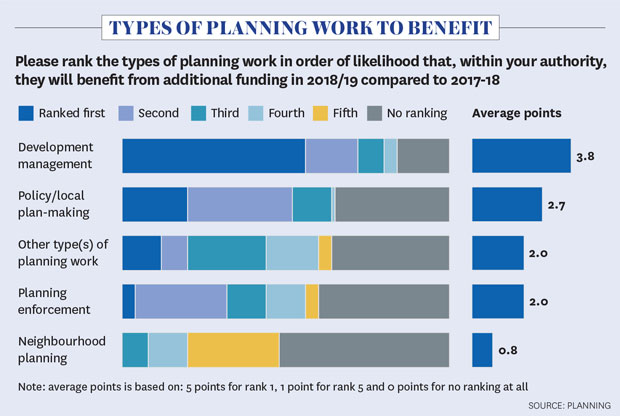 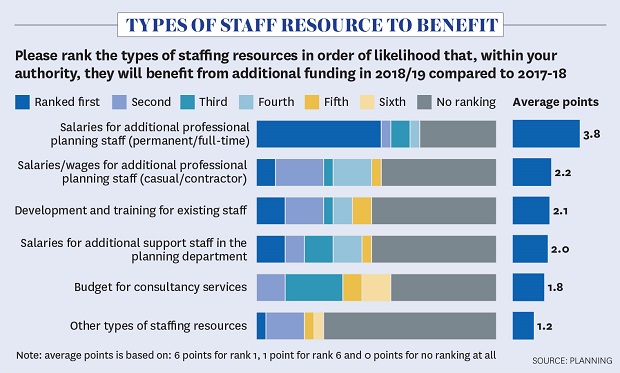 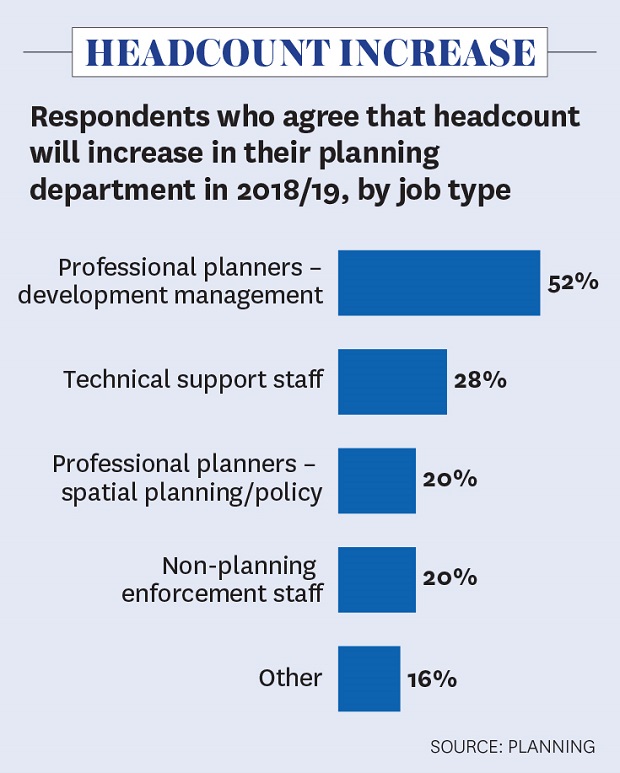