Consultancy WSP found that space above the capital's train, overground and tube tracks could allow an additional 2,470 hectares of land to be developed, the equivalent of 280,000 homes.

The new report identifies sites where development would be most suitable, WSP said, and ranks each borough according to the amount of potential housing land it has.

After examining all exposed rail tracks in Transport for London’s (TfL's) fare zones one to six, WSP said it has uncovered 14 per land more land with potential for overbuild compared to last year's report by using a new methodology.

The firm said it also took into account socio-economic and socio-environmental criteria including population density, accessibility to public transport and proximity to local authority opportunity areas to replicate the factors that planning decision-makers consider when assessing development projects.

It also considered engineering and construction constraints when examining potential sites for development, including the length of tracks and the size of the site, which needs to be 100 metres minimum length.

WSP said the amount of suitable land identified would provide 280,000 new homes, assuming that buildings would be 12 storeys high with homes of 100 square metres.

According to the report, almost two-thirds of this land (1,617 hectares) "has the capacity to create close to 180,000 homes in highly suitable or most suitable areas for development".

The study found that the London boroughs of Brent, Ealing and Croydon have the most ‘overbuild’ development potential with respectively 187, 166 and 142 hectares.

In central London, Wandsworth, Newham and Hammersmith and Fulham also rank highly, the report added, while travel zones two, three and four were the most productive zones (see report map below). 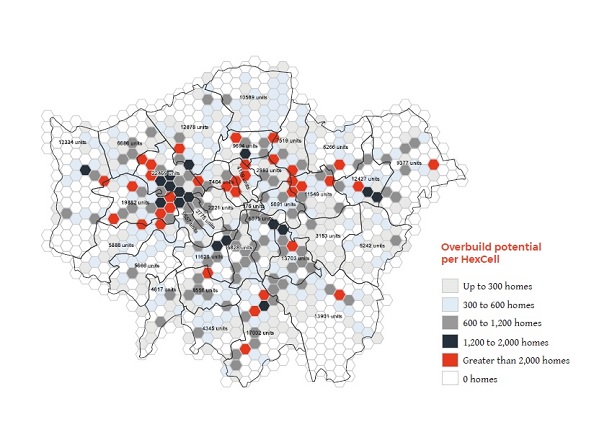 The report refers to the draft New London Plan target of 66,000 homes a year to meet demand. But it says that recent data from the National House-Building Council found only 2,917 homes planned for construction in the three months to June 2018, the lowest total for that quarter since 2009.

Bill Price, WSP director, said: "As an industry we need to focus on radical solutions to overcome the housing crisis in our capital."

Price said rail overbuild had "extraordinary potential", adding: "They achieve the densification that London’s local authorities can use as economic development tools to provide growth, connectivity and jobs in the community."

The report can be downloaded here.