At the start of November, Royal Town Planning Institute chief executive Victoria Hills stood in front of an audience in central London and spoke about diversity. "From a planning perspective, it’s really rather simple," she said. "It’s about being representative of the communities we represent."

This week, the institute followed up Hills’ message with the launch of a "vision statement", backed up with an action plan to be developed next year, promising to move towards a planning profession that is more representative of the society it serves. "We will act inclusively, treat everyone fairly, and seek to provide a culture which delivers the best outcomes for the diverse society in which and for whom we work," the statement concluded.

Diversity can mean many things, but gender balance is a key indication of progress. This year, the Planning Consultancy Survey has revealed a mixed picture on the position of female planners employed by leading firms. The proportion of female planners within those firms ranges from 25 to 55 per cent but the mean is 38 per cent – matching the proportion within the RTPI overall. That for female planners at director level within consultancies. At the vast majority of firms, less than one in three planning directors are female and the average is 19 per cent, exactly half the overall figure.

"That’s pretty shocking," says Charlotte Morphet, co-founder of Women in Planning, a network set up in 2012 to support and promote women in the profession. Morphet said the figures show that much more work remains to be done to improve the gender balance at all levels in the profession. Increasingly, Women in Planning is expanding to facilitate that kind of work. "In the last year we’ve gone from one branch to 13," says Morphet. "That uptake in 2018 really shows that women want to be supported and want some way to showcase themselves."

Three firms reported a proportion of female planners equivalent to 50 per cent or more. Atkins tops the gender balance table with women representing 55 per cent of the firm’s planning team, followed by CBRE with 51 per cent and Arup with 50 per cent. Alison Tero, senior director in CBRE’s planning team at CBRE, explained why an equal gender balance makes sense from more than one perspective. "You have clients from a wide diverse range of backgrounds, so it’s about looking at your clients and being able to respond to their diversity needs. Ultimately it’s about progress and what’s right for the business. It’s about working with the best talent, irrespective of gender."

These three firms all said their gender balance is the result of conscious efforts to recruit more women and improve diversity in general. Tero said CBRE has secured positive results from initiatives such as "unconscious bias" training to ensure equal opportunities at the recruitment stage. "If you look back several years we would have had two-thirds men joining the business," she said. "Now we’re absolutely 50:50." Policies are also in place to help ensure women are able to stay in post throughout their career. In recent years, CBRE has introduced enhanced maternity and paternity leave and a programme to assist women returning to work after a break to start a family.

Victoria Jones, head of talent acquisition at Atkins, said the company has made efforts to attract a diverse mix of applicants and used unconscious bias training to help ensure that it recruits the best individuals regardless of gender, race or background. In 2011, the company introduced a women’s development programme that offers training in "personal branding" and professional network building. "We’ve found that women who have been part of the programme are going for promotions, taking on more responsibilities and bigger projects," she said.

Richard De Cani, head of planning for UK, the Middle East and Africa at Arup, said company culture and offering a wide range of potential career paths can play a big part in attracting a diverse mix of employees. Initiatives such as flexible working are important, he said. "We have a range of clients and projects that appeal to a broad range of people. We also create opportunities for people to move around the firm whether that’s within a particular building, the UK, or overseas."

While these kinds of initiatives can help attract female planners, Women in Planning and the RTPI say more must be done. Hills says there is now a 50:50 split between men and women embarking on planning careers. "But there is more work to do to encourage the best talents into the profession, regardless of background, gender, age or disability." Morphet said the paucity of women reaching senior roles in the profession deserves further scrutiny. "We don’t have the answers but we’re going to be asking our members over the next year what they think the barriers are," she said.

To view the enlarged version of the table below, click here. 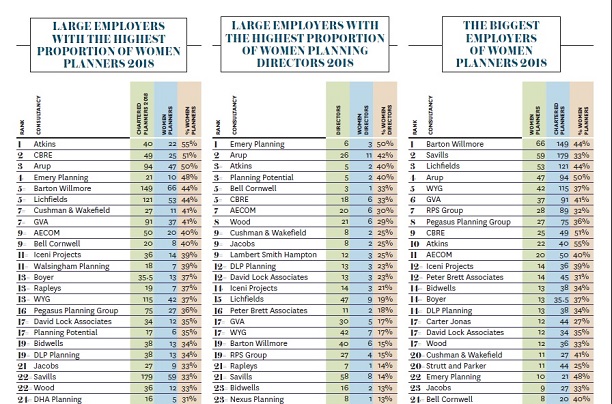