The new test compares actual construction of homes over a three-year period against the assessed need for new homes, with the worst performing authorities risking having their plans declared out of date. While Planning’s analysis of published data suggests that few if any councils will suffer this fate immediately, a significant number are likely to fall short of the required threshold, set at 85 per cent delivery against assessed need, that will mean they have to find a 20 per cent "buffer" of additional deliverable housing sites.

On the other hand, a large number of councils are likely to see an existing requirement to provide a 20 per cent buffer against underdelivery removed. For some authorities, the requirement or otherwise for a 20 per cent buffer will make the difference between being able to demonstrate a five-year land supply or not. So, what are the likely implications of the test when it finally comes in?

Under the 2012 National Planning Policy Framework, most authorities were required to provide a five per cent buffer of deliverable sites on top of their five-year supply, while those guilty of "persistent underdelivery" had to find a 20 per cent buffer. However, "persistent underdelivery" was never specifically defined. Revisions to Planning Practice Guidance (PPG) this year make clear that the 20 per cent buffer applies where authorities fail to reach 85 per cent of their requirement under the Housing Delivery Test. 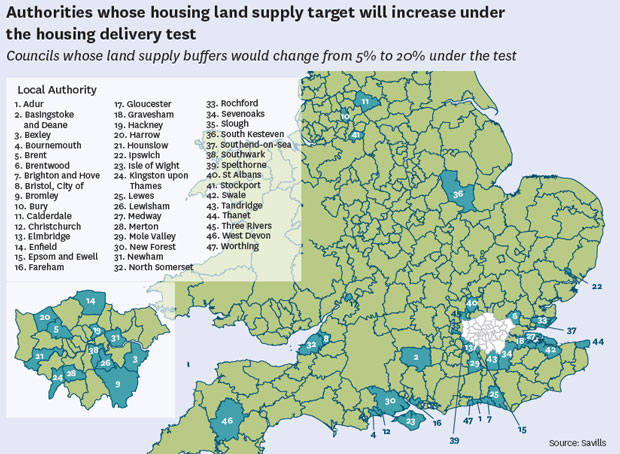 Consultants suggest that, overall, fewer councils will be caught by the new test than were previously deemed to be persistently underdelivering. An analysis by consultants Savills, shared with Planning, suggests that 105 authorities – nearly a third – are likely to see an existing requirement to provide a 20 per cent buffer removed, leaving them with just a requirement to show a five per cent buffer.

Savills’ estimate is formed from published available data and the government’s published method for calculating the Housing Delivery Test. However the company says that, given the complexity of the calculation, its figures should be considered as estimates until publication of the formal test results by the government, and not relied upon for decision-making.

According to the PPG, the change will apply immediately once the Housing Delivery Test results, due this week, are published. "This changes the five-year supply position on the day of publication," said Jonathan Dixon, an associate director in Savills’ planning team.

Because the test is predicated on the new standard method for assessing housing need, which tends to produce higher requirements in areas of high housing demand, consultants suggest that authorities in those areas will be most likely to have a 20 per cent buffer newly imposed. Conversely, councils in low-demand areas will be more likely to move in the other direction.

This change will have the biggest impact in authorities for whom the 20 per cent buffer requirement makes the difference between whether they can demonstrate a five-year supply or not. Assessing where this will have an impact is very difficult, because the criteria for how authorities demonstrate that sites are deliverable have also been changed recently in national planning policy.

In principle, authorities such as Brighton and Hove City Council – which recently claimed a housing land supply of exactly five years but which is now, according to Savills, likely to have to provide a 20 per cent buffer – could suddenly become vulnerable to speculative applications. Dixon said: "In theory, there is some opportunity for applicants here, as authorities may take a different view on applications and appeals after the test results are published."

For authorities affected in this way, PPG requires them to establish the 20 per cent buffer by bringing forward sites already identified but previously earmarked for later in the plan period. In most cases, this will mean councils demonstrating that additional sites are deliverable now, rather than consulting on finding new sites. "They’ll need to find more sites that can deliver in the relevant period," said Matthew Good, a planning director at consultants WYG. "Those with between five and six years’ supply now will find themselves out of date."

But more authorities should find that the test results boost their housing land supply position. Richard Crawley, programme manager at the Planning Advisory Service, said: "Many ambitious northern metropolitan councils will suddenly find themselves with an adequate land supply for the first time in years because they have escaped historic underdelivery." This outcome is likely to affect a number of schemes where developers had planned to justify non-policy-compliant applications on the basis of a lack of a demonstrable five-year land supply. Mike O’Brien, a director at consultants Turley, said this issue would be "significant" at appeals, potentially determining the outcome, though Dixon said it is unlikely to be widespread.

Good said that latest developments have reinforced the sense that the delivery test will prove a "damp squib" in terms of forcing authorities to deliver more homes. "This is potentially rewarding those authorities that have not got plans up to date. It’s allowing them to get away with it," he said.