The delivery test, which was introduced in July's revised National Planning Policy Framework (NPPF), aims to ensure that local authorities actually build enough homes as well as plan for them.

It works by imposing various sanctions on authorities who fail to deliver over the previous three financial years against their housing requirement.

In this year's test, authorities delivering less than 25 per cent of their requirement face the NPPF's presumption in favour of sustainable development penalty, which renders their local planning policies out of date.

Next year, the delivery test threshold for the presumption penalty will be raised to 45 per cent of delivery against the target, and in 2020 to 75 per cent, at which level it will stay in future years.

The government will formally publish its first delivery test results, for the three years from 2015 to 2018, before the end of this month.

Research by Planning (see graphic below) using the government's latest 2017/18 net housing additions figures, found that no councils would be under the 25 per cent threshold for the 2015-18 period.

However, there are nine councils that delivered less than 45 per cent of their housing requirement in that time: Redbridge in London, New Forest in Hampshire, Adur in West Sussex, Calderdale in West Yorkshire, Trafford and Oldham in Greater Manchester, East Cambridgeshire, Thanet in Kent and Three Rivers in Hertfordshire. 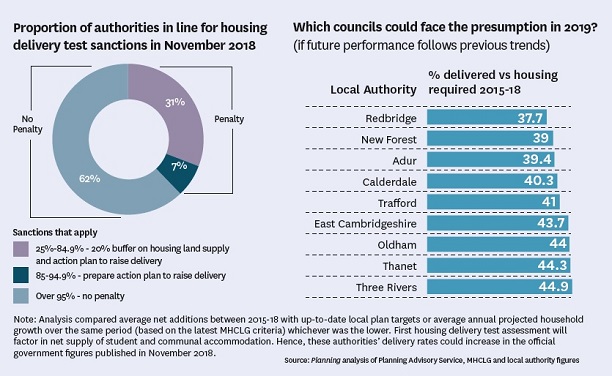 Next year's test, due in November 2019, will consider delivery rates between 2016 and 2019, meaning these councils have until next April to increase the number of homes created in their areas.

Meanwhile, a total of 76 councils, just under a quarter of all English local planning authorities, delivered under 75 per cent of their requirement. If their delivery rates remain unchanged in the two years up to April 2020, this means they would face the presumption penalty in November 2020.

For this year's test, Planning found that just under two-fifths of councils, 128, would have to prepare action plans, while 31 per cent would be required to have a 20 per cent buffer in their housing land supply.

A spokeswoman for the London Borough of Redbridge, which has the lowest delivery rate in our survey, said:  "In Redbridge, we have an ambitious housing vision and have recently secured funding for 600 affordable homes as part of our commitment to securing 1,000 new high- quality affordable homes over the next four years.  With the adoption of the local plan earlier this year we are set to deliver over 17,237 homes over the next 15 years.

"We’ve also established a wholly-owned development company to build new housing in the borough, maximising the use of our own assets.

"We have also launched a development prospectus for Ilford to accelerate delivery of new homes in the town and are working proactively with developers to reshape our planning processes.

"Despite austerity, we are doing our bit to unlock the delivery of new housing in the borough."

An analysis article looking at the impact of the latest net addition figures on the housing delivery test can be found here.

A similar analysis we carried out last year, looking at delivery rates in 2014-17 can be found here.