Despite clear concerns about the economic climate, almost two-thirds of the UK’s planning consultancies expect their headcounts to grow next year, this year’s Planning Consultancy Survey has found. Some 60 per cent of firms believe that their planning team will grow in size – which is exactly the same figure as last year – while all but one of the 20 biggest companies predict that their planning team will increase.

While the average number of chartered town planners employed by the firms that completed this year’s survey was higher than in previous years, the rate of growth has slowed considerably. The average number of planners employed by participating firms has risen over the past four years – but at a gradually reducing rate – from 12.9 in 2015 to 14.7 in 2016, 15.5 in 2017 to 16 this September.

Planner numbers at the ten biggest employers in the survey who also took part last year are almost static. They report that they employed a total of 966 planners in September 2018, compared with 965 in 2017. Two of the top ten have reported significant drops in planner numbers compared with last year. Nine of the 2017 top ten feature again this year, with the other place occupied by GVA, who last provided results for our survey in 2009.

For the fourth year in a row, Savills tops the list of the biggest employers of chartered town planners. The company added ten planners in the past year, bringing its total to 179. According to head of planning David Jackson, the growth in headcount was "quite balanced" in terms of seniority, with increases "at all status levels", although he adds that the company took on a record 19 graduates in the past year.

The recruitment drive was prompted by increased activity across all regions and sectors, Jackson says, but with "a particular increase in infrastructure projects, including new road and rail  projects and work in the energy sector, where we are advising on a number of new nuclear facilities". In the past year, Savills has also launched a dedicated heritage team and expanded its economics team. In addition, it established a new planning team in Newcastle and acquired Porta Planning in July. This deal added nine planning professionals to its London team, which overall increased by ten chartered planners (see map).

With 149 chartered planners on its books, Barton Willmore again takes the second spot in this year’s listing, having grown by six in the past year. According to senior partner Mark Sitch, the appointments were at associate and director level, while growth was largely "due to investments being made in the infrastructure and energy sectors, and in the heritage-specific planning aspects of our business". He adds that estate renewal, urban extensions and education facilities were also drivers. The company’s Cambridge team expanded significantly in the past year, growing from seven to 12 planners. It also opened an office in Glasgow, taking its national network to 13 sites.

In third place in the ranking is Lichfields, which now employs 121 chartered planners, up from 115 last year. The increase, says chief executive James Fennell, is down to the fact that several of its staff have achieved chartered status in the past 12 months. At fourth-placed WYG, the number of chartered planners fell by 24, from 139 to 115. Director Gerald Sweeney says: "As people have naturally moved on during the last 12 months, these teams have seen a lot of new people arriving with their core specialisms but without sufficient town planning experience to have applied for and achieved membership of the Royal Town Planning Institute." He adds that the company currently has about 25 people in its planning teams working towards chartered status.

Moving up to fifth in the ranking, from seventh last year, Arup had the highest growth in planner numbers of any top ten firm in 2017/18, increasing by 13 to 94. Chris Tunnell, Arup’s UK planning, policy and economics group leader, says this reflects a longer-term growth trajectory at the company, underpinned by strong client retention and enhanced by winning work on major projects such as the High Speed Two (HS2) rail link. Tunnell says the growth has been seen at both director level and in more junior positions. Arup’s London office grew by five planners, from 30 to 35.

Returning to the survey after a nine-year absence as a new entry in sixth place, GVA reports 91 chartered planners and 113 planning fee-earners. The firm boosted its planning presence in the North West with the acquisition in May of Manchester-based HOW Planning, which had 16 planners in last year’s survey. Since the survey was conducted, GVA has announced a deal that will see it taken over by Canadian real estate firm Avison Young. In seventh place, RPS Group saw chartered planner numbers fall by 22 in the past year to 89. Its London office saw a drop of almost half – from 57 to 32 planners. According to divisional managing director David Cowan, the fall in headcount is due to a number of very senior planners retiring: "It’s a more competitive market and there are not many people moving at the moment as the economic outlook is uncertain," he says.

Pegasus Group, ranked eighth, saw chartered planner numbers increase in the past year, from 70 to 75, and its planning fee-earners rise, from 193 to 219. According to managing director Tony Bateman, this was a result of a business plan drawn up by the company in the wake of the EU referendum to diversify its services and geographical spread "to insulate us from low levels of economic growth". In the past year, Bateman reports, Pegasus Group has opened new offices in Peterborough and in Birmingham city centre, and has expanded its service lines in areas such as minerals, energy and waste.

Making up the top ten are AECOM and CBRE, where chartered planner numbers are unchanged since 2017. At 11th placed Peter Brett Associates, which merged with Canadian-based practice Stantec in September, this year’s figure of 45 chartered planners includes seven mainly Londonbased staff not included in last year’s count because, according to planning director Jane Hirst, "they sit outside our dedicated planning team". Strutt and Parker in joint 12th increased its chartered planners from 40 to 44. This followed last year’s merger with BNP Paribas Real Estate, which, the firm said, provided it with new clients. "We have seen a significant increase at associate and director level since the merger," says Nicola Bickerstaff, associate director for development and planning.

Atkins is at 14th, with 40 planners, compared with 35 last year. Joanne Farrar, practice manager for the planning, economics and heritage team, says: "Staff turnover has been higher than normal so we’re having to work harder to recruit." A top 20 firm that experienced strong growth in planners is Bidwells, up to 15th from 20th last year. Its planner numbers rose from 32 last autumn to 38 this September. Planning partner David Bainbridge says this was due to colleagues gaining chartered status and recruitment, mainly below partner level, targeted in the Cambridge-to-Oxford growth corridor. Bidwells’ Cambridge office has grown from 11 to 18 planners in the past year.

In 16th place, Iceni Projects has seen its chartered planner total go up to 36 since last autumn. Head of human resources Madi Moraru says several members of staff achieved chartered status in the past year, while the company has also grown its heritage business. Meanwhile, its London office has grown by six planners, from 24 to 30. Just outside the top 20, Jacobs’ planning team has increased by seven planners and ten planning feeearners since September last year. According to divisional director Suki Coe, this was due to the takeover of engineering firm CH2M. 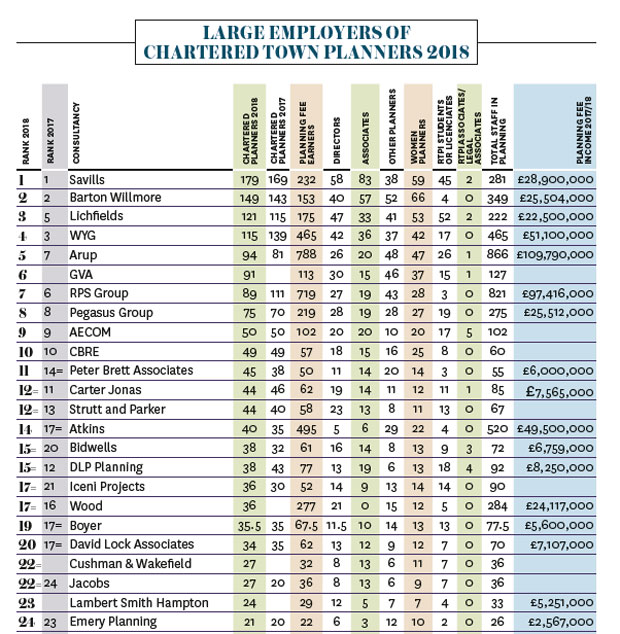 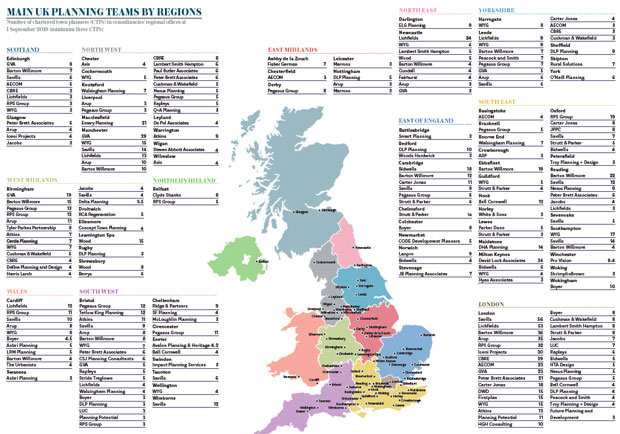