With Brexit looming next March, and a "no-deal" scenario a very real possibility, the 2018 Planning Consultancy Survey unsurprisingly indicates growing pessimism about the economy over the next year. This year, we received usable responses from 128 companies from across the UK. Only 13 per cent think the economic climate for development will improve over the next 12 months, compared with 24 per cent last year and 40 per cent in 2016.

Yet despite the gloom and an apparent slowdown in planner headcount growth, 60 per cent of firms think their planning team will grow in size in the next year, the same proportion as last year. David Jackson, head of planning at Savills, says: "Clearly, Brexit introduces a period of uncertainty, but we are not seeing that impact on the rate of new instructions as yet. So we continue to trade on the basis of what is in front of us, which is a very active and diverse marketplace."

James Fennell, chief executive at Lichfields, adds: "All sectors will potentially be affected by uncertainty surrounding the approach of Brexit. But the need for infrastructure investment and the housing crisis aren’t going to go away any time soon, so once we shake off the uncertainty surrounding Brexit, the medium and long-term outlook for planning consultancy services is very good."

Work on commercial and industrial development grew by four per cent in 2017/18, and is predicted to grow by six per cent next year. According to David Lock Associates business partner Nick Freer, demand for this type of advice was boosted by the recent boom in online retail and the consequent increase in the need for logistics space from the likes of Amazon and third party delivery companies.

Freer says growth in housing and logistics are underpinned by structural issues – undersupply and internet shopping respectively – and will therefore continue to grow in the year ahead, Brexit or no Brexit. "While elements of uncertainty remain in the short term, long term commercial trends and demographic pressures continue to mean that there is a need and opportunity for investors and developers to make plans now that look beyond the immediate time horizon," he says.

Also among the fastest-growing sectors were leisure projects and district-wide planning strategies. But while all these sectors are predicted to show strong growth in the year to March 2019, the top performer is tipped to be transport planning, with eight per cent expansion expected.

According to Freer, progress on transport infrastructure work next year will provide a stimulus for long-term planning in other areas, such as housing and logistics, which bodes well for consultancies. "Commitments given to investments in new infrastructure provides prompts to both public and private sector to look at how the geography of places is changing and bring forward new investment opportunities," he says.

Work on commercial and industrial development grew by four per cent in 2017/18, and is predicted to grow by six per cent next year. According to respondents, retail planning work actually dropped slightly in the past year – the only sector to have done so – with further decline predicted next year. Fennell says: "The retail and food and beverage sectors are having a tough time of it at the moment. The future is residential-led mixed-use developments in town centres – and in some out-of-centre locations as well."

Infrastructure planning accounted for a significantly larger proportion of reported earnings among consultants in 2017-18 than in the previous year. It rose from generating 35 per cent to 41 per cent of consultants’ reported income.

But the proportion of consultants’ income derived from specific development schemes that are not infrastructure projects fell to 47 per cent in 2017-18 compared with 54 per cent the previous year. The most lucrative sub-sectors were transport planning, accounting for 24 per cent of total income, and greenfield housing (18 per cent). 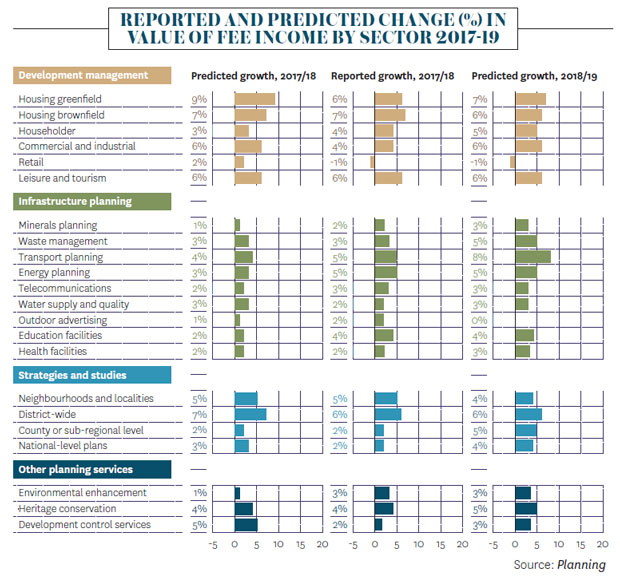