The Poole Local Plan was adopted on 13 November, following receipt of the examiner’s report in October. The plan is the first to be adopted by a Dorset district since the North Dorset Local Plan in January 2016.

Next April, a new unitary authority is due to take over the functions currently held by Weymouth and Portland, West Dorset, North Dorset, Purbeck and East Dorset Councils. A second will take on powers held by Poole, Bournemouth and Christchurch councils.

The forthcoming changes have already prompted Christchurch and East Dorset, which worked together on a joint core strategy adopted in 2014, to commence separate local plan reviews. Weymouth and Portland and West Dorset Councils are reviewing their 2015 adopted joint plan. 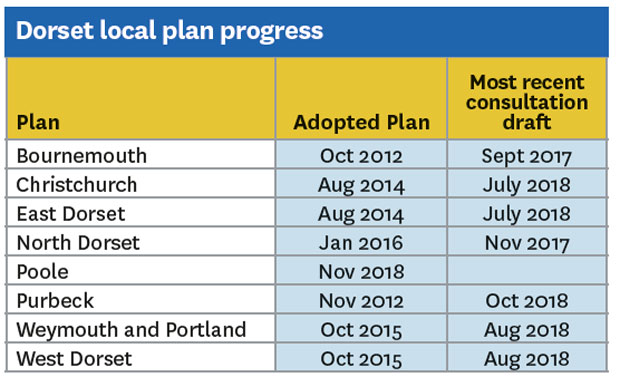 Dorset: Poole Borough Council adopted its local plan on 13 November. The plan sets a stepped housing requirement of 710 new homes per annum from 2018 to 2023 and 815 from 2023 to 2033. Adoption follows receipt of examiner Malcolm Rivett’s report, which found the plan sound subject to modifications.

Kent: Thanet District Council submitted its draft local plan on 30 October. It makes provision for 17,140 new homes up to 2031.

Essex: Basildon District Council has published a revised draft local plan, out to consultation until 17 December. It makes provision for 17,791 homes up to 2024, including 7,072 on sites removed from the green belt.

London: City of London Corporation has published a draft local plan for consultation until 28 February 2019. It proposes to allow for an increase in office floorspace of two million square metres to 2036, provision for 146 new homes a year, and requires major developments to meet crowded places and counterterrorism measures standards.

London: Westminster City Council has published its City Plan 2019-40. The plan, out to consultation until 21 December, proposes an annual housing target of 1,495 new homes and a hew homes affordable housing requirement of 35 per cent.

Tees Valley: Middlesbrough Council has published a publication draft local plan. Out for consultation until 21 December, it seeks to develop Middlesbrough as the city centre of the Tees Valley.