Last week, the government published figures showing that the number of new homes created in England last year, through both construction and conversion, reached 222,190. This is the highest figure since before the 2008 crash and the second highest in the past 30 years. For planners, the net additions figure – a two per cent rise on last year’s total – has a significance beyond its contribution to tackling the housing crisis. These numbers, broken down by local authority, form the basis of the government’s new housing delivery test (HDT), designed to ensure that local authorities actually build enough homes as well as plan for them.

The test works by imposing various sanctions on authorities who fail to deliver over three years against their housing requirement. Authorities who deliver less than 95 per cent of their requirement must devise an action plan to address the problem. Those who deliver less than 85 per cent must also identify a "buffer" of 20 per cent more housing sites to add to their land supply position, while those delivering less than 25 per cent face the National Planning Policy Framework’s presumption in favour of sustainable development.

The government will formally publish its first delivery test results, for the three years from 2015 to 2018, before the end of this month. However, research by Planning (see chart below) using the latest net additions figures suggests that just over a third of councils are set to face a sanction under the test. Our findings, as you might expect from the latest output results, show an overall improvement in authorities’ position under the test when compared with a previous Planning analysis in April, which looked at authorities’ 2014-17 delivery rates. Following the delivery test criteria, we compared net additions in 2015-18 to each councils’ housing requirement, using analysis by the Planning Advisory Service (PAS) of household projections, along with the latest local plan data.

We found that no authorities are set to fail on the 25 per cent threshold and face the most severe penalty. In fact, almost two-thirds of authorities – 62 per cent – are above the 95 per cent threshold and face no HDT sanction at all. This shows a rise from 54 per cent compared with our April analysis. Our research suggests that 38 per cent of councils will have to produce an action plan, while 31 per cent will be required to have a 20 per cent buffer in their housing land supply. Matthew Spry, senior director at consultant Lichfields, whose own analysis has produced similar overall findings, said: "The way the test has been set up in the first year, it’s virtually impossible for authorities to fail."

However, problems are likely to come in subsequent years, commentators predict. Next year, the delivery test threshold for the presumption penalty will be raised to 45 per cent of delivery against the target, and in 2020 to 75 per cent. Planning’s research found that nine councils had a delivery rate of under 45 per cent in 2015-18. According to an analysis by Lichfields of the test’s impact in 2020, around a third of authorities could fail the 75 per cent test. Lichfields’ numbers suggest a particular problem in London, where housing demand – and therefore requirements – are highest. Its analysis found that four out of five authorities are set to fail in two years’ time on current signals. Spry said: "It’s very hard to see many of the London authorities meeting the test."

PAS programme manager Richard Crawley warned that boosting delivery rates can take time. He said authorities allocating a diverse array of sites and tenures of housing can help, but added: "It’s years and years before these actions feed in to improvements in delivery. But the way the government has introduced the test, it’s coming in so quick. There is a risk that councils just give up."

Jonathan Dixon, an associate director at consultancy Savills, said he isn’t aware of any authorities taking the threat of future failure of the test seriously now. "Many are focused on getting local plans in place," he said. However, given how long it is likely to take authorities to make any dent in delivery rates, Spry said this would be a mistake. "It takes a minimum of three years to get a site through the system. If they think they are going to fail, the time to be taking action is now," he said. 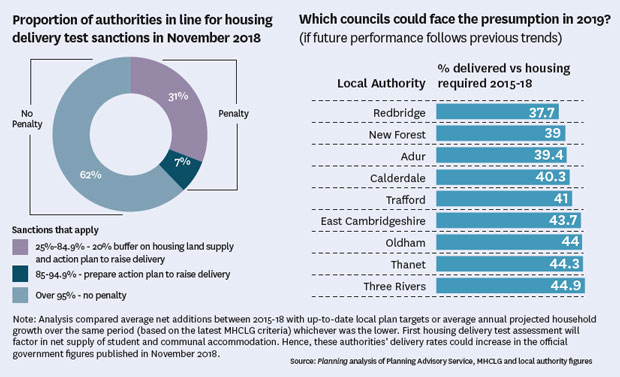