The plan provides for a total housing requirement of 15,950 new homes over the period from 2011 to 2031, including 2,750 to help meet needs arising in Oxford City Council’s rea. The homes are to be provided through a stepped approach, with all the city’s needs being met in the last ten years of the plan period.

Adoption of the West Oxfordshire plan follows submission this spring of Cherwell District Council’s partial plan review, and of Vale of White Horse District’s part 2 local plan. Oxford City Council has been assessed as having an unmet housing need of 14,300 homes by 2031 due to the physical limitations of the city’s boundaries as well as environmental capacity limits, including extensive green belt designations. 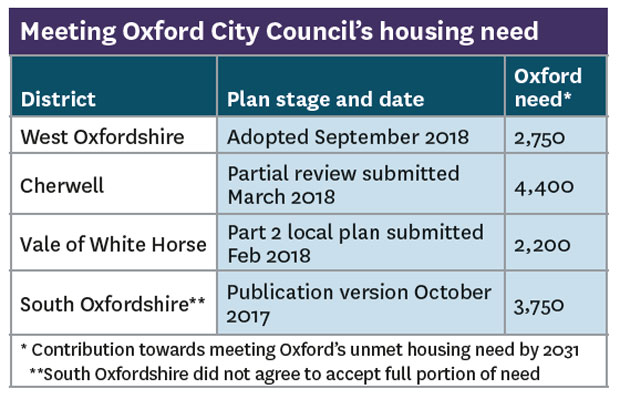 Cambridgeshire: South Cambridgeshire District Council adopted its local plan on 27 September. The plan includes provision for 19,500 new homes in the period from 2011 to 2031 as well as 22,000 additional jobs.

Oxfordshire: West Oxfordshire District Council adopted its local plan on 27 September. The plan provides for at least 15,950 homes in the period from 2011 to 2031, including 2,750 homes after 2021 to meet Oxford City Council’s identified housing needs.

Leicestershire: The inspector’s report on the Melton Local Plan was published on 14 September. Inspector Mary Travers found that the plan is sound subject to modifications, including a stepped approach to housing delivery and clarification of sources of supply.

Bedfordshire: Bedford Borough Council published its proposed submission local plan on 18 September. The plan, which is out for consultation until 30 October, states that a minimum of 3,636 new homes will be allocated to cater for housing need up to 2030.

Kent: Tonbridge and Malling Borough Council published its pre-submission local plan on 1 October. It makes provision for at least 6,834 new homes in the period up to 2031 and is out for consultation until 12 November.

Nottinghamshire: Mansfield District Council published its publication draft local plan on 20 September. The plan includes provision for at least 6,500 new homes between 2013 and 2033, with 90 per cent of these being in Mansfield urban area.