Last week’s publication of revised projections of the number of households likely to be formed over the next two decades contained huge reductions in the scale of growth anticipated. The government’s Office for National Statistics (ONS) estimated that more than four million new households will be formed between 2014 and 2039. That’s nearly 1.2 million fewer than projected just two years ago – a drop of almost a quarter.

The introduction in July of the government’s new standard method for assessing housing need has reinforced the household projections’ central role in the calculation of local housing requirements. The standard method uses the projections as a starting point for calculating each council’s objectively assessed need and then applies an "affordability adjustment" in high demand areas and a "cap" to limit changes.

Many councils have seen dramatic drops in their housing need as a result of applying the standard method to the projections. According to consultancy Bidwells, 17 see their need fall by more than 50 per cent and 73 see it cut by more than a third. Areas of both high and low housing demand appear to be significantly affected, with both Cambridge and Blackpool projected to see real terms reduction in households (see graphic below).

The government pre-empted the effect of the new figures in July, saying it would consider "adjusting" the method once the projections were published. A spokesman for the Ministry of Housing, Communities and Local Government confirmed that this week, though he declined to say when the consultation would happen. Also mitigating the new figures’ impact is the fact that only local plans submitted for examination after 24 January next year should base their need upon the standard method – by which time the government will have changed the formula.

In the meantime, councils, many of whom have been fighting local opposition to proposed development in their local plans, have still been given a significant headache. Paul McColgan, associate director at consultancy GL Hearn, said: "For those local authorities that have struggled to get high housing numbers, this is a real kick in the teeth and might embolden localresistance." Richard Crawley, programme manager at the Planning Advisory Service, said: "What councils need is clarity on what’s going to happen next. The risk is that councils that had proposed doing difficult things in their plans as their part of a national imperative will now face extremely organised resistance."

Simon Elliott, planning associate at Bidwells, said the government needs to consult on a revised methodology in the next fortnight to avoid a hiatus as authorities "haven’t got a clue" what their housing need number will end up being. Cristina Howick, planning partner at consultants Peter Brett Associates, said local authorities will be putting plan-making on hold: "This is a disaster because so much turns on this number. They’ll be asking whether they need a new settlement, or a green belt release."

The numbers also have an immediate impact on decision-taking. In areas without an up-to-date local plan, the calculation of a council’s housing land supply is now based upon the requirement derived from the standard method. Some authorities who may have previously failed the five-year supply test will now overnight find themselves able to pass it. Jonathan Dixon, associate director at consultancy Savills, said: "Where applications and appeals previously stood to be approved, they might well now be refused."

Andrew Lowe, senior planner at consultants Turley, said this issue has "created chaos" among developers arguing appeals on the basis of lack of five-year supply. He said: "It’s already causing harm. Strong housing land supply cases have fallen apart." But despite the big number changes, Elliott said authorities should resist pressure to rip up existing plans or housing supply statements, at least until the government consults on changing the standard method.

Some councils whose housing need drops significantly said they intend to carry on as planned. Oxford City Council, whose need drops by 86 per cent, said it does not hold much stock in the new projections. Alex Hollingsworth, the board memberfor planning and transport, said: "While we are still considering the implications for Oxford, we have no intention of changing our timetable for publishing our draft local plan this autumn. Given that Oxford is the least affordable city in the UK, and has demonstrated need for affordable housing alone of more than ten times the household formation projections, it is quite clear that that these new figures don’t reflect reality."

Tracy Harvey, head of planning at St Albans City and District Council, whose projected need drops by a third, said it is "too early to say" what the impact of the new projections would be and "will largely depend on" the outcome of the government’s review of its standard method. "Once we know that, we will be able to see if there are any implications for our draft local plan," she said.

However, some councils have responded differently. Last week, Wirral Council in Merseyside announced that it wants to row back on its draft local plan proposals to release almost 50 green belt sites for homes. The council said the new projections mean its annual housing need has almost halved, from 800 homes to 500, under the standard method. But Elliott said: "Authorities need to carry on as they are. A knee-jerk reaction to reduce targets is not likely to be supported." 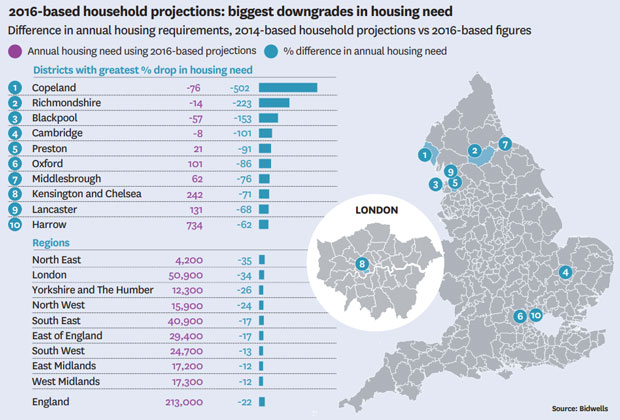