Research published last week by trade body the Home Builders’ Federation (HBF) and construction data fi rm Glenigan showed the number of housing units given planning permission has reached the highest level for at least a decade. In the 2017 calendar year, the study found that local authorities in England permitted 351,169 units, compared to 293,127 in 2016 and 260,778 in 2015. The numbers have more than doubled since 2009, when 162,204 units were granted permission. 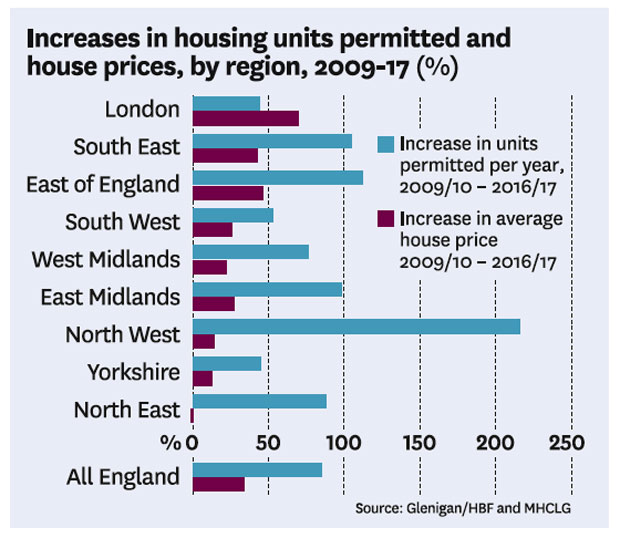 The Glenigan and HBF data shows the dramatic growth in the number of homes permitted has raced ahead of growth in the actual number of residential planning permissions. Most of the increase in the number of homes permitted has instead come from a trend toward bigger housing sites. Where an average residential permission in 2009/10 was for 14.1 homes, by 2016/17 it was for 18.4. Hugh Ellis, head of policy at the Town and Country Planning Association, puts the increase in permitted units down to policy changes from 2010 onwards, including publication of the National Planning Policy Framework (NPPF), designed to ease the planning system for developers. "This is the product of straight down the line deregulation, and there’s nothing good to be said about it. It’s leading to permissions creating the slums of the future."

However, a closer examination of the data would suggest that the increase in units consented is not solely a response to a relaxation of planning rules, which you would expect to result in an increased proportion of applications being approved. But government statistics on major and minor residential applications show exactly the same proportion (80 per cent and 73 per cent respectively) being approved in 2017 as 2012, the oldest fi gures available. Data for all approvals show only a small uptick from 85 per cent in 2009/10 to 88 per cent in 2016/17.

Some commentators say the most immediate cause of the rise in permissions is that developers are submitting more applications in response to strong housing demand, refl ected in sustained year-on-year house price growth since 2010. Christine Whitehead, emeritus professor in housing economics at the London School of Economics and a member of the government’s build-out review panel said: "These permissions are in response to people asking for them. Developers and landowners feel there’s value in getting them – it’s fundamentally demand-led."

Whitaker, however, like Ellis, also believes that government policy is a key factor behind the growth of homes permissions, though he sees it as a positive. Since 2010, the government has introduced the NPPF’s presumption in favour of sustainable development and penalised authorities that cannot demonstrate a five-year housing land supply, leaving them vulnerable to speculative applications. Furthermore, regional data compiled by Planning comparing units granted with house prices (see graphic p6, bottom.) shows that areas with the strongest demand have not necessarily seen the biggest growth in permitted units, indicating that other factors are at play. Whitaker said: "More permissions are absolutely the result of the NPPF and the more pro-housebuilding planning system. It’s all a direction of travel from government saying that authorities have got to grant the permissions needed."

Rachel Clements, senior planner at consultant Lichfields, agreed that the introduction of the NPPF combined with the adoption of more post-NPPF local plans were "key drivers" in the growth in permitted homes. With a current surge in local plan formation, Clements said this trend should continue: "A lot of the local authorities without post-NPPF adopted plans are in areas of high housing demand," she said. "In the coming years, they will be moving towards adoption and allocating housing sites of a range of sizes. Whether permissions on such allocations come forward will likely depend on whether the developer can achieve the necessary sales, among other factors, but the location of these sites will probably have some bearing."

Looking ahead, Philip Barnes, group land and planning director at housebuilder Barratt Developments said the draft revised NPPF "provides grounds for optimism that the good supply of planning consents will continue". However, he said there are "concerns that the proposed changes to how housing land is valued could potentially dissuade landowners from releasing consented land if it results in housing land prices being below the threshold at which landowners will be willing to sell".

If both policy and market factors have driven the increase in permitted homes, what does that say about how quickly these will be built out? A year-on-year comparison of units permitted with completions and conversions (see chart, below) shows that the number of new homes created is some way below those consented, but the former figure has followed the latter’s rise. A study by Lichfields last year found that for the government to reach its target of 300,000 homes built per annum would require in excess of 400,000 permissions per year, partly because not all permissions are built out, and partly because larger sites deliver homes more slowly. Paul Miner, planning campaign manager at the Campaign to Protect Rural England, said housebuilders’ current preference for large homes on large sites raised serious questions over how quickly homes would be delivered.